Our Budget Secret Mage deck list guide for the Kobolds and Catacombs expansion will teach you how to play this Tempo Mage list. This Budget Secret Mage guide includes Mulligans, Gameplay Strategy, Card Substitutions, and Combos/Synergies! 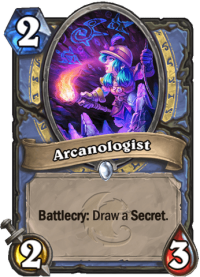 At certain points in the Journey to Un’Goro meta, Secret Mage was a top tier deck. The addition of Arcanologist made it possible to consistently get Secrets in play and take advantage of the numerous Secret synergy cards.

In Kobolds and Catacombs, Secret Mage gained some new tools, including Explosive Runes, which has become a mainstay in Mage’s tempo-oriented Secret package.

This budget version of the deck does lose out on some of the tempo swings enabled by Medivh's Valet and Corridor Creeper, as well as value generator Primordial Glyph, but can hold its own on the Standard ladder with some cheaper alternatives.

Secret Mage relies heavily on generating pressure in the early game with minions. As such, landing a Mana Wyrm into Arcanologist and Kirin Tor Mage is the dream. Early board presence can leave a clear path for your Kabal Crystal Runners to the opponent’s face.

With enough consistent pressure applied at the start of the game, the deck has a formidable amount of late-game burst in the form of both spells and minion buffs. On top of Fireballs, Bonemares and Firelands Portals can contribute to a finishing blow.