Our Mecha’thun Priest deck guide goes through the ins-and-outs of this popular deck from The Boomsday Project expansion! This guide will teach you how to mulligan, pilot, and substitute cards for this archetype!

The Boomsday Project, compared to other expansions, has been pretty conservative in terms of absolutely crazy cards, but there is one insane exception to the rule: Mecha'thun.

Dr. Boom’s most cruel invention enables a whole lot of new combo-based archetypes. And while decks that play Mecha'thun were expected to see few play, those lists seem to be played a lot, and that with a lot of success!

Mecha’thun Priest might be one of the more complex archetypes involving Boomsday’s craziest minion, and there’s one even crazier minion that makes the whole archetype work: Reckless Experimenter. The discount on deathrattle minions brings two other cards on board that have served only as memes in the past so far, Coffin Crasher and Ticking Abomination. The combination of these four cards, the ultimate deck thin mechanism Hemet, Jungle Hunter and the insane control/card draw toolkit of the class makes Mecha’thun Priest a serious tier list contender.

Check out alternative versions of this deck on our Mecha’thun Priest archetype page!

The win condition for every Mecha’thun deck is the same: When Mecha'thun dies it destroys the enemy hero, but only if you have no cards in hand, no cards in your deck, and no minions left on the board. 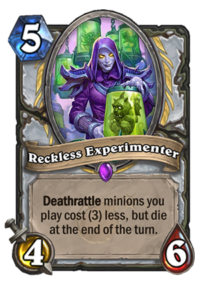 The particular combo that Priest uses to achieve this sounds both insanely creative and extremely ridiculous. On turn 10, you need the following five cards and ONLY those five cards in your hand:

First, there is Reckless Experimenter. This 5 mana 4/6 makes deathrattle minions much more cheaper, but they die off at the end of the turn. What normally could be a disadvantage exactly serves the purpose of winning with Mecha’thun Priest.

The second combo piece is Coffin Crasher. Its deathrattle effect puts out a random deathrattle minion from our hand onto the battlefield. In our deck, Coffin Crasher has one and one purpose only, and that is to introduce Mecha'thun to the deadly combo stage! 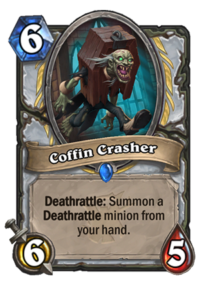 Last but certainly not least, two copies of Ticking Abomination serve as the last two combo pieces. Wait, Ticking Abomination? The biggest meme card in Hearthstone history introduced with Knights of the Frozen Throne? You read that right. Not a single normal deck would want to see his board explode as a deathrattle effect, especially not one but two times.

Oddly enough, Mecha'thun needs exactly that, and this way a card that has been laughed at since its reveal finally finds at least some purpose in the Hearthstone world.

So how does the combo work? First you play Reckless Experimenter so that you get a discount on your other combo pieces. Next off is Coffin Crasher to guarantee that its deathrattle resolves FIRST on board. Order of play in this case is essential, because otherwise Mecha'thun won’t hit the board at the right time.
After that you play the two copies of Ticking Abomination, and the last action of the game is to end your turn. This way, Coffin Crasher’s effect will resolve first, pulling out Mecha'thun, and after that both effects of Ticking Abomination get triggered, killing your Mecha'thun with no minions left on your side of the board and no cards in hand, which results in glorious victory!

Well that doesn’t sound quite as complicated now, right?! But as always, the hard part of a combo deck is to get to the actual combo. However, Mecha’thun Priest may have the most useful tools for that to happen. 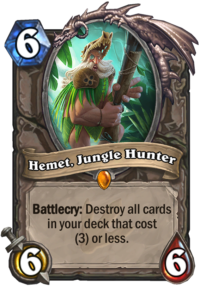 First off there is Hemet, Jungle Hunter. Saying that everybody’s favorite Warcraft lore character thins out your deck would be a vast understatement. That is why it’s utterly important to play Hemet as early as possible, because it directly feeds us combo pieces while getting to that inevitable turn 10.

To get to turn 10, however, may be a bit problematic. Divine Hymn should help in that regard and save you one or two turns per game. The same goes for Psychic Scream, one of the few cards that thankfully won’t get blown up by Hemet. This way you can guarantee to stall out the late game on your way to turn 10. Bloodmage Thalnos and Spirit Lash is the way to go against early board states, and Wild Pyromancer gives you additional reach in terms of effective board clear.

Next off is one of the most iconic card packages in the game, Priest’s card draw engine. Including cards like Northshire Cleric, Power Word: Shield, Circle Loot Hoarder, Wild Pyromancer and Acolyte of Pain guarantee to draw into more card draw, important combo piece or Hemet eventually.

In fact, it’s really important to weigh out your draw options, especially against control archetypes. Burning cards due to overdraw may be Mecha’thun Priest’s biggest enemy.

All in all, this deck is a whole lot of fun to play, and it will certainly has its place in the meta game on way or the other.

The current meta game doesn’t allow specific matchup and mulligan guides yet, but we can already offer general advice in terms of general matchups:

Control Priest lists have always done well against hyper-aggro lists, and Mecha’thun Priest is no exception. The amount of repetitive board clear against low-health minions is a great way to survive into the later stages of the game. Just remember to use your card draw capabilities to defend the board, because you will draw enough eventually anway. Mulligan hard for Wild Pyromancer and Northshire Cleric, and don’t hesitate to play them as early as possible. Don’t be greedy, because your list itself is greedy enough for the both of you

What this list can’t deal with is huge early threats, and that is why we don’t perform very well against mid range decks. Minions like Mountain Giant and Devilsaur Egg can be a real pain and almost always requires you to use Psychic Scream as early as possible. Try to mulligan hard for Hemet so that you have at least some board threat in the mid game.

This deck can absolutely destroy control archetypes. If you play Hemet on curve you have very good chances of getting off your combo on turn 10. Archetypes like Malygos Druid, Togwaggle Druid or Shudderwock Shaman can’t establish enough board threats on average to outrace you on the way to turn 10. However, you should always take care of your hand size, because Naturalize is a real threat at any time in the game.
Other than that, it is imperative to hard-mulligan for Hemet every single time. Try to make drawing plays in the mid-game, because you don’t want to draw many cards too early, because you might not be able to use them that early.

Awaken the Makers. Many pros and streamers play a version of this deck that involves the Priest quest. We’re not a fan of it because it can disrupt your way to get the combo, and Amara can become a pretty clunky card in your hand towards the end. It is by no means a bad iteration of the deck though and yield good results while being fun as well.

Gilded Gargoyle/Shadow Word: Death: This is the third famous iteration of the deck. It doesn’t rely on the Reckless Experimenter interaction but rather kills Mecha'thun on turn 10 with 3 coins and Shadow Word: Death in hand. To get to that combo you need to pilot your deck very well, and that includes way more thinking compared to the combo pictured above.

Doomsayer: Doomsayer is an interesting tech choice. We know our weakness, and it involves early board threats, especially ones with high health. Playing Doomsayer can be as good as healing for 7 over one turn, or a much-needed board clear, and that is even better. You have to sacrifice draw for it though, so try to remove a Loot Hoarder or one copy of Acolyte of Pain for it.