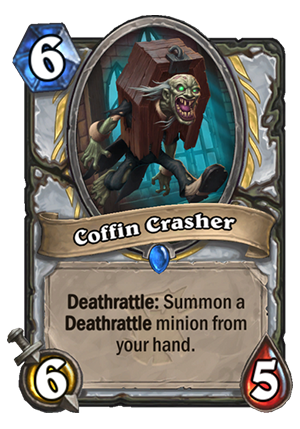 Coffin Crasher is a 6 Mana Cost Rare Priest Minion card from the The Witchwood set!

Deathrattle: Summon a Deathrattle minion from your hand.

Look! Priest got his own Voidcaller! And as we all know, the ability to summon cards from your hand without paying the cost can be very, very powerful.

Let’s start with the stat-line. It’s GREAT, and I mean it. When seeing such a powerful effect, you’d expect something like a 3/3 (just look at the Possessed Lackey – it’s a 5 mana 2/2 for a reason). Yes, summoning from your hand is a little worse than Recruiting, because you’re losing card advantage, but that can still be a massive tempo swing.

Just imagine getting this into Obsidian Statue. You’ve paid 6 mana to get a 6/5 that Deathrattles into a 4/8 Taunt with Lifesteal and a powerful Deathrattle. Great! But even the worse scenarios are also good. Cairne Bloodhoof, Bone Drake or even the new Rotten Applebaum seem like great cards to get from this guy.

I could totally see this in a kind of Midrange Deathrattle Priest deck, maybe with some Dragon synergies too (Bone Drake). It could also play Carnivorous Cube to make some of those Deathrattles even better. While pulling Cube from this one might not be that optimal, it’s still a 6/5 that Deathrattles into a 4/6, which would be good tempo if anything.

Maybe Quest Priest? But I’m not sure whether a deck like that would actually want to play Quest. I imagine something more proactive, and proactive decks would suffer quite heavily from having to start with 1 card less every game. Plus getting to 40 health is not as important if you’re the one dictating the pace of the game. Still, Quest might be a good choice if the meta demands it.

Yes, this card loses to Silence, but it’s actually not that bad. You still have a 6 mana 6/5, it’s much better than most of the cards that are good Silence targets. The Lackey I’ve mentioned before for example – you’re left with a 6/5 not a 2/2. You can trade into the Spellbreaker and still have a 6/1 alive, meaning that you haven’t really lost any tempo that way.

I understand why they’ve waited before N'Zoth, The Corruptor rotates out before introducing this card. It could be seriously broken in a N’Zoth deck.

I have to say that this card is very powerful, but it might be hard to find the right deck for it. If such a deck is found, however, this can be pretty broken in some situations.