Unlike other classes, the life of Warrior never really took incredibly exciting turns during the Year of the Raven. We have seen some exciting lists like Rush Warrior, a tempo-driven midrange deck focussing on continuous board pressure, Dead Man’s Hand Warrior, the hyper-control and skill-intensive fatigue powerhouse, or Recruit Warrior, probably the most board-swing-centric archetype of all times.

But in the end it was the Odd Warrior archetype that dominated the tier lists and presented itself as the “control counter” in competitive line-ups. The ability to literally tank up and out of dangerous early game board states against aggro opponents while being able to stay more than relevant in the later turns of the game makes Odd Warrior a great all-around choice for both casual and competitive play.

Will we see Odd Warrior persist through the rotation in the upcoming Standard year, or could the loss of important cards, the surge of OTK decks, and the release of the first 2019 expansion spark the flame for up and coming archetypes?

Both the beauty and inelegance of Un’Goro Quest card design were showcased by Fire Plume's Heart. 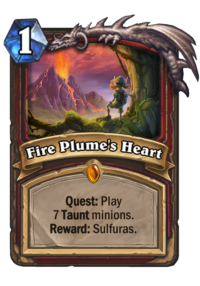 The flavour of obtaining Sulfuras, one of Warcraft’s most prestigious and powerful weapons, wielded by Ragnaros the Firelord himself, impressed not only lore nerds.

On the other hand, getting dealt eight damage for a mere two mana did the exact opposite, and thus the community was up in arms regarding a card that highly rewarded one-dimensional gameplay revolving around simple Taunt minions. Stonehill Defender as well as Direhorn Hatchling, Cornered Sentry and Ornery Direhorn played their important parts.

Not a lot of other archetypes received as much support within a single set, and that made Quest Warrior a popular archetype choice in the last two Standard years. During the Year of the Raven we saw Fire Plume's Heart almost exclusively built into the Odd Warrior archetype.

As already said on other occasions, Quest cards as a whole have been a great idea in theory, but Quest Warrior as the non-interactive and random archetype it was and still is will not be missed.

One honorable mention should go to Warrior’s best friend in the jungle, Elise the Trailblazer. One of the most unique legendaries that has been designed for control-heavy classes like Warrior will leave the stage, and with it the countless RNG-fests thanks to Un'Goro Pack.

Unlike Un’Goro, KotFT will not be missed by a lot of Warrior players. Both Blood Razor and Cornered Sentry have been staples in Tempo and Recruit Warrior. The same goes for Scourgelord Garrosh which has been the backbone of Dead Man’s Hand Warrior as well, together with – of course – Dead Man's Hand. In combination with Bring It On! it formed an incredibly complex archetype that tried to evade death by fatigue through shuffling its key cards into the own deck over and over again.

The loss of very niche class cards that formed not the most popular but incredibly unique archetypes supports the claim that Odd Warrior will keep the throne after the upcoming Standard rotation. 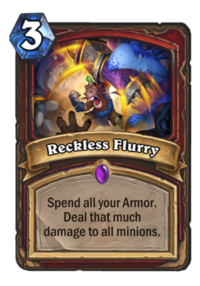 In Kobolds and Catacombs, Team 5 tried to push the Recruit keyword, and with that Recruit Warrior as an archetype. One could argue that the keyword really fits the Warrior fantasy about surviving early game pressure while cheating out big minions in the later stages of the game. However, as we can see with Big Priest, this behaviour within archetypes is not well received with the community due to its limit in interacting with it.

In the end, Recruit Warrior remained a unique but not very common list amongst Warrior players. On the other hand, other cards that didn’t push the Recruit theme like Drywhisker Armorer or Reckless Flurry are present in multiple Warrior archetypes up to this day and will be sorely missed.

Other than that, Warrior really didn’t use a whole lot of KnC cards, proving that the class adapted to a meta revolving around cards printed during the Year of the Raven.

As it is with the majority of Odd and Even decks, they will most likely survive the rotation into the new Standard year. Besides Odd Rogue, Odd Warrior may be one of the best and safest archetypes to pick in the chaotic first weeks after the new set release.

And not only that: Several odd-cost cards wait in the wings for their ten minutes of fame. May it be the mech package around Beryllium Nullifier and Bronze Gatekeeper or value-oriented cards like Darius Crowley and Rabid Worgen; either way, Odd Warrior will be a force to reckon with! 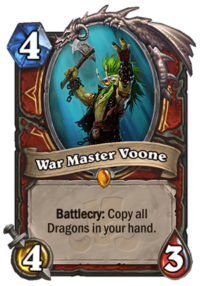 While we all know the Dragon Warrior of old days as known as Wallet Warrior, this new Dragon-based archetype could shake up the tier lists of tomorrow. Power level will be low across the board, and insane value cards with a solid stat line like War Master Voone could make the cut to support Dragon Warrior as a mid-range, value-based Warrior archetype with tons of removal.

Oh, the times we wanted to make Tempo Warrior work. This archetype showcases one of the core values of Warrior: Hitting your own stuff so you can hit other stuff even harder. Unfortunately, the archetype never really could make a big mark in the history of Hearthstone.

The Rush keyword was made for Tempo Warrior, and Rastakhan added interesting synergy with Spirit of the Rhino and Akali, the Rhino. While not very popular at the moment, this deck type performed incredibly well after Rastakhan release, especially because every opponent expects Odd Warrior as the played list.

Together with the big Rush package from the Witchwood expansion, Tempo Rush Warrior will most definitely make an appearance. Last but not least, most archetypes lose a lot of power – but not Rush Warrior! The deck has barely made it in the past, and the new Standard Year will give it the best shot ever to reign the tier lists.