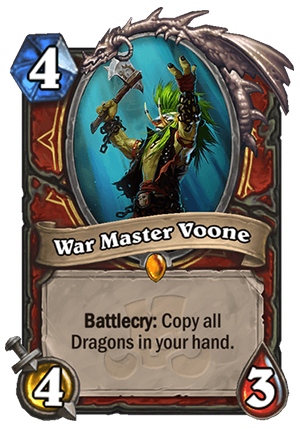 Battlecry: Copy all Dragons in your hand.

It’s pretty funny that the card was actually buffed somewhere during the design – they have first shown it as a 5 mana 4/4, but they’ve later clarified that it’s in fact a 4 mana 4/3. Technically seems better, but it’s a bit deceptive. Making it even-costed means that you can’t play it in Odd Warrior – my guess is that is something they were afraid of, Odd Dragon Warrior becoming too good. Now, the reveal of Smolderthorn Lancer makes much more sense – Dragon archetype is indeed an archetype they seem to be pushing, they didn’t just release one random card for it out of nowhere (it happens sometimes). But let’s talk about Voone.

4 mana 4/3 are not amazing stats, but the effect really and I mean really makes up for it. 4 mana 4/3 that draws one card would be solid – maybe not exactly in a slow, Control deck, but you get it – it’s not a bad value. So if this guy hits 2 or more Dragons, it already puts him significantly above average in terms of value. If you play a Dragon deck, adding more Dragons to your hand has another advantage – now you can start dropping them without worrying that you will run out of activators. And well, it also synergizes with Twilight Drake to a certain extent – if you copy a few cards, your hand size increases and you can drop a bigger Twilight Drake.

And if you really want to go for A LOT of value, copying or bouncing the card back (Zola the Gorgon, Youthful Brewmaster) is absolutely amazing. Let’s say that you started with 2 Dragons in your hand. After playing him once you had 4. But after you drop him second time, you suddenly have 8 – if you have enough hand space of course. This is something that could come handy in the slowest, value-oriented matchups – like how the Odd Warrior can use Zola to get an extra copy of Elise the Trailblazer.

I probably don’t have to say that if you would run the Dragon Warrior, this card would be an auto-include. But here’s the thing – Dragon Warrior is a deck that does not exist and hasn’t existed in a long while. To push an archetype like that, it needs A LOT of support. Just remember what kind of cards it took to make Dragon Priest viable. Being forced to build your deck around certain tribe which doesn’t have synergy between itself (unlike Murlocs, for example) makes it significantly worse, so the pay-off needs to be significant in order for it to make sense.

Right now, I don’t think that we have enough synergy to make it work. And while we’re at it, we need some more new Dragons. The current pool is quite small and hard to pick from, especially if you want to run a bunch of them. However, if they keep pushing the theme, I’m really excited to play some big Dragons again.

Card rating: 8/10 in Dragon Warrior… but we definitely need more synergies and good Dragons to push this archetype (and the card is obviously useless in non-Dragon deck)