Warlock is one of the top performers in United in Stormwind, and with the Questline here to stay, it is hard to see how Blizzard can top the sheer power of Questline Warlock. The OTK version is good at defending and fast to pull off the combo, whereas the Giants version just pulls victories out of nowhere. Neither list is getting any must-have cards in Fractured in Alterac Valley. However, there are some interesting tools for Warlock that could see more decks rise up in the new expansion. 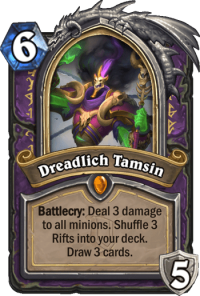 If this was any other era, Dreadlich Tamsin would be a mandatory inclusion in any non-token Warlock deck. Alas, we live in the time of the Questlines. Tamsin has some anti-synergy with The Demon Seed, so it remains to be seen whether they are stronger together or apart. Tamsin’s power might just be sufficient to convince people to play Warlock without the Questline. Barely.

Warlock is also getting a good chunk of support for Zoo-style decks, and there are multiple paths Zoo Warlock can take in Fractured in Alterac Valley. It will be interesting to see if any of them prove to be strong enough.

Finally, Warlock is getting a bunch of support for a Fel Warlock deck. Nonetheless, the Fel spell pool for Warlock seems lackluster. A card like Felwalker could be devastating with the right Fel spell pool, but with the current one, it does not seem to do much. I cannot imagine how to build a winning Fel Warlock deck with this toolkit. Maybe in the next expansion.

Zoo Warlock in Its Many Shapes

I can think of at least three ways to build Zoo Warlock in Fractured in Alterac Valley: Demons, Deathrattles, and Sacrifices. Demons would be the current style of Zoo that is already seeing play on the ladder. Add in Piggyback Imp and you’re done.

Nothing too spectacular, nothing too exciting. Just regular Hearthstone gameplay. As an upside, the deck is extremely cheap.

Things get more interesting when you start to work with more new cards:

Killing off your own stuff to summon better stuff is at the core of both concepts. Boneweb Egg and Nerubian Egg are the main sacrifice targets, although you can destroy some tokens or other Deathrattle minions too.

Fun fact: destroying Korrak the Bloodrager with a non-damage effect, such as Ritual of Doom does not count as an Honorable Kill, so Korrak comes right back as if he was hardly sacrificed at all.

Desecrated Graveyard is great at killing off your Eggs to keep new minions coming to the board. 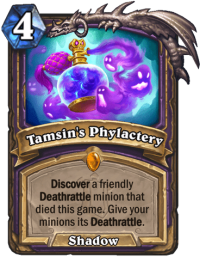 In this version of the deck, I focus on the Deathrattle aspect of the deck. Teron Gorefiend can destroy your Eggs and resummon them when he perishes later. Every Deathrattle in the deck is a summon effect, so Vectus‘s Whelps are guaranteed to summon something upon death. Finally, Tamsin's Phylactery can spread a summoning Deathrattle to a large pack of Imps from Fiendish Circle or Wicked Shipment.

Because I have some good Battlecry effects in the deck, I have chosen not to include Sacrificial Summoner. That would be the other way to build the deck, the path of pure Sacrifice. Cut Teron and Vectus to add Summoners and, ideally, find some room to add in cards like Injured Blademaster. This way you can sacrifice your Eggs to get some non-injured Blademasters on the board.

I think the Deathrattle path will be more consistent, as Sacrificial Summoner is the only card that can cheat out Injured Blademaster, but the potential explosiveness of the Sacrifice Zoo cannot be ignored.

Tamsin's Phylactery and Humongous Owl open up a path to a potential new OTK. Have the Humongous Owl die, summon a boardful of Imps with Wicked Shipment, kill them off with some area-of-effect damage like School Spirits, and deal 8 damage to up to 7 random enemies. Four hits is enough to OTK. 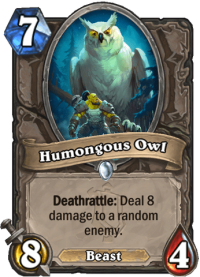 There are a couple of major questions about the deck.

First, what is the optimal way to pull off the combo? With some Runed Mithril Rods, it might be possible to add in a Twisting Nether to guarantee all the damage going to face. Maybe Soul Rend would be a fine board clear piece too.

Second, is this any better than the Questline OTK? In theory, this can be done on turn eight, and Runed Mithril Rod could speed it up. But while you don’t need to draw your entire deck, you do need to find just the right combo pieces, so often you need to draw a lot.

Overall, the Questline OTK seems more consistent, but this concept could be fine-tuned in playtesting to see how fast it can get.

The Giants version of Questline Warlock is sort of a Handlock deck, but could we also play a more traditional Handlock in the new expansion?

In this deck, I use Dreadlich Tamsin instead of the Questline to get some additional card draw and a Hero Power that does not hurt me. Full-Blown Evil adds more removal to the deck, especially as I do not want to use Soul Rend without the Questline. Finally, as the minions have some powerful Deathrattle effects, I have Tamsin's Phylactery to spread them to even more minions, such as the 3/3 Imps that are summoned by Tamsin’s Rifts.

I do not use Flesh Giants, as they benefit so much from The Demon Seed that it feels wasteful to include them in a deck without the Questline.

If this concept is sound, why is it not being played right now? All the big minions are already in the game. Can Tamsin and a couple of new spells make the deck so much better that you would skip the Questline for it? In theory, yes they can. The added removal can help the deck survive. Tamsin and her Phylactery can give it additional punch.

Alas, it remains questionable whether the Questline can be ignored even with these new tools.

The Tragedy of the Demon Seed

Warlock is getting some interesting new cards. There is ample support for Zoo and Dreadlich Tamsin is a powerful new Hero card. Only the Fel Warlock concept seems incomplete. Yet, the power of The Demon Seed cannot be denied. I am not sure whether these new cards can compete with the most powerful Questline of all time, nor whether the Questline decks need any of the new cards. Being at the top makes it hard to become even stronger.

What do you think? Warlock gets some new toys, but will they use any of them or just jam Questline Warlock like it’s the summer of 2021?