It’s almost time for the spooky season, and Hearthstone went all in on this year’s event! Last week, we’ve already announced that 23 Wild cards will be coming back to Standard temporarily, but we finally have a full list of those cards. And that’s not all there is to the event – more awesome stuff like Dual Class Arena coming back or new, seasonal Tavern Brawls with special rewards! We’ll also get a bunch of free packs and other goodies. However, let’s start with the most important info – Wild cards.

Wild Cards Coming Back To Standard

This is definitely the highlight of the upcoming event. 23 Wild cards are coming back to Standard until next expansion. Extra copies of those cards will be given out to players FOR FREE until they rotate out, which means that you don’t need a vast Wild collection to enjoy it. Extra copies can’t be disenchanted. The cards  will be playable in Standard only temporarily – once they rotate out, they go back to being Wild exclusive. Given that A LOT of staples are coming back, their impact on the meta should be tremendous. Here’s a full list of cards:

And here’s a full list of cards in a single, handy image: 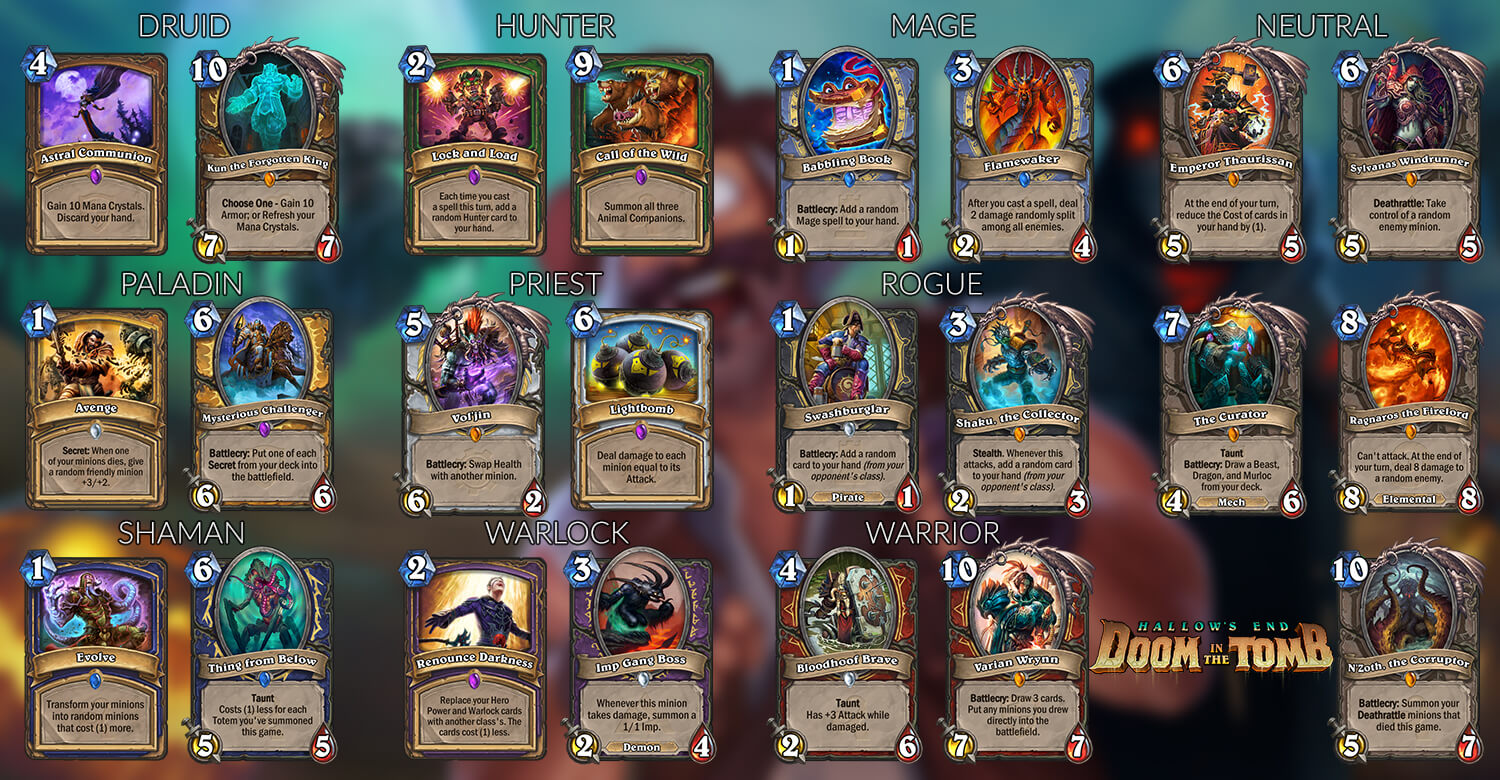 Log in any time during the event to get five free Card Packs – 2x Saviors of Uldum, 2x Rise of Shadows and 1x Rastakhan’s Rumble. No extra requirements – you get them for free!

Additionally, a new Legendary Quest will be unlocked at the start of each event’s week. They will give more card packs or extra gold! Remember that when your Quest log is full, a Legendary Quest will replace one of your current regular Quests, so try to keep free slots going into a new week!

One of the craziest and fan favorite Arena events is also coming back this year. It will work the same way as last time. When you start your Arena run, you pick a class. Then in the next screen you will pick a Hero Power from another class (so DO NOT pick the class you want to have Hero Power from first). After that, you will get offered class cards from both of those classes! This can easily lead to some really broken combos, as normally cards from different classes aren’t balanced around being played together in the same deck.

Weeks 1 and 2 of the event will award a free Arena tickets, so everyone can enjoy it without paying.

Players who already have an active Arena run will get it retired with a refunded ticket. Which means that if you want to maximize your profits, you can start an Arena run, play until you lose twice and sit on the run until event starts – you will get full rewards for however high you’ve got and a free ticket!

There’s also an Arena rotation coming, so the event will be played during a new Season. Here are the expansions that will be available to pick cards from:

Over the course of this event, we’ll have three new, unique PvE Tavern Brawls to play with.

Gear up with your favorite member from the League of E.V.I.L and delve into the Haunted Temple, full of the baddest bosses in Uldum! The clock is running, too – race to set the record for the fastest Temple run!

E.V.I.L has their turn, and now it’s up to Reno and the League of Explorers to join the run and flex their Temple diving speed. New enemies and challenges await!

Get ready for the big mix-up! In this Tavern Brawl, you’ll need to strategize around minions constantly rotating board positions – all while controlling the Horseman’s time-shifted Dreadsteeds!

Two new Card Pack bundles will be available for purchase in the store:

Normally for $19.99 you get 15 packs, so the bundles contain 5 extra packs each. They also give you a random Legendary cards on top of that, making it a pretty sweet deal.