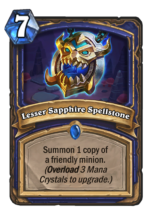 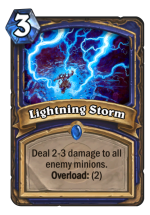 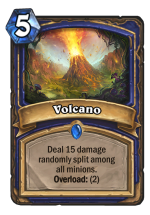 Lesser Sapphire Spellstone should be drawn asap to make sure you buff at least one through the game.

Fire Fly is the best 1 drop you can have in your opening hand as it puts a 1/2 body on the board and generates a 1mana elemental that you can later use to activate the Stone Sentinel.

Stonehill is a great taunt that generates another taunt and a good card to use specially if you don't have a spellstone in hand (so you don't waste your overload taunts like Feral Spirit or Drakkari Defender).

Lightning Storm and Volcano are great table clearing tools, however you should avoid using them without a spellstone in your hand.

OK, just to try something different with Shaman. 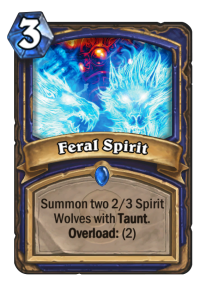 The idea is to control the board with removals like Lightning Storm or Volcano (from T5 you can have a guaranteed +1spell powered Lightning storm) and Taunts like Feral Spirit, Drakkari Defender, Stonehill Defender, Earth Elemental and an activated Stone Sentinel . 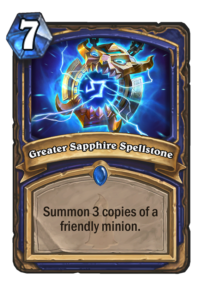 The main target for Sapphire Spellstone is a discounted (3mana or less) Snowfury Giant so you can play both cards on 1 turn. However if you have managed to stick a Baku the Mooneater, Earth Elemental or Alexstrasza, any of those are a pretty decent target as well. Worse case scenario u can use it on a Drakkari Defender to create a solid 4x 2/8 wall that can receive a Bloodlust  next turn to either trade against the enemy table or do 20dmg to the enemy’s face.

Best case scenario is to play the 4 x Snowfury Giants on one turn and Alexstrasza on the next turn (cos its very rare that your enemy managed to deal with all 4 Giants). 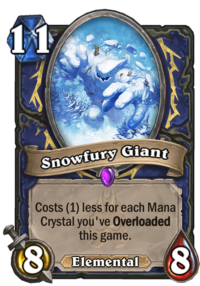 Is important to avoid using overload cards if you dont have a spellstone in your hand, as they need 6 overload cristal to achieve full potential.

I only used cards that i own, so some cards might not be optimal.