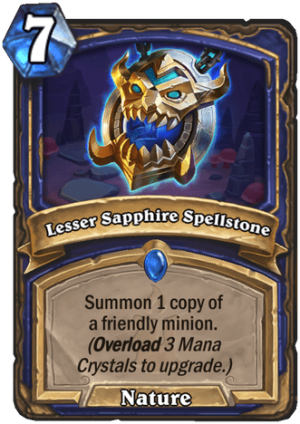 A stone of blue, embraced with glee
By murloc lords beneath the sea
Soon numberless they swarmed the shore
First two, then four, then more...and more...
Tweet

Unlike this card’s Druid alternative, the Sapphire upgradable spell does not look too exciting at first. It’s a class-restricted Faceless Manipulator on a spell, however it costs a lot more. In this frame, the Lesser version of the Spellstone seems unplayable, although an argument could always be made for critical mass – if your deck wanted Faceless Manipulator in the first place, wouldn’t it want more of them? Probably, but such a deck does not currently exist. It might however, once you unlock the Spellstone’s upgraded version. Even the first upgrade is already exactly opposite its Lesser version in terms of value – now costing less than two Manipulators while doing the same thing. The Greater version of this card is some amazing value, that much is certain.

Now, the question becomes “Can the Spellstone deck exist?” On one hand, Overload is bad. Not as a mechanic, but as a cost. It’s a drawback on powerful cards and as such, it is a punishing mechanism. Current Shaman decks actively avoid Overload cards, however we cannot overlook the synergy with the new Snowfury Giant from KFT. Keeping in mind that the vast majority of Shaman’s controlling tools are Overload cards, the “Overload deck” could become a real thing. I imagine it will have a somewhat similar play pattern to the current Evolve Shaman where they have the Doppelgangster + Evolve combo for two rounds of powerful board floods, except it’s a Snowfury Giant + Greater Sapphire Spellstone combo for two rounds of very, very powerful board floods of 4 8/8s. Something to keep an eye out for is the fact that the Spellstones only upgrade while they are actually in your hand (as far as we are aware right now, anyway), so that can be a major downside to this type of strategy.