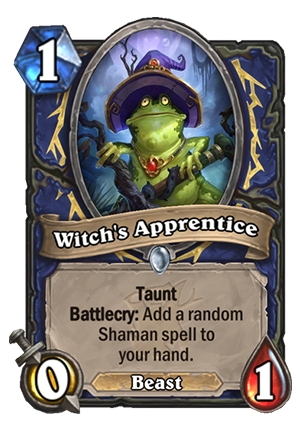 Witch’s Apprentice is a 1 Mana Cost Common Shaman Minion Beast card from the The Witchwood set!

Taunt Battlecry: Add a random Shaman spell to your hand.

It’s another card like Babbling Book in Mage or Swashburglar in Rogue. Those two have seen quite a lot of play, so this one might also do, right? Well, it MIGHT, but I think that the two cards I’ve mentioned are significantly more powerful.

First of all, the stats. You often drop those minions in the early game, especially on Turn 1. I can’t stress out how much better 1/1 stats are than 0/1 in the early game. 1/1 minion can actually trade into something, this just stops some damage (usually 1-2) and dies. Taunt is probably better in the mid/late game, and it has synergy with Flametongue Totem but against Aggro decks those first turns are significantly more important. Taking down their own 1-drop saves you tons of health and can be a difference between winning and losing a game. This can’t do that.

Another thing is card it gives you. Shaman spells… aren’t exactly the best ones. In terms of power of the Battlecry, it’s about on the level of Swashburglar – it often gives you something useless/weak in your deck. The best example would be Ice Fishing in a deck with no Murlocs, but other cards like Primal Talismans, Bloodlust, Ancestral Healing, Totemic Might, Windfury, Cryostasis etc. can also be very situational or useless (remember that you’re most likely playing this in a slower deck without big board). Swashburglar, however, was played for two more reasons – it was a Pirate for the sake of synergies with Patches the Pirate/Southsea Captain AND it was a cheap Combo activator. This one doesn’t really get extra synergies – Beast has no synergy with Shaman and cheap minions don’t really do much. Well, there is a synergy with the new Shaman Hero, but later about that.

Overall, I can see this being played, but that’s mostly because Shaman doesn’t have many other early game options. Definitely not in a faster/more tempo-oriented deck, because it would prefer a better 1-drop like Fire Fly. But if Control Shaman will be a thing, this might be slotted into it from the lack of better options. Still, overall it’s rather average.