Our Kingsbane Mill Rogue guide for the Kobolds and Catacombs expansion features the best deck list for this archetype. This Rogue guide includes Mulligans, Gameplay Strategy, Card Substitutions, and Combos/Synergies!

Kingsbane Mill Rogue is a very interesting deck. On the one hand, it’s hard to call it a meta deck – it’s not very popular and is played mostly as a counter-pick. It’s biggest downside is that it doesn’t work too well against Aggro decks. However, it is amazing against all kinds of slow, Control builds like Control Warlock or Control Priest. That’s why some players still stick to it, and we had a few high Legend climbs from people utilizing similar lists – it just works very well if you learn how to play it and get the right matchups.

But most importantly, the deck is really fun to play. I guess that is the main reason why people run it on the ladder. Winning with this will feel much better than winning with some generic, Aggro deck or something similar. Milling a key combo piece, getting a 10+ Attack weapon with Lifesteal, those things are commonly happening with this deck, and that’s what makes it so cool. 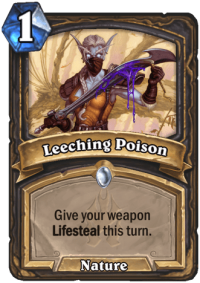 Just like every deck, Kingsbane Rogue wants one thing against Aggro – survive. The deck is generally bad in fast matchups, just because of how limited its defensive tools are. The best way to win Aggro matchups is obviously getting a Kingsbane, some Attack buffs and Leeching Poison. This way you let’s say have a 4/3 weapon with Lifesteal – not only you can clear the board with it, but you don’t take damage (or even heal) at the same time. However, the game doesn’t always go your way and you often don’t get either Kingsbane or buffs and you need to improvise.

Against Aggro, the most important thing to do is constantly clearing the board. In the early game, your Hero Power and Backstab should be good enough, but that’s definitely not enough for the mid/late game. That’s where other cards like Vanish come handy. While it’s not a board clear, it lets you reset the board state completely. Not only you usually buy an extra turn, but your opponent might not be able to replay everything back into the board. It also deals with all the buffs that might have been applied to the minions, like Blessing of Kings. 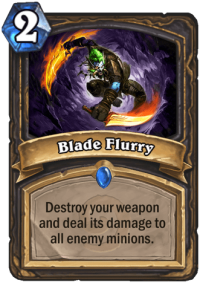 Aggro decks usually have more refill than you can handle with a “normal” hand. That’s why, when playing against Aggro, your goal is to survive and draw key cards. Stall the game for as long as you can. Try to not use Vanishes etc. until you really have to. You can also stall one more turn with Valeera the Hollow. After you draw your Kingsbane, equip it and start buffing it. If you survived until that point, the game should be over in your favor – a big weapon with Lifesteal should be enough to keep you alive, and you can even AoE clear the board with Blade Flurry if you need to (remember that it does not heal you, though).

Try to not use Coldlight Oracles against Aggro unless you really need to, because you’re in a desperate situation. Generally, giving them more cards is not a great idea, because they will just kill you faster.

And just a final tip at the end – Knife Jugglers are your worst enemies, try to kill them as soon as possible. If you leave them, a Vanish will not really be that effective, because your opponent will drop Juggler first and then a bunch of minions he got back, resulting in 4-5 extra damage. Also, remember that when you play Valeera the Hollow you aren’t immune – you’re just Stealthed. But you can still take damage from the Juggler. If you’re low, Paladin dropping 2x Juggler and some minions can actually kill you. So kill all the Jugglers as soon as you can, and never leave them on the board or Vanish them if you don’t have to.

Games vs Control are much easier than those against Aggro. In fact, you are a favorite in some of the matchups. Your basic strategy is a bit different here. Surviving is still a concern, because if you get into the super late game, you usually win. But surviving vs Control is a bit different than surviving vs Aggro. Generally, the early game should be much more quiet. They rarely drop multiple minions early, and the ones they do you can usually deal with. They really start dropping big stuff only around Turn 4-5, which gives you some time to draw and develop Kingsbane. 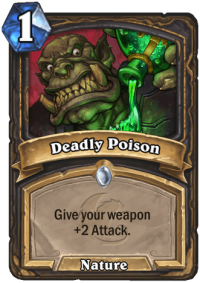 You want to make as big of a weapon as you can, as soon as you can. Having a big weapon you hit with every turn can be really threatening, and force them into playing defensively, which is exactly what you want to do. Leeching Poison is not that important vs slow decks, but it’s still useful, especially in the late game.

Milling is also an important part of your matchups vs Control. Those decks have nearly full hand quite often, which is the best time to drop Coldlight Oracle. Milling cards isn’t always great, but you will often end up milling a key card they need to win. For example, against Cube Warlock, getting rid of Bloodreaver Gul'dan is often game-winning. If you don’t feel like you’ve milled enough, you can return Oracle to your hand with Shadowstep. Playing Oracle -> Vanish also works. Be sure to not throw your final Oracle onto the board without a way to return it into your hand. If it dies, you will no longer be able to mill.

Sap and Vanish also play a big role in slow matchups. You don’t play them only to stall (but that’s also an important purpose) – you can use them as removal too. When your opponent’s hand is full and you return a minion to their hand, that minion has nowhere to go and it immediately dies. This often makes plays like Oracle + Vanish a full board clear on top of some mill. 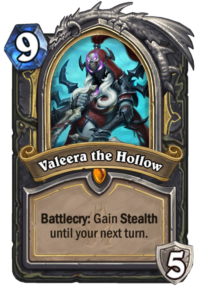 Valeera the Hollow is also an important card vs slow decks. It lets you do multiple things – double up the buffs (if you have Valeera in your hand already and you’re pretty close to playing it, consider waiting before using your buffs – especially Deadly Poison and Captain Greenskin, those combo really, really well with Valeera), get more mill, Sap two minions for the cost of one card etc. After playing Valeera, you need to start planning ahead – e.g. it’s not worth to use two different weapon buffs on a single turn. It’s better to use two copies of the first one (one regular + one from Valeera), and then next turn use two copies of the second one. With Valeera, you also need to remember that you get the Shadow Reflection at the start of every turn, before even drawing. Normally, you mill the card you draw with 10 cards in your hand – with Valeera, you only need 9 cards in your hand to mill something. So try to not keep your hand full or close to full.

Thanks to the Valeera, the deck can also never fatigue, since you can play your Kingsbane, attack, then replace it with a 1/3 copy you get from the extra card. This shuffled the big Kingsbane into the deck, which you equip next turn again and attack with it (shuffling the smaller one). Repeat it all the time and you will never take any fatigue damage (unless you play Coldlights). This is a great way to win the games after exhausting your opponent of all the big threats. Even if you’re ahead in fatigue, you should still win it.

You usually win through one of the two ways – big Kingsbane or fatigue. If you have a 10+ Attack weapon, you just attack your opponent with it and re-equip it whenever you can. Your opponent will have to heal himself, play Taunts (which you can Sap/Vanish) etc. in order to survive. Once you get to that point, they’re basically delaying the inevitable. The other way is fatigue – when your opponent is close to fatigue, or taking fatigue damage already, play a few Coldlight Oracles to put them much further into the fatigue. Even if it’s just his first point of fatigue, 2x Oracle deals A LOT of damage (1 + 2 + 3 + 4, and 5 on the draw at the start of his turn, resulting in 15 damage in total). Any further he is into the fatigue, 2x Oracle is usually an instant win. Just be sure that you are healthy enough or have enough cards left in your deck so you won’t die first.

Let’s start with the Epics:

And now onto the Legendaries: