Our Control Shaman deck list guide will go through the ins-and-outs of the potentially viable deck from the Kobolds and Catacombs Expansion! This guide will teach you how to mulligan, pilot, and substitute cards for this archetype! For now the deck guide is theorycraft, but as soon as the expansion goes live we will start updating it right away! 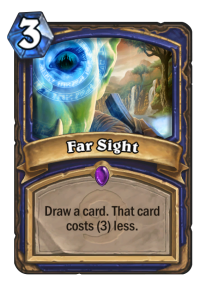 Control Shaman has been an extremely fringe deck for quite some time. It has not broken into the top tiers in recent memory, but it has had some minor support in the past. The most recent “meta” version of Control Shaman is probably Frodan’s BogChamp Shaman from Seatstory V over a year ago. The slow Shaman decks are some of my favorite archetypes in the game, and despite my best efforts, it has been difficult to get any traction on the ladder with them. With the release of Kobolds & Catacombs, I believe we may finally have enough support to give Shaman the boost it needs to play slower games.

One of the main reasons to run Control Shaman over more aggressive builds is the sheer power level of Far Sight and Volcano. These cards by themselves are draws into playing a slower strategy and finding ways to abuse them can have massive payoffs.

Far Sight has long been one of the most powerful cards Shaman has access to, but has had a tough time finding a home. Replacing itself and also cheapening your next card to allow you to potentially cheat on mana is a huge payoff. Far Sight works best in decks with expensive cards so you get the full value out of the reduced cost, and a Control Shaman deck with large minions and incredibly powerful spells is the perfect home for it.

This deck is designed to slow the game down in the early turns with cheap interaction and effective board clears like Devolve, Maelstrom Portal, Lightning Storm, Hex, and Volcano. The deck relies on using board clear tools effectively and following them up on subsequent turns with any of your large threats like Earth Elemental, White Eyes, Thing from Below, or Snowfury Giant.

The deck functions as a control deck in the early turns of the game, but quickly transitions to a beatdown plan after it has stuck one or more large threats. This is actually something that can give Control Shaman a leg up over some of the other control decks. While other control decks are drawing cards and playing small, value-based minions, Control Shaman is slamming giant minions with heavily-statted bodies and pressuring them down.

Control Shaman is able to adapt its play-style depending on what deck it is playing. Against aggressive strategies, it will want to clear the board early and close the game out by hiding behind an endless string of huge taunt minions. Against control and midrange decks, it wants to develop early card draw spells to generate value until it can stick a couple big threats backed up by Ancestral Spirit while pressuring the opponent’s health.

With a slower Shaman deck like this, you are looking for early interaction and card draw effects. Cards like Devolve, Maelstrom Portal, Mana Tide Totem, and Far Sight are great keeps.

You do not want to keep any of the expensive minions in your opening hand as you want to play them much later in the game as they will clog up your hand, when you would rather have the card draw spells and cheap removal/interaction.

As this is a generic list I have put together before the set has even come out, feel free to change up some cards in the list depending on what you encounter. I would not mess with the core of the deck (Large Minions, Far Sight, and Copy effects), but there is room for innovation and tech cards like Harrison Jones, Skulking Geist, Doomsayer, and the list goes on. Depending on what shows up as the best lists from Kobolds & Catacombs will determine what direction the deck should be taken in, so keep playing, keep testing, and happy brewing!