Our budget Pure Paladin deck list & guide for the Scholomance Academy expansion will teach you how to play this budget list. This guide includes Mulligans, Gameplay Strategy, Card Substitutions, and Combos/Synergies! 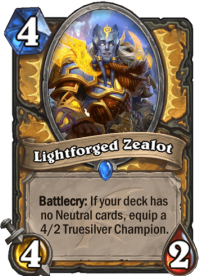 Scholomance Academy has been really kind to Paladin. The class wasn’t exactly on the bottom before that, but it was unimpressive to say the least. When released in Descent of Dragons, Pure Paladin was considered a meme – Paladin didn’t have enough good class cards to pull it off, it simply wasn’t worth it. Things haven’t changed that much in Ashes of Outland, however with all the nerfs to other classes combined with a couple of buffs to Paladin (Aldor Attendant and Libram of Justice), it was slowly gaining some traction. And now, finally it got enough strong class card to see competitive play. Not only that – it’s one of the best meta decks.

The selling point of Pure build is dropping any Neutral cards to be able to play two pay-off cards – Lightforged Zealot and Lightforged Crusader. Both of them are quite powerful, but sadly I could fit only one into this build because of the Epic limit. The budget version of this deck is quite alright, but it’s still missing a bunch of important pieces such as the Crusader I’ve already mentioned, Argent Braggart or High Abbess Alura. That’s why I thought about going for Murlocs, but I feel like even though it might be slightly better up front, Pure Paladin has a much better upgrade path.

Pure Paladin plays mostly like a standard Midrange deck. Your main goal is to play on the curve and try to adjust your strategy depending on the deck you face. 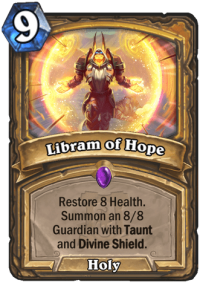 Against Aggro, you take on the control role. You want to play more defensive, clear everything they play, try to get efficient trades and keep your health high. The deck works quite well against Aggro because it has a solid early/mid game tempo, which means that you should more or less keep up with your opponent. Sadly, Consecration is the only AoE in your deck, but given that you will – in general – try to stay at least even on the board, you won’t need your AoEs that often. You also have a bunch of defensive cards – Aldor Peacekeeper can neutralize a high attack minion (e.g. it works really well against a big Edwin VanCleef or an early Flesh Giant), Aldor Truthseeker is a solid Taunt, but most importantly – Libram of Hope exist. The card is quite weak at its base 9 mana cost, but you will rarely be casting it for that much. If you play a single Attendant and a single Truthseeker, it’s already only 6 mana, and that’s often light’s out for an Aggro deck. A huge Taunt with Divine Shield with 8 healing on top of that often seals the game. 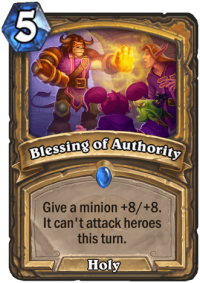 Against Control, however, you play a completely different play style. Since it’s a budget deck, you curve is quite low and you honestly can’t afford to go for a longer game. Without cards like Lady Liadrin or Lightforged Crusader, you don’t have that late game refill letting you go for a longer game. So your game plan is simple – kill the opponent as fast as you can. While your deck hasn’t got a lot of direct damage, it’s well equipped to play on curve and smack the opponent with minions. Curve is important – going for “slower” value plays like Hero Powering is not really feasible. For example, if it’s Turn 3 and your only play is Aldor Peacekeeper – just drop it as a 3/3, it’s better than 1/1 from HP. The perfect case scenario is a good curve into Blessing of Authority that your opponent can’t deal with. Giving a minion +8/+8, even if it can’t attack right away, is massive. Let’s say a small 1/3 minion turns into a 9/11 that can kill opponent in just a few swings. Try to not trade too much with your minions – Libram of Justice is a great tool at getting through Taunts or dealing with a bigger threat. Remember that Libram of Hope can heal up your minions – your health total is usually not that important, because if you’re at the point at which you die to a control deck, you’ve lost the game a long time ago. Your only sources of reach are Blessing of Kings (but you need a minion on the board), Consecration and Zealot – so use them wisely. Zealot in particular can push for quite a lot of damage thanks to the Truesilver, and weapon removal is still quite uncommon, so you should be able to swing twice.

And that’s pretty much the way you play the deck. Playing a non-budget version is a little bit more complex, because you have a bunch more interactions, but the budget version is really straightforward.

The deck is missing quite a lot of important cards, and adding them is going to increase your win rate quite heavily! Pure Paladin is one of the best decks right now, but it’s not exactly most budget-friendly. Assuming you have at least a couple of those cards, though, you can really turn it into a real threat.

As you can see, there’s a lot to upgrade in the deck, but even adding only 2-3 of those cards will already make the deck competitively viable.