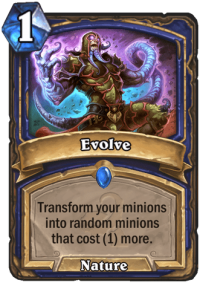 Evolve Shaman is a deck that rose up towards the end of the Un’Goro meta and quickly became one of the most powerful decks in Tournament and Ladder play alike. The deck relies on spreading wide on the board with efficient minions before closing the game with Bloodlust burst or a big Evolve swing turn. Fortunately, Evolve Shaman plays a slew of budget minions to accomplish this game plan, making it a prime candidate for a budget deck.

Of the two Legendary cards in the deck, Patches the Pirate is probably most critical due to his immediate impact with Flametongue Totem and synergy with the token game plan. Aya Blackpaw makes your board a little less fragile against AoE, but is a little more replaceable in the deck.

In Kobolds and Catacombs, Evolve Shaman gains very little outside of two Epic cards: Unstable Evolution and Corridor Creeper. While neither is included in this budget-friendly deck, both (the latter especially) would be very welcome additions.

Evolve Shaman relies heavily on having minions in play. As such, maintaining control of the board is absolutely necessary. Doing so in this budget version is a bit more challenging without access to Maelstrom Portal, but Devolve can act as a sort of pseudo-AoE clear.

Time of the decks titular spell is also critical. Comboing Evolve with high-value minions is not always optimal. With a favorable board position, an early Evolve following value trades can lock other aggressive decks out of the game. In slower matchups, however, it may be necessary to hold the Evolve to pair with Doppelgangster or Saronite Chain Gang to make for a potent board refill.

Always be aware of the amount of damage you have on board with Bloodlust to look for your opening for lethal. A simple calculation for your Bloodlust damage is Damage on Board + (3 x Number of Attacking Minions). Do remember that, because this deck runs two copies, you can use Bloodlust to clean up with trades rather than only using it to score a kill.

A card game veteran, Roffle has been infatuated with Hearthstone since closed beta. These days, he spends most of his time tinkering with decks on ladder or earning gold in Arena (f2p btw). In particular, Roffle has a wealth of experience in competitive Wild Hearthstone, including a top 16 finish in the inaugural Wild Open Tournament and numerous high end of season finishes since the format’s inception. Follow him on Twitter or check out some of his articles on Roffle.ne