Our Big Recruit Warrior guide for the Kobolds and Catacombs expansion features the best deck list for this archetype. This Warrior guide includes Mulligans, Gameplay Strategy, Card Substitutions, and Combos/Synergies! 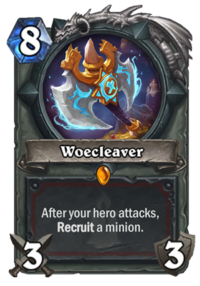 In a meta that is dominated by combo and tempo-orientated decks, the classic control Warrior has become less effective in the current meta due to superior alternatives that accomplishes its goals in a more effective way such as Highlander Priest, which is favored against Warrior’s worst matchups. In the previous expansion, with the addition of cards such as Blood Razor and Bonemare, we were introduced to a new variant of Tempo Warrior, but at best, it was a tier 2 deck, and was mostly seen as a fun and gimmicky deck rather than a viable pick for competitive ladder. However, in this expansion, Blizzard decided to explore different options for Warrior, giving it a new archetype that may have the potential to be considered a tier 1 deck, and may see competitive play in the future – Big Recruit Warrior.

It was only a matter of time Warrior was included in the same family as Priest and Druid. After all, if Resurrect Priest and “EZ Big EZ Druid” could play big minions, why should Warrior not be able to do the same? The best part is that the deck is entirely competitive, or at least, it seems that way currently. In fact, a Japanese Hearthstone player used this deck list to reach number 1 legend. You can also watch Brian Kibler pilot his own version of the deck here.

This deck revolves around the new mechanic that was recently added to the game – Recruit. Its purpose is to drop heavy hitters while still being cost-effective with cards such as Gather Your Party and Woecleaver. Similar to Priest and Druid, it has reactive spells and tools such as Blood Razor and Sleep with the Fishes to keep you alive in the early game, and to ensure that you’re able to reach its potential in the late game.

Shield Slam – A great single-targeted removal tool that works especially well with the new card, Unidentified Shield. It has great synergy with the classic Shield Block to help you relieve early tension on the board.

Whirlwind – An effective tool against any aggro deck especially Aggressive Paladin. When combined with Sleep with the Fishes, the results can be devastating for your opponent.

Forge of Souls – A great utility card that allows you to consistently draw your core weapons, Blood Razor and Woecleaver whether your facing aggro or control! Think of it as a better Arcane Intellect because you’re drawing versatile cards that will help you in any situation.

Slam – A 2-mana cycle card that allows you to active Execute or combo with Sleep with the Fishes.

Reckless Flurry – The long-awaited AOE card that Warrior deserved. Although, it depletes your armor upon use, it is still a decent flexible AOE. It works well with Shield Block and Unidentified Shield.

Blood Razor – This card does not need an introduction. The amount of whirlwind effects that can be gained from this card are vital in keeping the board clean!

Unidentified Shield – A new card that is cost-effective in almost any situation. Its text can take on any of the 4 possible effects on top of the armor gain: Summon a 5/5 Golem, Deal 5 damage, Equip a 5/2 Weapon, or Gain 10 additional armor – all of which are pretty good.

Gather Your Party – Think of this card as a superior Shadow Essence. Since your deck is only filled with good minions, you are probably going to get a heavy hitter or a cost-effective minion for only 6 mana. Imagine getting a Deathwing, Dragonlord with a hand full of dragons! Welcome to Value Town!

Scourgelord Garrosh – This might seem a odd pick for such a deck because it doesn’t fit in with its theme, but it’s a decent removal tool because of its capability of clearing massive boards with its “cleave” effect. It’s also important to note that you can minimize the damage intake you receive by attacking adjacent minions with lower attacks.

Grommash Hellscream – A Warrior deck is never complete without its leader! Grommash is a great reactive tool, but it also works well as a finisher. It can be activated with Slam, Whirlwind, and Scourgelord Garrosh‘s Hero Power.

Woecleaver – This card is the bread and butter of the deck! This is one of the better legendary weapons in the expansion, where you are able to recruit 3 heavy minions over the course of 3 turns! Imagine getting a Ysera or Y'Shaarj, Rage Unbound. That should sound convincing enough!

Sleepy Dragon – The 4/12 statline on its body makes it a great card against aggressive decks, especially if you’re able to recruit it! It also protects your more important cards from your opponent’s minions.

Ysera – This card is the definition of value. Not only is it a cost-efficient minion, especially if you’re able to recruit it from Gather Your Party or Woecleaver, but it generates additional resources that are also relevant to the board and your minions. Not to mention that the card itself and Emerald Drake are dragons, which have great synergy with Deathwing, Dragonlord!

Deathwing – It is rare that you find yourself in a position where you are forced to play this card. Most of the time, it is just a 12/12 minion that was recruited by one of the other cards, but it’s nice to have the option, especially since the majority of your cards are good topdecks!

Deathwing, Dragonlord – A must have card in a dragon-based deck. The amount of value that can be gained from this card alone is immeasurable. If you’re able to recruit this on turn 6, you probably will win that game. Even if your opponent manages to clear it with perhaps a Shadow Word: Death, more dragons will be summoned from your hand!

Y'Shaarj, Rage Unbound – The possibilities with this card are endless! If you’re able to recruit this from Gather Your Party on turn 6, and it subsequently pulled a Deathwing, Dragonlord, that’s good game right there.

In general, you don’t want to keep any minions in hand, mainly because you want to get them on board through the “recruit” mechanic.

Whirlwind, Blood Razor, and Sleep with the Fishes – When facing against aggressive decks, look for cards that can affect your opponent’s board, because your first priority is to clear the board. There’s no use in recruiting a heavy minion, if you’re already dead.

Slam, Forge of Souls – If you don’t have Blood Razor in hand, then Forge of Souls is a keep. If you already have a whirlwind effect in hand, Slam might also be a consideration to weaken 3-health minions, or to pop divine shields.

Forge of Souls, Gather Your Party, and Woecleaver – These cards will help you reach your mid-game spike, and allow you to drop big threats efficiently!

Shield Block and Shield Slam – If you’re against a class that plays huge-health minions during the mid-game such as Twilight Drake, it might be worth considering that to keep these cards to efficiently deal with it before it gets out of hand! However, your first priority is still to develop your own minions.

The general strategy behind the deck is rather simple and straightforward. In the early game, your playstyle is more reactive, where you try to clear the board as much as possible and stay alive. In the mid-late game, you become more proactive, where you begin to develop big threats that requires the attention of your opponent, otherwise the game would spin out of control in your favor. At this stage of the game, you try to apply as much pressure until you can finally beat down your opponent.

Against an aggressive deck such as Secret Mage and Aggro Paladin, you want to plan your turns carefully. By doing so, you’re able to maximize the utility of your reactive cards. Ask yourself, “What turn will I be able to play my big minions?” and plan accordingly. If the soonest turn you can play a big minion is on turn 6. Try to hold out on your Whirlwind and Sleep with the Fishes combo until turn 5.

Also, when the situation is dire, consider your outs. Don’t give up right away. Given the nature of the deck, it is natural for you to lose board control early on. This means you will often be playing from behind, where your constantly trying to regain board control. If you’re under extreme pressure, then it is probably better to use your Whirlwind and Sleep with the Fishes combo (even though it’s off curve) rather than playing Gather Your Party because there’s a possibility that your opponent may just slap you in the face if you don’t recruit a taunt!

Against a control deck, you want to be the aggressor, where you’re controlling the pace of the game. This means playing cards that would grant you massive tempo on board such as doing stuff, oh I don’t know… like recruiting a 12/12 body on board for only 6 mana (ahem, Gather Your Party). After you’ve gained control of the board, you want to ensure that you don’t overextend, so that your opponent won’t leave you hanging dry after they use a single AOE. It’s important to space out your threats – to strike a balance between commitment and board presence. You don’t want to commit too little that your opponent can afford to delay you a couple of turns, but you also don’t want to overextend too much where you would be punished too hard if he has the right cards.

The Lich King – The king commander of KFT that generates tremendous value when left unanswered! However, sometimes, you won’t have the time to play them because you have better options (which is not something you commonly hear!).

Geosculptor Yip – A great card that allows you generate value out of the amount of armor you have. I feel like this is mostly a gimmicky card that works extremely well sometimes. The reason why it’s is not an auto-include in the deck is because its effect is somewhat arbitrary, and it doesn’t really work until the later stages of the game where you have already accumulated lots of armor.

NeverLucky is a competitive Hearthstone addict who enjoys losing to RNG in local tournaments (he’s secretly a masochist). He has over 3000 ranked wins with Warrior. Oh, and he also likes turtles.