Our Tempo Mage deck list guide for the Scholomance Academy expansion features one of the top lists for this archetype. This Mage guide includes Mulligan Strategy, Gameplay Tips, Card Substitutions, and Combos/Synergies!

Tempo Mage is one of the classic Hearthstone archetypes, one which aims to leverage a unique combination of early minion pressure and spell-based synergies on its way to finishing the game off with burn spells. Sometimes it gets a tribal flavor, like in Goblins versus Gnomes, and at other times, it stretches its curve beyond what seems possible for this kind of a deck, like when Yogg-Saron, Hope's End was still around in Standard. Regardless of the build and the meta, the goal is always the same: get on the board, push some damage, draw the big spells, finish them off before they turn the tables on you. Though the early Scholomance Academy meta is fairly hostile to this approach, GMs and other strong players have posted decent results on the ladder with this kind of a deck, and it’s well-worth checking out if you’ve enjoyed playing with fast Mage decks in the past.

This is one of the best decks for Tempo Mage in Scholomance Academy, one which 2019 World Champion Hunterace piloted to top 25 Legend. The deck list might still get changed or refined – if it happens, we’ll update it here!

Find more versions of this deck type on our Tempo Mage archetype page! 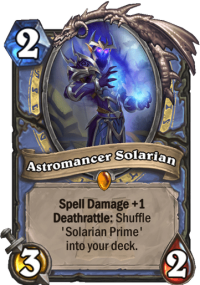 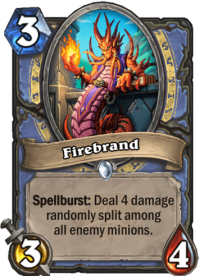 You will most likely have to assume the control role against most aggressive opponents, freezing and removing their minions before they could deal damage to you. Eventually, generated burn spells and cheapo Mana Giants will serve as your solution to close out the game. In the meantime, focus on staying alive. Ray of Frost is a key card here, both as a stall tool and as potential removal, and a well-executed Firebrand turn can immediately turn the tides in your favor. In the mirror match, their interaction is a bit like the deliocate dance between Glaivebound Adepts in the Demon Hunter mirrors: you want to make sure you’re the second one to pull the trigger.

With no healing tools and little to no taunt options (unless you run a single copy of Mirror Image like RDU and other GMs did), you will have to eventually generate such tools. Devolving Missiles can serve as a great response to heavily buffed creatures from Rogue or Paladin (just keep in mind that it isn’t affected by Spell Damage). The most important aspect of these matchups is to figure out a win condition as you go along – since you have no burn spells to draw into in these lists, you will eventually have to take control of the board. 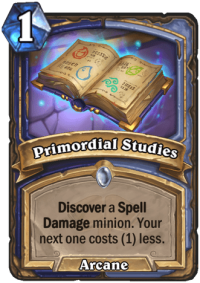 The fun thing about this deck is that it can definitely generate enough resources to go toe-to-toe with slower opponents even in the late game. Azure Explorers from Primordial Studies, potentially multiple copies of Solarian Prime, Mana Cyclone shenanigans, Potion of Illusion brouhaha moments, Evocation: the list is long. Your goal is to stay ahead on the board in the early turns and deal some chip damage, forcing out uncomfortable turns and small removals in the process. A hit or two from a Lab Partner and a Violet Spellwing can matter a lot in the end – and meanwhile, you can draw a lot of cards and stockpile cheap spells for eventual power turns with Sorcerer's Apprentice, Mana Cyclone and Chenvaala (not necessarily combining all three at the same time). It’s almost impossible to run dry with this deck: the real concern is that once you lose the board, it’s very difficult to get it back. As such, your main consideration should be to play in an aggro-control style with your limited minion pool – getting on the board early and using spells to remove any creatures your opponent may use to contest it – until you can generate a large enough hand to play a quasi-control style and have a fair fight. Better yet, you might find enough burn to close out the game immediately off the back of your early chip damage. Watch out for the clock: Druids will eventually do Druid things and Warriors will stuff your deck with so many bombs that you will explode alongside your overly slow gameplan. You need to know when you start pushing as much damage as possible. 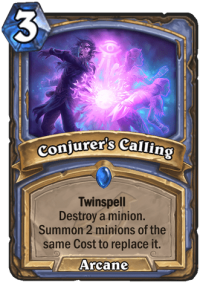 Tempo Mage offers a wide variety of possible build options in Scholomance Academy, with the main question being the inclusion of Conjurer's Calling. Realistically, Mana Giant and Jandice Barov are your only reasonable targets for the spell, and it’s quite expensive to hold in your hand for a deck which revolves so much around trickery with low-cost cards. Also consider the fact that you’ll have more than enough opportunities to generate it in the slower matchups where it comes into play, and you’ll see why Hunterace’s featured build cut the card for Chenvaala. That, incidentally, is also a replaceable option.

Cult Neophyte also isn’t a core inclusion, though it can do wonderful things against Rogues and Druids when timed right – though it did come at the cost of a second Primordial Studies. As highlighted above, a single copy of Mirror Image (again, here’s a link to the RDU/Casie/Bunnyhoppor approach from Grandmasters) can also shore up your anti-aggro plans and add extra consistency to the spell cycling shenanigans. You can also follow Feno’s lead and remove the one of the Violet Spellwings for a Conjurer’s Calling, and maybe even remove Firebrands for Brain Freezes for a similar effect on the board state, albeit without the body to help out your push. Though these are all minor adjustments, they all impact your strategy: a larger emphasis on spell (re)cycling and Mana Giant pushes will come at a cost of your tempo-based strategy. Choose carefully!