Our Boomsday Project Quest Rogue deck guide will help you learn how to better pilot this deck. Our guide features mulligan, play, and card replacement strategies!

Love it or hate it, Quest Rogue is a deck hardly anyone can feel lukewarm about. Introduced to the game with Journey to Un’Goro and The Caverns Below, Quest Rogue took Hearthstone by storm, bouncing minions back and forth to complete the quest and receive Crystal Core, which turned all of the Rogue’s minions into 5/5s (before the nerf), and enables the Rogue to finish off the opponent with a barrage of Charge minions or simply playing board after board of cheap minions. 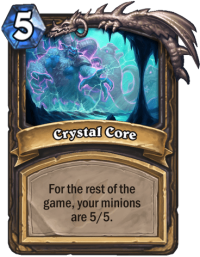 Its entry was so dominant that The Caverns Below was soon nerfed to require playing five minions with the same name instead of the original four. At first sight, this condition seems difficult to accomplish, and with played requirement instead of mere summoned requirement to boot – meaning that cards such as Saronite Chain Gang only count as one minion played. Indeed, Quest Rogue does not play cards that summon multiple minions, but relies on cards that bounce minions back to hand or create new playable copies of minions to complete the quest.

Despite being nerfed once, the deck became part of the meta again in The Witchwood, which lead to the second nerf of the Quest card – now instead of turning the minions into 5/5’s, you turn them into 4/4’s. Given that they can no longer clear 5 health minions (e.g. Spreading Plague), and are susceptible to 4 damage AoEs (e.g. Flamestrike), it looked like the deck will no longer be viable.

However, believe it or not, even though the card was already nerfed twice, it has made another comeback in Boomsday Project. Introduction of Giggling Inventor alongside the meta change made it viable again, especially in the higher ranks, where you face slow decks more often than Aggro (which is the deck’s weakness).

Giggling Inventor nerf was a massive hit to Quest Rogue’s potential. Not only the deck became more vulnerable to aggression (which was already its main weakness), but it lost a big, late game board flood against Control (playing 2x Inventor with Valeera the Hollow after Quest is finished). The deck is not completely dead; it still has good matchup vs slow decks, but it’s not more of a niche pick to counter the specific meta. 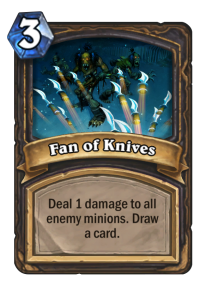 Quest Rogue decks largely consist of the same cards. The only tech card that is present in this list is Fan of Knives – to fill the gap left by Giggling Inventor and make your Aggro matchups (especially Odd Paladin matchup) at least a bit better.

Preparation works with all of your spells, enabling you to go for more tempo or possible lethal with plenty of Charge minions and Prepped Vanish.

The general bounce and copy package helps complete the quest and push for damage with Charge minions after the quest is completed: 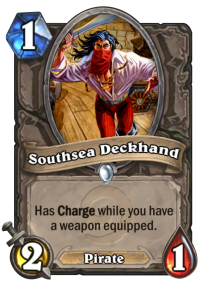 Then, there is the Charge minion package that is often used for lethal:

The defense and freeze package buys you time:

Quest Rogue is one of the most difficult decks to mulligan with – almost all cards are kept in some situations. Look for a way to complete your quest and survive. Think about how various cards work together, and keep good fits. 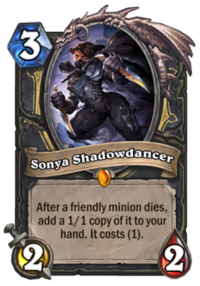 The key question is how to complete the quest, and there are several answers to it, which makes Quest Rogue a complex deck to pilot. In order to complete The Caverns Below, you need to play a minion with the same name five times. This is play, not summon, so only minions played directly from hand count (which is why Quest Rogue decks don’t include any summon effects). 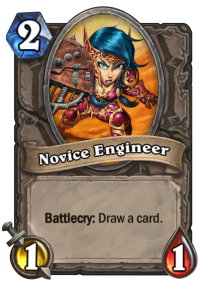 Let’s start with the most straightforward plan: Novice Engineer. The advantage of completing the quest with Novice Engineer is that it draws you more cards each time it is played, and thus provides you with new opportunities to draw more bounce effects, making it easier to complete the quest. A word of warning! Do not complete your quest by playing Novice Engineer when your hand is full! The card is drawn before the quest completes, thus burning Crystal Core. Yes, we’ve seen this happen even in top-level tournament play.

Another good card to bounce is Glacial Shard. In many matchups, if you can find Glacial Shard and some bounce effects, you can keep the opponent’s board frozen while you advance your quest.

Furthermore, sometimes you hit good bounce targets with Mimic Pod. Having two copies of the card already in hand to start with can make it easier to complete the quest with whatever minion you happened to pull.

A rare option is to use Youthful Brewmasters to bounce each other. This requires too much mana to do from scratch, but if you can throw in a Shadowstep somewhere along the line, it is yet another viable way.

Whichever way you go for, keep in mind how many more copies of the minion you need to play to complete the quest. Avoid leaving your final copy vulnerable on the board, because if you lose it, you need to start all over again with another minion.

It is best to complete the quest with cheap minions: Elven Minstrel, for example, is in the deck for card draw, not for quest completion. One-drops are the best, but Novice Engineers effect makes it a worthwhile target even despite its cost.

After you have completed the quest, the next question is how to kill your opponent.

There are two main strategies: either you create wide boards of 4/4 minions that enable you to push damage from board, or you win with Charge minions. 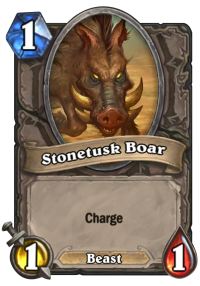 The most common strategy is to use your Charge minions, Southsea Deckhand and Stonetusk Boar, to push the necessary damage. If you have any leftover bounce effects, you can use them to add more damage, and you can also use Vanish to get rid of any Taunt minions and/or to return your Charge minions to your hand. For example, at 10 mana, you can play two Charge minions, hit face, Vanish them back to hand, and play them again to hit face again. If you have Preparation to go with that Vanish, you can play similar combos earlier or with more minions. Remember that you need to have your dagger equipped in order for Southsea Deckhand to have Charge!

One key observation about Vanish: It returns minions to hand in the order they were summoned. Any that do not fit in the hand are destroyed, triggering any Deathrattle effects. As an upside, you can burn Mountain Giants from a Warlock whose hand is very full, but as a downside, you may end up killing Voidlords and triggering their Deathrattle effects, and thus summoning Voidwalkers on the board that prevent your Charge minions from connecting to face.

You can also use Sonya Shadowdancer to good effect after completing the quest. If the opponent has any minions with five attack or more and you have a Charge or Rush minion available, you can simply attack that minion, get a copy from Sonya and attack the minion again – even the Sonya copies are 4/4 minions once your quest is done. It is possible to clear huge boards with this strategy as long as you get your minions to die to get the copies rolling. With Vicious Scalehide, it is also possible to heal a ton after completing the quest as long as the opponent has minions on the board: Vicious Scalehide has Rush, not Charge, so it cannot immediately hit face, but it can mow down minions.

Once you play Valeera the Hollow, you can pretty much go for infinite board thanks to a few cards. For example, dropping 2x Sonya Shadowdancer means that you get two copies of every minions that dies. But it gets even better – if your opponent decides to kill one of the Sonya’s, you will still get a 1 mana copy of it thanks to the other one! However, against some decks it’s worth it to play safe and bounce the second Sonya to have it in your hand whenever you need to copy some minions again. The amount of extra value and tempo Valeera gives you is a death sentence to most of the slow decks. They will be so busy having to answer your board all the time that they might not be able to push their own game plan. And if they do – you punish them by dealing lots of damage with an unanswered board. Late game in Quest Rogue vs slow decks is most often a win-win situation for you. 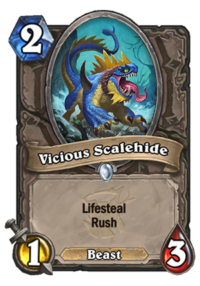 The general strategy of Quest Rogue detailed above remains the same in all matchups, but the details can vary.

Against aggressive decks, you need to survive. This often means throwing Wax Elementals on their path, and using some of your Charge minions to clear key parts of the board.

Healing with Vicious Scalehide is often crucial as well. Depending on the opponent, you may need to use the Scalehide early for healing and board control – and possibly try to bounce it to restore it to full health – or use it immediately after the quest is completed to rapidly restore your health.

Glacial Shard can also put in work. Using it to complete the quest can buy a lot of time with repeated freezes on the opponent or their minions, or both.

The general strategy detailed above still remains the same, but the emphasis against control decks is completely different than against aggro decks in the early game.

In short, you want to draw. Novice Engineer, Mimic Pod, and Elven Minstrel are you best friends as you assemble your hand to overcome the control deck’s defenses and typically destroy them with multiple Charge minions after completing the quest. Do not throw away your Charge minions against control decks, they are a key asset to push that damage once you’re all set and ready to go.

A meta Quest Rogue deck costs over 8,000 Dust. It is possible to cut the cost a bit for the budget version, but some Legendary and Epic cards are mandatory and have no replacements. Also, keep in mind that replacing some of the cards will definitely have a negative impact on your win rate, and Quest Rogue games are usually very close – delaying your Quest finish by one turn will often lose you the game.

As most of the deck comprises of common cards, that leaves only a couple of expensive cards that can be replaced: