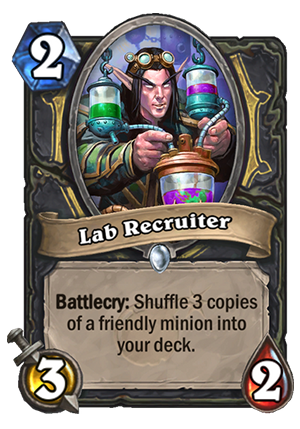 Lab Recruiter is a 2 Mana Cost Common Rogue Minion card from the The Boomsday Project set!

Battlecry: Shuffle 3 copies of a friendly minion into your deck.

Join the chemistry lab! We've got all the solutions.
Tweet

Gang Up on a stick? And not just any stick, on a 3/2 minion. For the same mana cost. Given that Gang Up was already a solid card in Mill strategy, at the first glance this just screams broken. However, we need to remember that Coldlight Oracle is no longer available in Standard, and it was the only reason why Gang Up was ever good, so a card like Lab Recruiter MIGHT exist and not break the game… or it might do it anyway. We’ve just got a Baleful Banker last expansion, but it appears that it wasn’t strong enough. Weaker stats, shuffles one instead of 3. It’s actually pretty funny that a card so much stronger than the Banker was printed right away.

In Standard, the best use of this card will be to shuffle more copies of your win condition back into your deck. What you want to shuffle probably depends on the deck itself. For example, in Miracle Rogue, you might want to shuffle three more Fal'dorei Striders or maybe even 3x Leeroy Jenkins – because why not.

In Burgle Rogue, it can be played on Tess Greymane – you can combo those two on Turn 10. Since Tess is the best card in your deck and basically your main win condition (other than the weapon), having 3 more copies in your deck definitely won’t hurt.

Another interesting use for this card is to simply go infinite. Play Lab Recruiter on your Lab Recruiter – shuffle 3 more into the deck, repeat. This is nowhere near on the level of Jade Idol, of course, but it might still come handy sometimes. You actually don’t even have to go infintie – just adding three strong minions into your deck will prevent fatigue for 3 extra turns and give you more fuel to finish the game (like after playing Myra's Unstable Element).

I disagree with a common voice that this is going to matter in Quest Rogue. I mean, sure, it MIGHT see play in Quest Rogue, but it’s not going to matter that much. Even if you shuffle 3 more copies of a card you’re bouncing into your deck, you might not even draw them by the time you finish the Quest. Remember that your goal is to get the Quest done by turn 6-8 depending on the matchup. Not to mention that it might be a bit clunky to play without Shadowstep – like, you can’t just play a minion you bounce + this on Turn 3-4, because then your opponent will kill that minion and you might not draw the extra copies in time, leaving you with nothing to bounce (you would have to switch to something else, most likely). Now, in the best case scenario, this can finish the Quest really quickly, but it will heavily depend on the luck, which is not really something Quest Rogue wants. It wants consistency.

It’s a really interesting card, and one with lots of potential. I’m 99% sure that it will see play in the Wild. When it comes to the Standard, however, it’s more difficult to rate. Right now there are no obvious, obnoxious combos you can pull off, but I’m sure that players will find something. This card has a massive potential and even if it won’t be played in The Boomsday Project, it most likely will a few expansions from now.