Our Highlander Priest deck list guide goes through the ins-and-outs of this Control Priest archetype that has become the go-to Priest deck in Scholomance Academy! This guide will teach you how to mulligan, pilot, and substitute cards for this archetype! 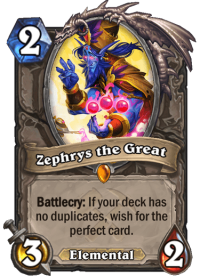 As long as Zephrys the Great and Dragonqueen Alexstrasza remain in the Standard format – until April 2021 – the option to build any deck as a Highlander variant is something you have to consider. Highlander decks typically increase in power as the card pool grows because then you will have more options for doing things and if you have two competing alternatives, a Highlander deck will simply run both as single copies, accept that one is slightly inferior, and more than make up the difference with the power of Zephrys the Great and Dragonqueen Alexstrasza.

Scholomance Academy gave Priest a plethora of powerful new cards and propelled Highlander Priest to become a true alternative to decks that run duplicates. Scholomance Academy Highlander Priest remains a Galakrond Control Priest at heart, focusing on the power of removal and thievery and finally the Hero Power of Galakrond, the Unspeakable to generate infinite threats that put the value that any other control deck can generate to shame. 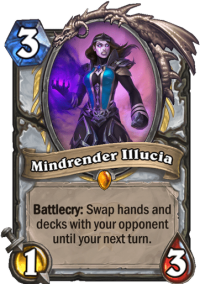 With the addition of Mindrender Illucia, Priest also has the most powerful anti-combo tool in the game, turning previously unwinnable matchups into a race of whether the combo deck can kill Priest before Priest draws Illucia and destroys the combo pieces.

All of this makes Priest an extremely powerful class: it is nigh undefeatable in the late game and any board you can build against them can be destroyed or stolen at any time. Priest’s main weakness is the lack of card draw, and it is possible to defeat Priest through tempo by overwhelming them before they find enough defensive tools. Decks that keep presenting new threats at a fast pace are poison to Priest as even though Priest has all the removal they ever need in the deck, they can run out of removal in hand unless they get a spectacular draw. As a Priest player, you need to evaluate which tools to use and when so that you avoid running out of slowly replenished answers.

Highlander decks have a lot of variation between them because they consist of singleton cards. This sample list has had success on the ladder, but it is by no means the only way to build the deck.

Check out alternative versions of this deck on our Highlander Priest archetype page! 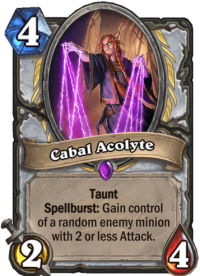 Highlander Priest is a control deck. Your primary goal is to survive and outvalue the opponent. Thanks to the Hero Power of Galakrond, the Unspeakable that generates random Priest minions for you, you have more value than any other deck in the game.

This does not mean that you always have to passively sit and wait forever, although there is not exactly a whole lot you can do in the first turns of a game. In fact, there are several ways for you to swing the game in your favor and become aggressive, depending on the exact list that you play with:

As you can see, just about all of your power plays depend on your opponent doing something first, which then allows you to copy or steal minions while destroying the originals. It is difficult to pressure a passive opponent as Highlander Priest, but you can turn the tables on an active opponent and get aggressive after taking care of their board.

If you are able to build a board, you can get some surprising burst turns with Kronx Dragonhoof buffing all your minions by +2/+2 (only when you are in Galakrond form) or with Zephrys the Great providing Bloodlust or Savage Roar. 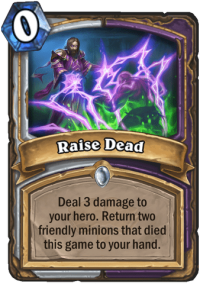 Raise Dead is an interesting value card for Highlander Priest because if you have it in your hand early in the game, you are able to set up guaranteed generated minions: for example, with Raise Dead in hand, you can play an early Zephrys the Great because you are guaranteed to get a new copy if you play Raise Dead after Zephrys and only one other minion have died on your side of the board.

Apotheosis has many uses in the deck, depending on what minions you have chosen to include. It works well with Rush minions such as Imprisoned Vilefiend and Ruststeed Raider, as well as with minions that deal area-of-effect damage and thereby heal you for all of that damage, such as Wild Pyromancer and Wretched Tutor.

Sethekk Veilweaver can be a major value engine when used with cheap targetable spells. Try to combine it with cards such as Penance and Shadow Word: Death, and potentially also with Renew to get a discovered spell and a random spell if you cast Renew on a minion.

Mindrender Illucia is a challenging new card to use. Her main use is to obliterate combo decks by playing her in the late game to spend some of the combo pieces and thereby deny the combo deck’s win condition. However, there is a lot more to her than that. Remember that you also give your hand to your opponent for a turn, so avoid giving away a hand that will lose the game, such as a hand with your Galakrond in it. Conversely, you will almost certainly win a mirror match if you can Illucia your opponent’s Galakrond and leave them without a more powerful Hero. Against aggressive decks, playing Illucia on turn two can help you scout what they have – and waste their Coin if it is still left – while lending the opponent a hand that most likely includes no playable cards because you do not have many inexpensive cards in the deck. 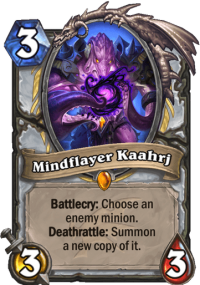 Against aggro decks, your only goal is survival. If you survive long enough, you win. Do not attempt to maximize the value of all of your plays but instead prevent the opponent from gaining too much tempo. Some examples:

The key thing you need to learn from experience is how greedy you can be. Sometimes you want the opponent to play more into your removal, but much of the time you need to clear minions before things get too scary.

Against control decks, you need to know how your answers line up against the opponent’s threats. You have some great stealing and copying cards, and finding the right targets for each gives you a bigger and bigger advantage until your opponent cannot keep up anymore.

You can win slow games in three different ways:

Keep an eye on any of these opportunities and try to direct the game to one of these outcomes.

Highlander decks are notoriously expensive and Highlander Priest is no exception. While some of the cards can be replaced, you will need many expensive cards to play a deck like this. Zephrys the Great and Dragonqueen Alexstrasza are the reasons to play a Highlander deck in the first place. Without them, you are better off with a deck that runs duplicates.

Here is a list of some cheaper cards that sometimes make the cut and sometimes are left out. They can be used to fill in for some of the more expensive cards.