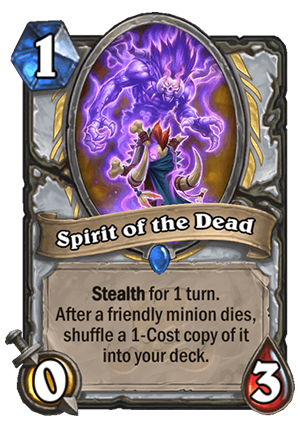 Spirit of the Dead is a 1 Mana Cost Rare Priest Minion card from the Rastakhan's Rumble set!

Stealth for 1 turn. After a friendly minion dies, shuffle a 1-Cost copy of it into your deck.

Spirit of the Dead Card Review

I really like this card, especially flavor-wise. The “Shadow Priest” theme they’re pushing this expansion is very cool. The “obvious” synergy they’re pushing is the one with Bwonsamdi, the Dead, but that’s definitely not the only way you could use this card in.

First and foremost – it’s a 1 mana 0/3 with Stealth. That alone can make it usable in… Combo Priest. Since minions in Stealth are generally hard to kill, and Combo Priest is often about sticking a minion on the board, this can be used to do it. Power Word: Shield + 2x Divine Spirit + Inner Fire creates a 20/20. Of course, it’s not the best combo target, you’d rather do it on an 8 health Twilight Drake for example, but it can be a nice backup plan if you can’t stick a minion and you’re holding your combo pieces. You can already sort of have a backup plan like that with Stormwind Knight, but the problem is that you need to do it all on the same turn – to get to the same 20 damage, you need 9 mana (2x Divine Spirit + Inner Fire), while Spirit of the Dead can be dropped on T5 and you can combo on T6, that’s a significant difference.

Another use is, probably the one that would fit the Bwonsamdi strategy most, is a kind of Midrange Priest build. You want to have a solid board, play this, do some trading, shuffle a bunch of high tempo minions into your deck, and either draw them or play Bwonsamdi to get all of them at the same time. The problem with this kind of strategy, though, is that a) Midrange Priest is not really a thing and b) that once you run out of steam, it doesn’t matter whether you topdeck a 1 mana copy of a minion or a 5 mana copy, they do the same, since you can still play it + Hero Power and do nothing else. But it would make Bwonsamdi a huge refill, which might be what this kind of deck needs.

Another option is a Deathrattle Priest with Reckless Experimenter, a card that was pretty hyped, but turned out to see play only in Mecha'thun build. This card has really nice combo with Reckless Experimenter, since you’re following him with a bunch of Deathrattle cards that will die, and then you get 1 mana copies of them back into your deck. And if your opponent doesn’t AoE, you can get 1 mana copy of Experimenter too (or maybe something like Carnivorous Cube etc.) which is definitely a fine discounted minion to get.

And of course, it can fit into something like the Resurrect Priest build Asmodai has popularized. The deck runs a lot of big minions, the kind of which you would want to shuffle into your deck as 1 mana cost versions. Imagine if your topdecks would be full of 1 mana The Lich Kings, Obsidian Statues and – of course – Prophet Velens. Now, the problem here is that this totem doesn’t let you actually get there – it just improves your late game. The deck runs Shadow Essence and getting the totem would be pretty bad, also getting one from Zerek's Cloning Gallery is a 50/50 situation. It’s amazing if your opponent has to clear the minions individually, but it’s bad if he just AoE’s, as it does nothing.

It feels like this card has potential, but it might be hard to use. The main problem I see with this card is that Priest decks aren’t generally minion heavy, nor do they do a lot of trading where your own minions are dying. Most of the time, the class has between 0 and 2 minions on the board, and if Priests do any trades, most of the times they try to value trade and not just run their minions to die. This card would be best in slower matchups, but a slow deck often doesn’t play any minions, so you can’t even run your own minions in to kill them. It has no immediate value, it’s not really useful in faster matchups (because the game will most likely be over before you draw your 1 mana copies of big minions), it’s hard to set up on bigger minions etc. So as you can see, despite it being a well-rounded card that might fit into many different decks, it might actually be pretty clunky to use. So that’s why I’m cautiously optimistic about it – not saying that it won’t see play, but I don’t see it as a meta-breaker yet. It needs more synergy, and more ways to get consistent value out of it, in order to be a great card.