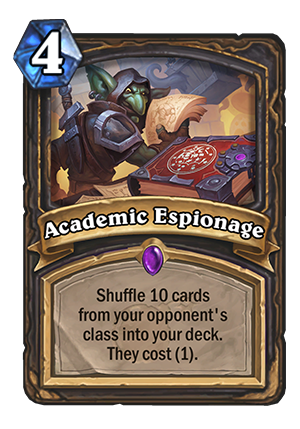 Academic Espionage is a 4 Mana Cost Epic Rogue Spell card from the The Boomsday Project set!

Shuffle 10 cards from your opponent's class into your deck. They cost (1).

Another insane card from this expansion. On the one hand, shuffling a bunch of random cards into your deck was never a good thing. On the other hand, those cards now cost 1 mana each. Exactly, 1 mana. So, on average, a huge discount will be applied.

On the one hand, I already want to play around with it. On the other, from the competitive side, I absolutely dislike this card, because there is A LOT of RNG involved. Such RNG cards are fun if they’re bad, but this one might not be. While I know that it’s somewhat of the best case scenario, imagine losing a game as a Druid to a Rogue drawing a 1 mana Ultimate Infestation from this, into a bunch of other 1 mana stuff from your class? It would feel horrible.

This card will obviously be an auto-include in Burgle/Pick Pocket/Tess Greymane Rogue, since it specifically synergizes with cards from other classes. It will make it much easier to keep the weapon (Spectral Cutlass) alive, and Tess is going to be huge once you drop her. Will it be good enough to put the deck into the meta? Hard to say, but it might be.

Basically, the only downside of this card is spending 4 mana for no immediate effect (well, you can always Preparation it, but that’s still 2 cards for no immediate effect). That said, with 10 cards shuffled, you should be able to “take” that mana back quite quickly, often after the first card you draw. And of course, you can still end up getting a bunch of bad cards that cost 0-2 mana anyway and the discount will be wasted. But the pool of bad cards is considerably smaller when everything costs 1 anyway. Like, normally you wouldn’t be happy with getting something like Cruel Dinomancer. 6 mana 5/5 is bad. But a 1 mana 5/5 is suddenly pretty damn good.

Another cool synergy is the one with Myra's Unstable Element. Not only you can get a full hand, but if you play this afterwards, you still end up with a bunch of cards in your deck. And each one of them is discounted. I could see Miracle Rogue with the Legendary Spell running a single copy of this card just to make that combo work. But even without Myra, remember that Rogues have some nice way to cycle or draw cards. Like, playing this during Gadgetzan Auctioneer turn. Or playing Prep + Sprint after. Or even dropping an Elven Minstrel and hoping to draw some good 1 mana minion (doesn’t have to be great, some random 4/4 is still great tempo-wise). And after you overcome the initial tempo loss of this card, it will just start getting value.

I honestly think that this card is broken, and not necessarily in terms of power (because yeah, it still does nothing immediately) – but I still think it’s pretty damn strong. I feel like it might get nerfed in a way Yogg-Saron, Hope's End was – even if it wasn’t completely broken on the ladder, it just ruined the competitive play. 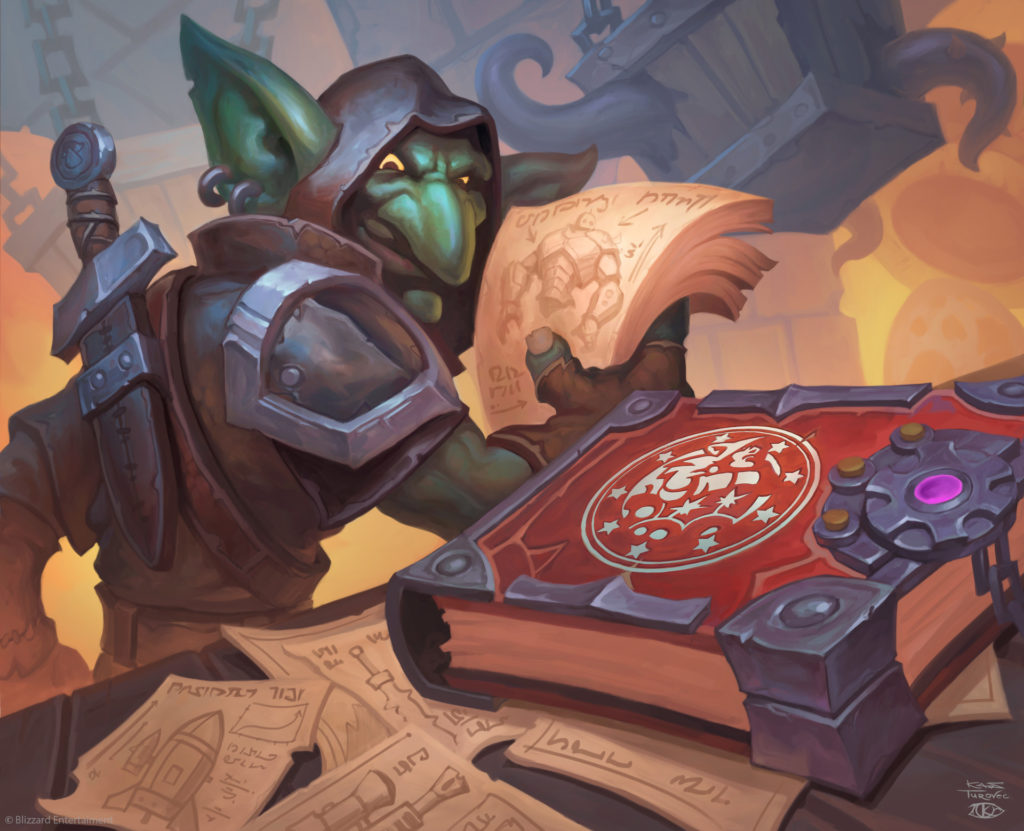