Behold, it’s the fastest nerf patch in Hearthstone history: four cards from Galakrond Shaman are slated to be nerfed (three class cards and one neutral), but will that be enough to shake up the metagame? And why did the deck end up being so incredibly strong after the launch? We’ve got a few ideas about both. 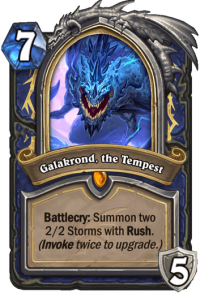 Before we examine the effects of the specific nerfs, it’s worth examining in detail why Galakrond Shaman had such a stranglehold in a meta and what made it so unfun to play against. Starting with Uldum’s Quest Shaman, the class’ most effective archetypes excelled at resource generation in recent metagames, easily grinding out decks like Control Warrior which mostly aimed to remove threats without aggressively contesting the board.

In theory, there’s a straightforward way to counter decks like this which fenagle their way into advantageous late-game situations: by applying early pressure and finishing them off as quickly as possible. As it turns out, Shaman’s existing toolkit was way too effective against what would have been their natural remedy in the metagame. The Quest versions had overly powerful ways to combat wide board states by doubling the Battlecry of Sandstorm Elemental or Mind Control Tech, and it remains to be seen how problematic that archetype may end up as should it resurface in the metagame after the nerfs at some point.

In the case of Galakrond Shaman, it’s the plethora of overtuned Rush minions which made things even worse, essentially guaranteeing the deck the ability to push anyone off the board: the Mogu Fleshshaper+Mutate combo was always a potential game-ender, but the fact that Shaman’s Invoke effect immediately affects the board with Rush minions coupled with the powerhouse that is Faceless Corruptor essentially removed the opponents’ ability to count on repetitive minion damage against the archetype. Then the walls of 5/6 Taunts come up via Dragon's Pack – sometimes right on curve. 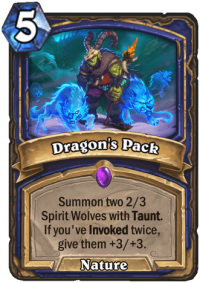 Rush as a mechanic has essentially replaced Charge in the game over time, and it is intended to promote the sort of minion-on-minion combat for board control which the developers always preferred in the game. However, the stat penalties for Rush kept going down over time, culminating in the current extreme situation where Galakrond Shaman could afford to run six card draw cards (Novice Engineer, Far Sight and Mana Tide Totem) despite not being a dedicated combo deck.

As Sottle excellently put it in a recent tweet, “Ironically, the result of rush going too far is that the decks that can successfully compete with every minion in an opponent’s deck being a high quality rush minion are non-interactive combo and play from hand style decks that don’t have minions for them to rush into”. This is what happens when the stat penalties for such a powerful effect go down: we went from Swift Messenger and Muck Hunter to Dragonmaw Poacher and Faceless Corruptor in the space of six expansions, with predictable consequences on the power levels of the game. So many neutral removal options will inevitably neuter tempo-based strategies, allowing for this kind of greedy constructs to rise.

As a side note, decks which completely ignore the board can also serve as a counter tool to this kind of a deck, and it’s no surprise that Holy Wrath Paladin was the other emerging alternative against its oppression. However, we’ve seen in the past that Shaman can easily tech in further healing options with Lifedrinker along others, and the current form of the deck was capable of applying enough pressure to have a good game even against this kind of a stalling strategy.

It’s also worth mentioning that powerful midrange-y Shaman decks always produced degenerate metagames in the past: Karazhan’s iteration was also a problem deck, and it was a very similar archetype which ruined the Doom in the Tomb event meta. (One has to wonder whether the devs would have opted for such quick changes if it wasn’t the exact same class with a very similar archetype wreaking havoc on the ladder.)

All in all, Galakrond Shaman had to be downgraded as soon as possible due to the reasons discussed above, and Team 5 took the unprecedented step to make near-immediate nerfs after the expansion’s launch. How much damage this ultimately did to the hype and their bottom line remains to be seen – from the perspective of content creators like us, we basically had to put all the usual articles and guides on hold entirely, and the permeating feeling in the community was – with good reason – that the first two weeks of Constructed play in the expansion was pretty much a waste of time.

And the Heavens Cry

So, on to the nerfs then. Based on everything we’ve discussed above, it’s no surprise the developers mostly targeted the deck’s ability to impact the board, with a few other important adjustments thrown in along the way. 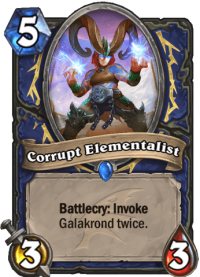 This nerf greatly slows down the deck in more ways than one. It takes more time to generate the two 2/1 Rush minions to impact the board state, has an adverse effect on Dragon's Pack shenanigans and makes it longer to “upgrade” Galakrond. Like the other adjustments below, it’s not meant to be a card-killer (and even has a minor benefit with Mutate): rather, it’s the cumulative effect which is intended to bring the archetype to heel, allowing other decks to shine.

Sludge Slurper: Now has 1 Attack (down from 2).

This is a big one and makes a lot of sense. We all knew Sludge Slurper would be a premium Shaman card from the moment it was revealed, and it made its way into every single archetype of the class. It does everything: synergizes with Overload, triggers multiple Battlecry effects, happens to be a Murloc and can often immediately impact the board if you get the right Lackey. The card will still fulfill all these roles going forward but won’t be able to contest the board as effectively (which is especially important on the first two turns), making this a fairly efficient change.

Faceless Corruptor: Now has 4 Attack (down from 5).

Going from 4 Attack to 5 is a very important break point for this kind of a card – just ask Darius Crowley. Having to double-trade into a single minion more often is a pretty big downgrade, but the card is likely going to stick around in faster decks because of its incredible ability to make use of any kind of token left behind on your side of the board. It’s not a card-destroying nerf (which is nice to see), and will have its impact on Galakrond Shaman as a cumulative effect.

With this change, the Mogu+Mutate combo went from trivial to challenging, both by requiring a wider board on the opponent’s part to pull it off and limiting the Shaman player’s remaining options alongside it due to the cost increase. It’s quite possible that certain lists will omit this combo going forward for more Quest value or a different kind of board impact, especially with all the neutral Rush tools still available.

We’re looking forward to the shift in the metagame once the balance update goes live. Maybe then, the Descent of Dragons experience can begin in earnest.