Hearthstone’s second expansion for 2021, United in Stormwind, was announced yesterday. As always, the trailer was impeccable and the developers were giddy with excitement. The new mechanic was revealed and we got to see some powerful new cards. But what can we really expect from the new expansion? Let’s take a deeper, more analytical look at what was just revealed and how they mesh with the current card pool.

New mechanics in Hearthstone range from almost inconsequential (Inspire) to game-defining (Discover). At first glance, Tradeable looks like one of the stronger mechanics introduced into the game over the past years. When you have a Tradeable card in your hand, you can drag it into your deck and pay one mana to draw a new card.

Celestalon described the new mechanic in full detail on Twitter: 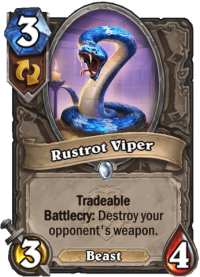 Aggro decks are unlikely to use Tradeable a lot: while it is possible to create Tradeable cards that would be interesting for them, aggro decks already exhibit a high level of consistency and generally want to use all of their mana every turn. Combo decks, on the other hand, generally want to draw quickly anyway to assemble their combo, so shuffling things back into the deck is less useful for them than it is for control decks.

Tradeable looks like a great approach to slowing the game down a little: it increases the consistency of midrange and control decks, and in a card game, consistency is everything. Given the general design of Hearthstone, I expect midrange decks to be the ones who benefit the most: they will be able to find defensive tools against aggro better than before and at the same time, keep up the pressure against control decks. 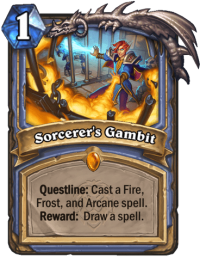 Fully completing Sorcerer's Gambit requires casting three sets of Fire, Frost, and Arcane spells, so that’s nine spells that need to be cast in groups of three.  The reward is powerful: Arcanist Dawngrasp that gives you +3 Spell Damage for the rest of the game. This type of permanent reward that cannot be interacted with by the opponent is really scary.

The Demon Seed is possibly even scarier. To get through it all, you need to take 21 damage on your own turns (six, then seven, and then eight), but as a reward you get Blightborn Tamsin that converts any damage your hero takes on your own turn into damage to your opponent’s hero instead for the rest of the game. You can play all the Warlock’s self-damage cards with impunity, if you find a weapon you can face-tank anything and laugh about it, and you are also permanently immune to fatigue damage on your own turn! A mill deck can still force you to draw cards on the opponent’s turn to deal damage, but you can breeze through your deck in a slow matchup and have all of your fatigue damage hurt the opponent instead. This creates the potential for some really weird mill decks where you deplete your own deck and deal fatigue damage to the opponent by forcing draws from your own empty deck.

So, Questlines, at least the ones revealed so far, are really, really slow. However, the payoff is huge. If you were to play a regular control deck, how can you challenge a Warlock whose fatigue damage hurts you instead? How can you survive the direct damage spells from a Mage who has permanent +3 Spell Damage?

If Questlines are viable, and that is a big if considering how slow they are, they will form the key win conditions for the next generation of Hearthstone control decks. This will not be a meta of removal-only control decks – well, it has not been like that for a while now – but of control decks that come with immensely powerful albeit slow win conditions. 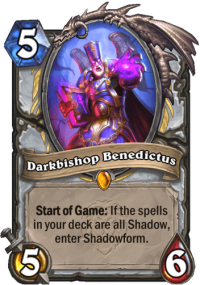 Priest is getting a class-defining Legendary card. It’s no Shadowreaper Anduin, but Darkbishop Benedictus has the potential to give Priest a new win condition. If you have Benedictus in your deck and all of your spells are Shadow spells, your Hero Power deals damage instead of healing. It’s essentially the Odd Mage Hero Power! This opens up new opportunities for Priest decks, including Aggro and Tempo Priest!

The spell pool might be a problem though: Power Word: Feast, Apotheosis, and Rally! are not Shadow spells even though they would fit a tempo archetype well. On the other hand, Thrive in the Shadows, Palm Reading, Raise Dead, Psyche Split, and Soul Mirror are Shadow spells and eligible to be used in a Darkbishop Benedictus deck.

Shadow Priest would still need some killer spells to become a thing, and I’m uncertain whether Blizzard will give it enough tools to succeed. I examined Priest’s class identity recently, and replacing the random-generation Priest with something else is not a simple task. With its near-endless value, it might even give Questline decks a run for their money, or, scarier yet, the current Priest decks might be able to include Priest’s Questline in them – it has not been revealed yet, so we can only shudder in terror while we wait. 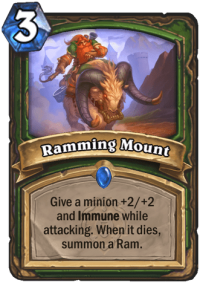 The revealed cards provide midrange support beyond Tradeable: the new mount spells are buff cards that give their target a Deathrattle to summon a mount with stats equal to the buff. Two of them were revealed yesterday, Elekk Mount and Ramming Mount. The ideal archetype for these spells is midrange: you make your minions more powerful and able to take favorable trades or push more damage while protecting your board with a summoning Deathrattle effect so that even if your minion is killed, you will still have another one there. Control decks will have a hard time driving midrange decks off the board.

I also had a chance to play with the new Legendary card that was given to everyone for free, Flightmaster Dungar, and it is yet another tool that goes nicely in control decks, but truly shines in midrange decks. While control decks are happy to get the healing effect, midrange decks can make use of all three options: a 2/2 adventurer, healing, or direct damage. Dungar is too slow for aggro decks but perfectly fine for midrange.

Will the Meta Really Slow Down?

While there are several things to get excited about in United in Stormwind, it is useful to remember how past expansions have been marketed:

Historically, the expansion features that have been advertised the most in the initial reveal have not often turned out to be meta-defining.

I don’t expect control decks to rise this time either, but I am somewhat optimistic about Tradeable because any mechanic that increases consistency can be powerful in a card game.

So far, it seems to me that we’re looking at some sweet new midrange decks, maybe a Questline control deck or two, and slightly weaker aggro decks (Doomhammer, meet Rustrot Viper). As for combo decks, there’s Runed Mithril Rod and Mailbox Dancer ready to help with the mana needed, but the actual combo pieces are still missing.

If midrange is your thing, United in Stormwind is looking fascinating so far!