March of the Lich King reveal season is currently underway, and Blizzard gave HSTD an opportunity to talk about some new cards by sending them early. I’ve already covered Priest reveals, and it’s time for Hunter. While admittedly the Hunter package is not as exciting as Priest one (mostly because it’s quite small), I think there still might be something to it.

Hunter is one of Hearthstone’s weapon classes. While it never had as powerful weapon synergies as Warrior, most of the Hunter decks run some weapon cards – for their effect, to help with board control, or simply to deal more face damage. But the class is finally getting some weapon synergies – and quite strong ones. Not only that, March of the Lich King also pays homage to one of the most iconic Hunter cards in history – Deathstalker Rexxar. Zombeasts are back in Standard (well, technically they already are back, but Death Knight Heroes will be gone after the event) – and I think that in an even more powerful form. 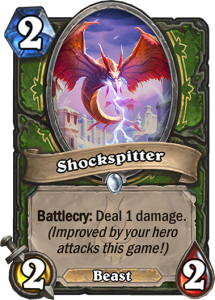 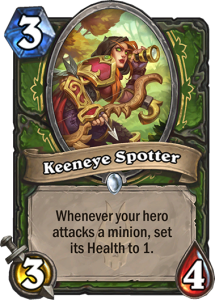 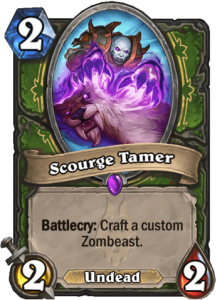 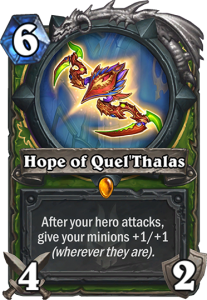 So here’s a Weapon Hunter deck I theorycrafted. Keep in mind that it’s a rather small, new package – we still have a bunch of Hunter reveals and some of them might fit into this deck, but for obvious reasons I can’t take them into account. 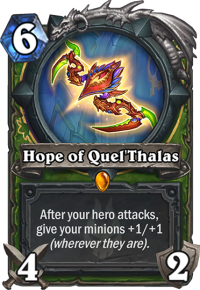 Hope of Quel'Thalas is definitely a standout card here. While it starts a bit slowly – after all, paying 6 mana for a 4/2 weapon is not perfect – it really adds A LOT of power to your deck. And hand. And board. That’s right, buffing minions wherever they are is quite powerful – you get the immediate boost of better board, and then every minion you drop becomes much more powerful. Sadly it doesn’t work on tokens (unless they are on the board at the time you attack), so Wildseeds won’t benefit from it that much, but it still improves other cards in your deck quite significantly. I think that Hope is a card that could slot into other Hunter decks too. While it’s a weapon so it obviously fits into a weapon-focused deck, the card’s effect is so good that I wonder whether it will be slotted into the Beast Hunter shell we all know.

Then we have Keeneye Spotter. This one kind of gives your weapons Poisonous – setting minion’s health to 1 means that you swing will always kill it (not counting things like Divine Shield – but it’s even better than Poisonous vs Shields, because it will still get them down to 1 on top of breaking the Shield). The card has very strong synergy with Candleshot – it’s a perfect combo to take down big minions. Not only you kill it with one swing, but since you’re immune, you take no damage doing it. It’s not as good with other weapons, but it might still help you take down a big minion here and there – and in the worst case scenario, it’s a 3 mana 3/4 so just dropping it on curve won’t feel horrible. 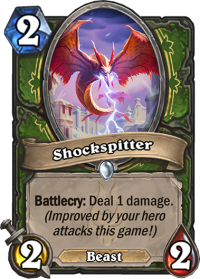 Another new card is Shockspitter and it’s probably the main reason to run this weapon package in the first place. The card starts pretty poorly – 2 mana 2/2 dealing 1 damage is definitely not something you would deliberately put into your deck. But after a single full Candleshot, it already deals 4 damage, which is now much more exciting. Even though it’s a 2-drop, it’s not really a card you want in your opening hand – it will grow stronger and stronger in your deck, and hopefully appear when you most need it. I can really see it getting up to around 5-7 damage, maybe even more in longer games. And that’s great. This card is also the reason I decided to run Brann Bronzebeard. At 2 mana, it’s easy to combo, and it might actually serve as a nice finisher vs slow decks. On Turn 7, you can drop Brann + 2x Shockspitter. And with let’s say 6 damage per Shockspitter, that’s 24 in total you’re dealing. Not that shabby. And if you don’t find your Spitters, you can always use Brann + School Teacher combo, which was proven to be great, time and time again. Also, if you feel like going for an even more combo-oriented route, you can try building a deck around Shockspitter, running Dire Frenzy + Warsong Wrangler combo. I’m nearly certain that it will be too slow, but it should still be quite fun. 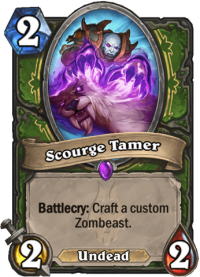 And finally – Scourge Tamer. It’s not a part of the weapon package, but since it’s also getting revealed today, I felt like adding it. And I think that it might actually not be a bad thing. The deck lacks 2-drops, and if the match goes on for too long, it might struggle to find value. Crafting a Zombeast is, of course, hard to rate. Depending on the Beasts you get offered, you might get some monstrous, highly synergistic stuff, or weak, high-cost minions that you will never get to use. But I actually think that in a current meta (and presumably upcoming meta), Scourge Tamer is better than Deathstalker Rexxar. Hunter’s Death Knight card is just painfully slow – you first need to pay 6 mana for almost no effect, then pay 2 mana for every Zombeast, and you rarely need “infinite value” as Hunter. This one is cheap, has no requirement and just gives you Zombeast straight up. It’s like a single use of Deathstalker Rexxar’s Hero Power with a 2/2 added on top of it. No matter whether it will be good or not, I will probably play around with it just for the sake of nostalgia and maybe getting some crazy outcomes.

Technically, Bloodseeker seems like a good fit in this package, but I’m honestly not sure. Yes, it has a nice synegy with Shockspitter, but the problem is that Bloodseeker benefits from you holding onto it for a long time, sometimes not attacking for a few turns in order to trigger Honorable Kill. But I don’t think that’s going to fly in this deck – even with average draw, you should be attacking very often, and if you hold onto a single weapon for too long, others would clog your hand. Not to mention that you want to play Hope of Quel’thalas as soon as possible, and it might be awkward to replace let’s say a 4/2 Bloodseaker with a 4/2 Hope. But feel free to give it a shot!