Kudos to Team 5: who would have thought that we would receive not one, but two unexpected balance changes at the end of a Standard rotation? To be fair, the first one was mostly surprising due to the fact it was announced less than 24 hours before going live – but this one is truly a shocker. Never have we received a double set of nerfs inside on expansion cycle, and such aggressive targeting of Classic cards so close to a rotation is also a very thought-provoking (and controversial) move by the Hearthstone developers.

Another One Bites the Dust

Apparently, the December card nerfs were just not good enough: five more are going to take a hit to their power level with this update, four of which are from the evergreen set. Apart from Emerald Spellstone’s price increase – intended to make the card less viable as a tempo option in Wild –, the stated goal is the same for all of these changes: to make them less of an auto-include going forward. Your mileage may vary about whether this description actually applies to all of them… 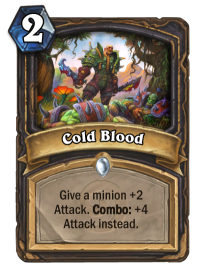 The headline adjustment has to be the one made to Cold Blood: costing two mana, it is now a strictly worse Eviscerate, also impossible to include in Odd decks. While the change may make sense if you consider the current constraints in Standard, an important teaching opportunity (and deckbuilding conundrum) was lost: putting the two cards side by side, it was clear that the reason Eviscerate cost twice as much was that it was balanced out by the requirement to stick a minion on the board. Of course, that didn’t actually come into play very often thanks to the Charge keyword, but now Cold Blood is only worth including for redundancy reasons, making things just a little less interesting.

The change to Flametongue Totem is yet another one of those baffling adjustments to Shaman. The class is already struggling, had to suffer through a nerf to its core hard removal option, its only viable Standard deck was butchered and now its aggressive, token-based approach – not even very effective in the current environment – was forced to take a hit. It’s tough to figure out an explanation as to why this is the class that’s targeted so heavily. The last – and only – time Shaman was a problem was during the early parts of the Year of the Kraken. Aggro Shaman was very strong during the WotOG days – and eventually got hit by nerfs to Rockbiter Weapon and Tuskarr Totemic – but the class’ true rise to dominance came during One Night in Karazhan thanks to its busted Midrange archetype. Not only did that deck get away without a nerf, but even the MSoG days only saw an adjustment to Spirit Claws, a non-evergreen card. These latest changes feel incredibly weird and unwarranted knowing the class’ history. 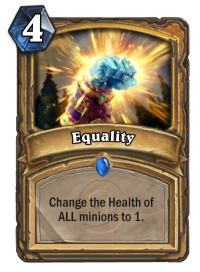 The nerf to Equality highlights a key problem introduced by Baku the Mooneater and Genn Greymane: in many cases, simply bumping up a card’s cost by one mana is no longer a viable option to change it. A three-mana version of this spell would be an auto-include in Odd Paladin for the rest of time. However, it’s worth mentioning that the card really wasn’t an omnipresent tool in Paladin decks before: most aggressive decks opted against running it due to the prevalence of cheap Silence options or a lack of reliable ways to deliver that one point of damage required.

There’s also another reason to disagree with this change: while it’s true that it’s a powerful board clear coupled with Wild Pyromancer, many classes have two-card full clears, and Paladin’s other option in the form of Consecration has never been that strong, especially when you consider that it is often required as an Equality activator in a pinch. The class’ slower archetypes always struggled against fast, swarmy opponents – now it has even less of an opportunity to fight back. This is not a problem Shrink Ray is going to help with, and much like Fiery War Axe, it feels like the permanent removal of an important control tool for nebulous reasons in the current Standard environment. 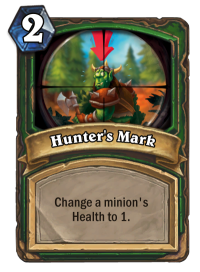 Can you believe that Hunter's Mark originally cost zero mana? Again, it feels like its second nerf has more to do with the other tools made available to the class than anything wrong with the card itself. Hunter has historically lacked reliable hard removal and card draw: now that both were printed in copious amounts, propelling Rexxar to the top of the charts, it’s time to adjust… the one that is permanent. Interesting.

Rounding off the changes, Hunter’s Emerald Spellstone is getting the Patches the Pirate/Raza the Chained treatment, getting a kick in the backside just as it’s leaving Standard. It’s likely the least controversial of the bunch, though one has to wonder why it was so urgent that it had to be pushed out in February.

One of the main reasons why many are looking forward to the first set of 2019 is that it will mark the first release that was developed after the departure of Ben Brode and co. in its entirety. We’ve been reading the tea leaves for a while now about how the “new kids on the block” intend to change things, but it’s becoming clear that they’re more than willing to bring a sledgehammer to bear, especially where the Classic set is concerned.

For me, the concern comes from putting these severe changes side-by-side with their incredible about-face over Giggling Inventor, a card that went from “intended […] to be powerful because we’ve found that having powerful neutral Taunt minions tends to make games more interesting” to “one of the most powerful and popular cards we’ve ever created” that “stepped beyond its intended role” in less than a month in their eyes. While showing increased flexibility is great by itself – remember how long it took for them to finally do something about Undertaker? –, making far-reaching changes like these about evergreen cards coupled with massive swings in opinion feels like a toxic, overly reactive combination. 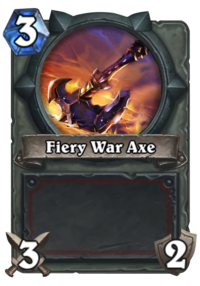 It’s also worth mentioning that most cases where omnipresent cards were touched in order to only make them viable in certain archetypes led to their complete unplayability: just ask Mana Wyrm, Fiery War Axe, Rockbiter Weapon, Call of the Wild, Abusive Sergeant and many of their other friends in the trashcan.

All in all, the increased frequency (and arguably, the severity) of these changes are making the Classic set’s evergreen status less and less tenable over time – something we’ve discussed fairly recently on the site –, and it will be really interesting to see how this incarnation of Team 5 treats the Hall of Fame rotations at the end of the Hearthstone year. So far, it seems like they prefer the good ol’ nerf bat to Harrison Jones’ battlecry.