In the past, we’ve looked at How to Get Cards Without Spending Money and How to Decide Which Card Packs to Buy, but what’s to be done with all those new cards in your collection? This guide will take you through the ins and outs of managing your Hearthstone collection to get the most out of the cards available to you.

For inexperienced players, especially, the Hearthstone collection can be a little intimidating. About one hundred cards are available immediately and that number only increases over time. As such, knowing how to properly navigate, evaluate, and act on the cards in your Hearthstone Collection is critical for players at any stage.

Before getting into the details of managing cards in your Hearthstone Collection, it helps to understand how to properly navigate through the sea of minions, spells, and weapons. Those with large card pools, especially, can benefit from both filtering and searching the collection to display only relevant cards.

The Hearthstone collection can be filtered to display cards of the desired Format, Set, Cost, or Class. 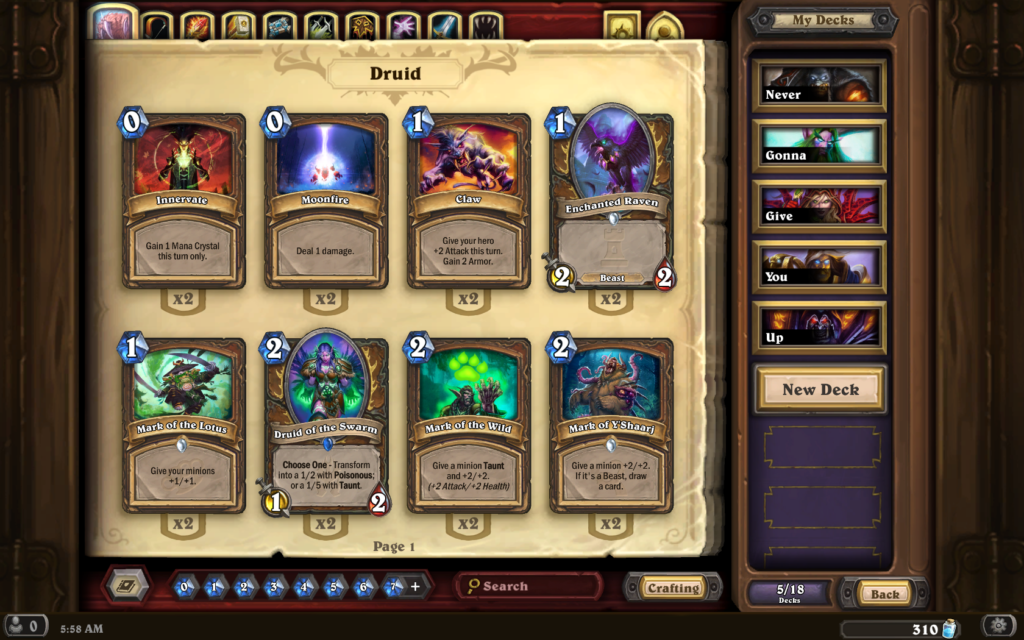 Note: Building a deck will automatically filter the collection based on the corresponding Format and Class.

The search functionality within the Hearthstone Collection is quite robust. Within the collection, players can search for text within the cards, mana cost, rarity, card type, and much more.

An exhaustive list of search keywords can be found below to help in finding specific cards within the Hearthstone Collection [source].

When it comes to building a formidable Hearthstone card collection, card crafting is the most efficient means of assembling the right assortment of cards. While not as exciting as ripping open virtual card packs, the ability to choose specific cards should not be underestimated. Card crafting is especially important for new and budget Hearthstone players looking to make competitive decks for the Ranked Play ladder.

Be sure to check out our Legendary Card Crafting Guide!

As a result, Arcane Dust is arguably the most valuable resource in Hearthstone. With few exceptions, Arcane Dust can only be accumulated by disenchanting cards. Knowing which cards to part with can bank enough Arcane Dust to craft the perfect combination of minions, spells, and weapons to form a potent ladder deck.

Our list of Safe to Disenchant Legendaries will help you make difficult dusting decisions!

When considered appropriately, Card Statistics, Deck Building, Class, and Card Set can be a valuable reference for how to efficiently manage your Hearthstone collection. This guide will utilize these topics to take you through several strategies for determining which cards are worth crafting and which may provide more value by being converted to Arcane Dust.

As a reminder, the crafting value of all card rarities is provided below.

HSReplay.net has a wealth of statistics related to individual cards that can be used to your advantage when managing your Hearthstone card collection. Here, you can find insightful metrics such as the percentage of decks a card appears in, the win rate of those decks, and the win rate a card has when played.

While, in a game as complex as Hearthstone, it’s impossible to assign a deck’s win rate solely to a single card, but this information can be used to your advantage when it comes to deciding which cards to craft or disenchant.

Occasionally, however, these statistics can be deceptive or only tell part of the story. In general, powerful cards tend to be popular but try to consider the complete picture when analyzing these statistics, rather than viewing each metric in isolation.

For instance, Patches the Pirate has an extraordinarily low Played Winrate. This doesn’t mean he’s a bad card, as indicated by the very high Deck Winrate the card has, rather that playing the card is not where its strength lies.

On the flip side, power cards, such as Ultimate Infestation, have an extremely high Played Winrate. Attributing this to that one card alone would be a mistake. In reality, ramp cards are at least partially responsible for the high Played Winrate of Ultimate Infestation. If a Druid player is able to spend 10 mana on UI, it is often the result of ramping 10 mana crystals efficiently which, in and of itself, can put the player in a winning position.

Finally, when it comes to popularity, keep in mind that neutral cards and class-specific cards cannot be directly compared. Neutral cards tend to have a higher inclusion rate simply because they can be played in multiple classes, and therefore more decks. Win rates, as well, need to be considered in the context of the decks in which a given card fits. Savannah Highmane having a relatively low win rate associated with it doesn’t make it a weak card, it may just be that Hunter, as a class, has weak matchups at the time of checking the stats.

As mentioned, looking at cards in isolation doesn’t tell the whole story. There’s no denying that Ultimate Infestation is a powerful card. That said, dropping 800 Arcane Dust only to jam the card into Aggro Token Druid isn’t a going to be very effective.

Similarly, having a pile of valuable cards that never see play serves little purpose outside of players looking to collect cards for collection’s sake (which is a perfectly reasonable goal). If a players goal is competitive play, it becomes essential to assemble the right assortment of cards into a potent deck.

As such, having a deckbuilding in mind when making both crafting and disenchanting decisions is critical.

This site has a frequently updated list of the Best Standard Ladder Decks that can be used as a starting point for decks to start building towards. New and budget players may benefit from working to assemble some of the Budget Decks that, while less potent than their meta counterparts, are all competitively viable.

Once a deck is in mind, players can determine which core cards are missing and prioritize those in their crafting efforts.

Inversely, cards from decks that players have either no interest in building or are lacking numerous other cards can be avoided, no matter their popularity or potency. In some cases, some of these cards can even be considered for disenchanting in order to build towards more desirable decks.

In general, Class Cards tend to be more powerful than Neutral cards. A clear example can be seen when comparing Fierce Monkey to Ironfur Grizzly. Both cost 3 mana and have Taunt, but the exclusivity of Fierce Monkey offers an additional health.

Additionally, the class a given card belongs to can impact its relative value to a player. If a player is partial to a certain class, he or she may wish to collect as many cards for that class as possible. On the other hand, if a player dislikes a class’s mechanics, he or she may way to rid them self of all cards associated with that hero.

When it comes to crafting, the relative strength of class-specific cards is balanced by the fact that neutral cards can be played in decks for multiple classes. This flexibility makes powerful neutral minions a valuable craft for players with few cards in their collection.

The Year of the Mammoth consists of Journey to Un’Goro, Knights of the Frozen Throne, and a yet to be released expansion. All three sets will rotate out of the Standard format with the release of the first expansion in 2019. Aside from the Classic Set, these cards have the highest lifespan and, as a result, have a higher return on dust investment. On the flip side, some restraint may be necessary when it comes to disenchanting cards from these sets. Cards that are currently weak may receive support before rotating out of the Standard Format.

The Year of the Kraken consists of Whispers of the Old Gods and Mean Streets of Gadgetzan expansions (One Night in Karazhan as well, but that’s an Adventure). Both sets will rotate out of the Standard format with the release of the first expansion in 2018. Compared to Year of the Mammoth, cards from these sets are less valuable crafts and can be disenchanted more freely due to their impending expiration date.

Since the inception of the Wild format, Hearthstone players have been left with the difficult decision of whether to disenchant cards that rotate into Wild. While there is a smaller player base and less competitive play than Standard, Wild offers a lot of unique synergies with nostalgic cards.

The questions you must ask yourself in determining what to do with your Wild-specific collection are “How much value does the dust have to me now?” and “What is the likelihood I become infatuated with the format down the road?”. No one but you can decide what the “best” choice is in this case, but those looking to focus on the Standard Format will find themselves with a cache of Arcane Dust should they choose to dust their Wild cards.

Those looking to play competitively can use the strategies outlined above to quickly assemble a few top-tier decks which, when piloted effectively, can attain high ranks. Some players simply find joy in card collecting itself and wish to only dust duplicates. Others yet have different goals in mind for their Hearthstone collection and may choose to act differently. As such, a “quality” is a relative term when it comes to a Hearthstone collection and may look very different between players.

In the end, working towards a card pool that meets your specifics goals within the game should be the main emphasis when it comes to managing your Hearthstone collection.