In our second edition of Lore of Bosses, we take a look at the history of the most prominent bosses featured in Saviors of Uldum’s single player adventure, Tombs of Terror!

This time we examine bosses that either have a specific background in World of Warcraft or Hearthstone itself. As predicted in our earlier look at the possible lore settings for Saviors of Uldum, at least two WoW dungeons have set the stage for Tombs of Terror, which is filled with both famous encounters from the golden World of Warcraft days as well Hearthstone heavy-hitters!

Be sure to check out Lore of Bosses: Heist of Dalaran here!

Lost City of the Tol’vir

The Lost City of the Tol’vir is one of four 5-player dungeons in WoW’s Uldum. After the terrible cataclysm caused by Deathwing’s uprising, he managed to make a pact with Al’Akir and his Skywall servants with the master plan to overtake Uldum. Al’Akir then forged an alliance with the Neferset, one of the two big tol’vir clans.

In exchange for their loyal services they retrieved their titan-forged stone forms, which had been removed by the Curse of Flesh decades ago. As a result, they took back the lost city in the very heart of Uldum, led by none else then Siamat, Lord of the South Wind and loyal commander of Al’Akir.

Luckily enough, Siamat’s manifestation is more than unstable beyond his usual Skywall habitat, and although the Neferset tried to use that immense overload of power to their advantage, this volatility is key for bold adventurers to take back the city that belongs to Uldum and Uldum only.

You could say that General Husam serves as the “city guard” that you have to defeat to enter the inner parts of the Lost City. Looking at his arabic name which can be translated as “sword”, Husam is more of a fighter than anything, and that shows during his encounter in the 5-player dungeon in World of Warcraft.

Similar to Ramkahen’s High Priest Amet, High Prophet Barim spiritually leads the nefarious Neferset. In the Lost City, Barim tries to fulfill the Neferset’s evil plans of abusing the power of Siamat, an elemental lord that was sent by Al’Akir to overtake Uldum together with the tol’vir.

In his encounter he uses both holy and shadow magic to hinder the adventurers from continuing through the 5-player dungeon. Both of these magic schools have been transported perfectly in Barim’s Hero Power called “Burst of Light”, which deals damage to enemy minions while stealing life at the same time.

As we all know by now, Siamat is one of the most high-ranked lieutenants of Al’Akir, the Elemental Lord of Air. After the Cataclysm, Uldum’s protective barrier crumbled, and Deathwing wanted to take the land of the titans and all its artifacts. For that he recruited Al’Akir and his minions who escaped from the elemental plane called Skywall.

Initially ordered to lift the curse of flesh that the loyal Neferset tol’vir have been afflicted by, Siamat’s powers eventually faded and the tol’vir captured him inside the city, as they wanted to use him in the battle against the rebellious Ramkahen tol’vir.

However, several adventurers managed to fight their way through the city and eventually freed Siamat from his chains, only to be battered to elemental pieces by the crumbling ruins of the city.

In terms of card art, Siamat received a very unique treatment: Back in WoW’s TCG, Siamat was a card of one of the last sets called “Tomb of the Forgotten”. TCG art he was depicted in, however, had been used for the League of Explorers card Djinni of Zephyrs as well as the LoE Boss Zinaar (which is HS original). For his Hearthstone card, Siamat thus was treated with new original card art. 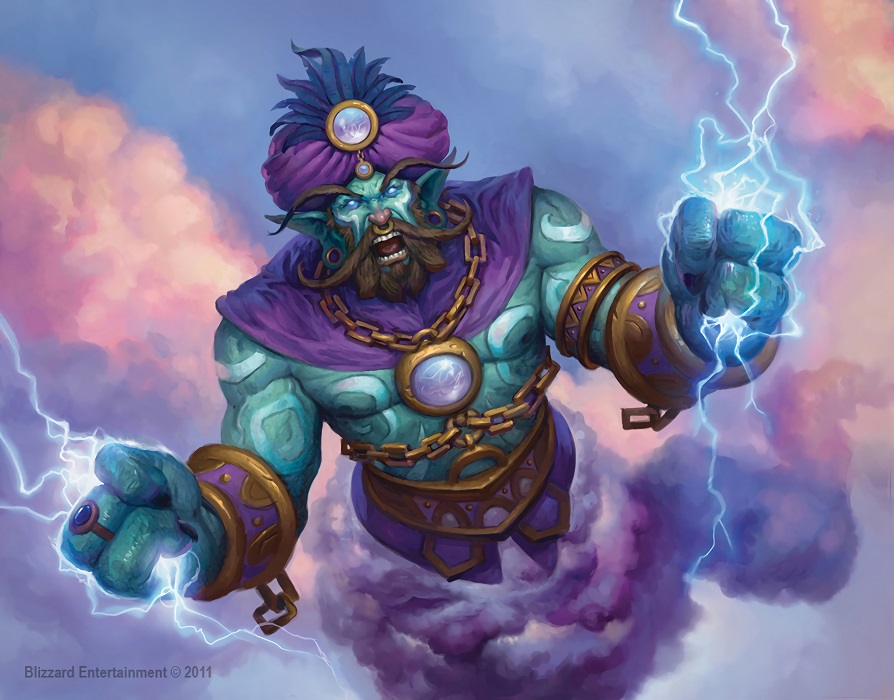 In WoW, Earthrager Ptah – a creature created through the bones of the enemies of the Neferset tol’vir – guards the entrance of themain pyramid within the correspondent 5-player dungeon.

Ptah is a named bone wraith and basically looks like the SoU card Bone Wraith. The first time this type of creature had been sighted was in Icecrown Citadel in the form of Lord Marrowgar, which Hearthstone players battled in the Knights of the Frozen Throne single player campaign as well.

The fight against Earthrager Ptah mostly stood out because of its impressive visuals; in general, WoW’s Cataclysm expansion brought in a lot of new visual tech and effects, making this fight a real treat for the eye!

The main pyramid within the Halls of Origination is protected by four different titan constructs. Each of them stores a certain sphere of influence, defining their “archetype”. In the 5-player dungeon, Brann leads the adventurers into the inner sanctum to explore the ancient mysteries around the titan apparatus called the Forge of Origination.

Isiset is the Construct of Magic who uses arcane energies and mirror images to protect the forge that has been built to protect Azeroth. Sadly, the immense power granted by the titans took control of her – and that applies to Hearthstone as well!  Conjured Mirage shows one of Isiset’s mirror images roaming around Uldum.

As it is with many names surrounding Uldum as a whole, Isiset’s names has egyptian roots. Looking at her phenotypical physique it was most likely Isis, wife of Osiris and the goddess of fruitfulness, who most likely served as a template.

Just like Siamat, Isiset and the other dungeon bosses existed back in the WoW TCG. Isiset’s card art, however, stayed almost the same. Almost? Well, see for yourself! 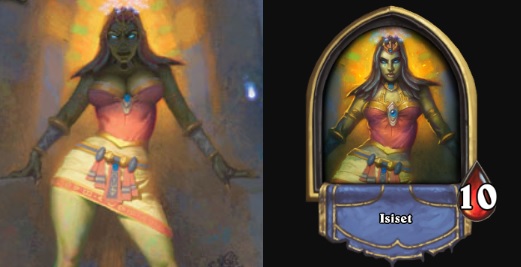 Ammunae, the Construct of Life, symbolizes the forge’s ability to re-establish basic life forms in case of a possible “reset” of Azeroth. His Egyptian original is Amun, the god of creation and life, and leader of the New Kingdom and the Egyptian pantheon.

In the Halls of Origination, Ammunae tries to use nature magic to overgrow possible intruders. That, of course, fits the general Druid class fantasy, explaining his excessive use of Druid cards.

Similar to the other constructs, Ammunae had his place in the WoW TCG as well. His powerful card art had been used in Hearthstone before for the Orsis Guards in the Temple Escape of League of Explorers. Unlike Siamat, Ammunae got back his original TCG artwork.

Where life is, there is death as well, and that is where Setesh comes into play. As the Construct of Destruction, he plays a starring role in protecting and showcasing the power behind the Forge of Origination.

His specialty, of course, lies in the use of chaos magic; in Hearthstone as well as World of Warcraft, this often results in cursing your opponent, which is shown through Setesh’s hero power that curses a minion to damage the opponent instead.

Rajh is the last of the four constructs guarding the Forge of Originiation, and probably the most powerful of them. As Construct of the Sun, he controls the ability to provide both  life and death through “the fury of a thousand suns”.

The most interesting thing about Rajh in Hearthstone though is his original WoW TCG art, which has been used for a very special card called Avatar of Coin. 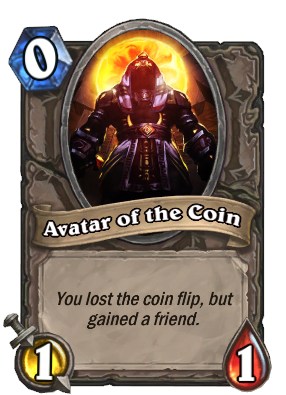 You don’t know this card? No wonder, because it has only been used in Hearthstone’s alpha phase during development. The topic of balance between the second and first player in Hearthstone has always been a heated one, so having Rajh on your side would have been more than fitting! Sadly, this card never made it into the live game and was ultimately replaced with The Coin.

In World of Warcraft, Mister Chu is Madam Goya‘s bodyguard, keeping her safe from all the baddies trying to take advantage of the Black Market, which she runs ever since its introduction in Mists of Pandaria.

Once a playable hero in the Dalaran Heist, he’s now on the other side in the Tombs of Terror!

Vessina (another playable Hero from Dalaran Heist) is a part of the Sethrak race, which are rumored to be one of the next allied races in World of Warcraft, because they share very similar core values compared to other Horde races. Just recently the Vulpera have been announced as the next allied race for Horde, but there’s still a high chance that Sethrak will be a part of it in the future.

We all know and love Leper Gnome, one of the most iconic aggro cards in the history of Hearthstone. However, these very, well, special species doesn’t look to be very advanced. 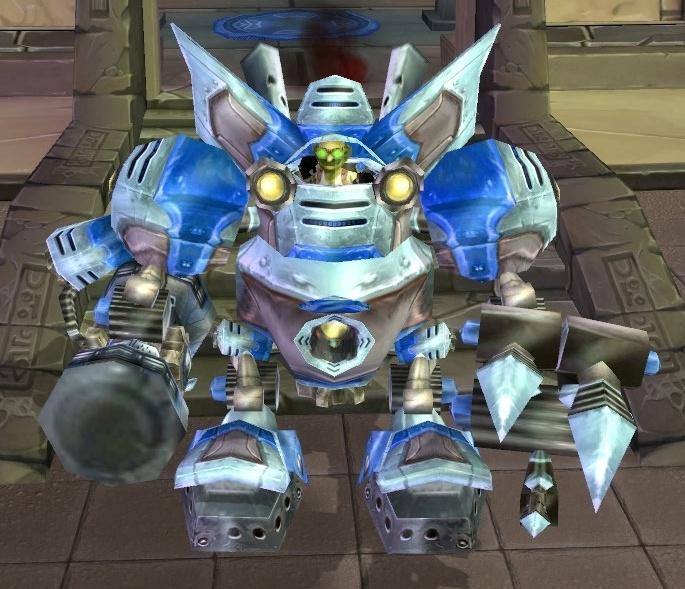 And Twizzleflux is the expcetion to that rule! Once leader of one of the biggest gnome expeditions to Uldum, him and his team found a promising tomb and opened it. But what they discovered wasn’t riches and gold – no, they got cursed! From then on he called himself Twizzleflux the Insane, and – led by the curse – built a magnificent robo-suit that enabled him to enslave even more expedition members and roaming adventurers.

Colossus of the Sun

Finally the brother of Colossus of the Moon made it into the game! Originally built to protect an artifact called the Scepter of Orsis, they seem to take part in the ongoing fight between the explorers and the League of E.V.I.L.!

In the Dalaran Heist single player campaign it is Ol’Toomba who gives away that Elise Starseeker had already been in the desert of or around Uldum after her card is played, spoiling the possible theme behind the upcoming Saviors of Uldum expansion. Does he spoil anything else this time around?

Belloc Brightblade is a high-ranked member of the Reliquary, the blood elf equivalent and thus Horde counterpart to the League of Explorers, who try to get the best out of the ongoing conflict in the desert of Uldum. 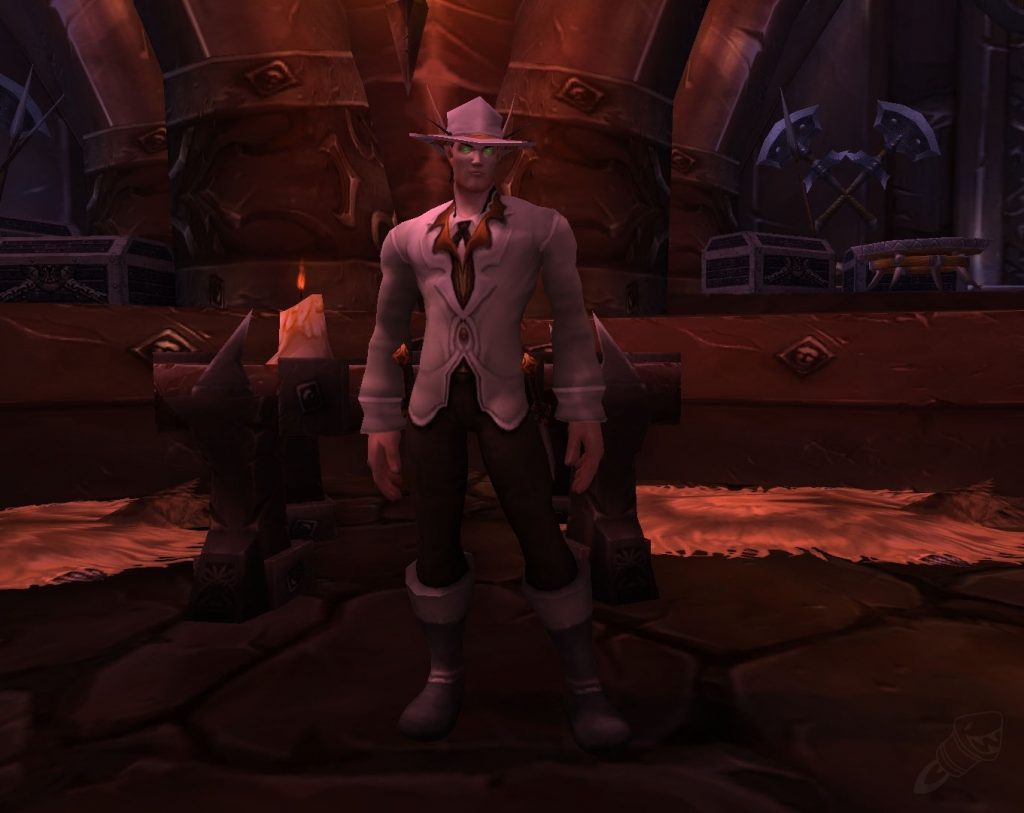