With the most catchy tune in teaser-trailer history, Blizzard has announced that Saviors of Uldum will be Hearthstone’s twelfth expansion. In World of Warcraft, this ancient land of the titans guards countless treasures, and that makes it a top priority in the great plan of Arch-Villain Rafaam and the League of E.V.I.L..

But little do they know that the League of Explorers has been combing through the desert as well, and they are more than prepared to defend Kalimdor’s most precious artifacts!

The Facts – Why Uldum?

In the recently released teaser-trailer we learn that Dr. Boom’s rocket drive attached to the whole floating city of Dalaran really has kicked into second gear, warping him and the League of E.V.I.L. straight to South Kalimdor.

Although we know that goblin engineering may not always turn out as the most relient tech, it should become pretty obvious that reaching Uldum as their next destination went just according to Rafaam’s master plan. In fact, Uldum has been part of Rafaam’s plans and Hearthstone history already!

Back in League of Explorers, Hearthstone’s third adventure after Curse of Naxxramas and Blackrock Mountain, Brann Bronzebeard and his colleagues sought to re-assemble the Staff of Origination, one of the worlds most powerful titan artifacts, to exhibit it in the Hall of Explorers in Ironforge.

One of the three staff pieces, the Rod of Sun, laid hidden in the Temple of Orsis, located in the middle of Uldum. Together with Reno Jackson, the player successfully escapes the collapsing temple after defeating Sun Raider Phaerix who protected the Rod of Sun.

Looking back at one of the most creative content updates of the game, the League of Explorers adventure paved the way for Hearthstone-exclusive characters and lore. Rafaam as the main antagonist was one of the first major characters that has been built up exclusively in Blizzard’s card game, and his storyline around the Staff of Origination paid homage to ancient Warcraft history while Hearthstone lore started to develop its own kind of comical twist that we all love today.

Funnily enough, the Saviors of Uldum expansion is bound to do the exact same thing: The introduction of the fan-favorites around the League of Explorers serves as a tribute to the first Hearthstone-exclusive storylines, while the location of Uldum couldn’t be a more iconic stage in terms of canonical Warcraft lore.

Now that we know that Rafaam is no stranger to Uldum, we still have to take a look at the history of this desert-like place.

The Setting – Land of the Titans

You don’t have to be a master geographer to know that deserts didn’t always look like deserts, and the same goes for the land of Uldum. As we know from the Chronicles books, Uldum – just like the majority of Southern Kalimdor – was a jungle covered in rich flora.

During the Ordering of Azeroth, which could be described as the genesis of the world we know today, the titans designed Uldum to become a fortress that was bound to protect the Forge of Origination.

This device was installed by the titans to protect the world-soul of Azeroth, but also to obliterate the planet in case it gets corrupted in some way. The titanic watcher Ra, a demi-god that served the titans, was ordered to protect the Forge of Origination together with the anubisath and tol’vir who inhabit Uldum up to this day.

As it is with most powerful devices in the World of Warcraft, the forge located in Uldum was associated with the power of providing eternal life and thus became more than interesting for various factions. Most noticeably, Lei Shen, the Thunder King, sought to get it under his control.

In a dramatic turn of events, the tol’vir defending Uldum activated parts of the forge and defeated Lei Shen and his powerful mogu army, but also eradicated their homeland as a whole and turned it into the desert of today. To prevent future enemies from entering Uldum, the tol’vir installed an energy shield around the zone to protect it, and that worked perfectly – until the Cataclysm desolated Azeroth and broke the shield.

Driven by the spirit of research, Brann Bronzebeard and the League of Explorers made their way into Uldum; but they weren’t the only faction to advance into the unknown lands. The Reliquary, a group of blood elf archeologists and Horde counterpart to the League of Explorers as well as Harrison Jones and his arch-nemesis Commander Schnottz looked to unveil the secrets behind the Forge of Origination.

Uldum is without a doubt one of the most underappreciated landmarks on all Azeroth – mostly because we and the other heroes in Warcraft lore still know so little about it. The fact that Lei Shen has been released as an alternative Shaman Hero together with the Master Bundle back in June without really getting noticed as a a heavy pre-expansion spoiler only supports this claim.

As already said, we know very little about Uldum, and the same goes for the general setting of the upcoming expansion. However, we can look back at the Rise of Shadows expansion and its single-player campaign Dalaran Heist and try to find related patterns inside the Uldum storyline.

The first obvious hint at a similar development compared to RoS is the fact that the four League of Explorer protagonists each belong to one of the remaining “Dalaran Defender” classes – we know from Mike Donais that Elise will be a Druid, Reno a Mage, Brann a Hunter, and Sir Finley a Paladin.

Looking at the League of Explorers expansion, all four of them were Neutral Legendary cards back then, so applying class identity to each lore characters would have been very challenging no matter what. However, Team 5 really doubles down on their very own lore and game history with these decisions! For example, both Reno Mage and Murloc Paladin are very iconic archetypes of the past, and that very well may have influenced the class choice.

Elise has been known as a Druid since early 2017; her darnassian (the tongue of night elves) attack line “Aluth Neladar!” is a druidic attack spell, as we know from Peter Whalen. Fun fact: We also know that Elise’s original card art shows a clear map of – you guessed it – Uldum!

Another similar pattern could lie within the upcoming single-player campaign. We have seen that Heist of Dalaran featured a total of five separate wings, each one representing a different part of the city. And the same could happen with parts of Uldum!

The zone in World of Warcraft holds a total of four dungeons in Uldum: First there’s the Vortex Pinnacle, the floating palace of Al’Akir himself, who teamed up with nobody less than Deathwing to disrupt the happenings within the zone that had been laid free after the Cataclysm. The second 5-player instance is the Lost City of the Tol’vir, an ancient old town of the cat-like tol’vir who pledged allegiance to Deathwing as well – only to remove the Curse of Flesh from their mortal bodies to become the titan-forged creatures they once were.

Last but not least, the Throne of the Four Winds in Uldum is one of the raid dungeons of the Cataclysm expansion. As already said, Al’Akir teamed up with the mighty Deathwing, and the Throne of the Four Winds is where you will meet the Elemental Lord of Air himself. Despite him being the weakest of the Elemental Lords, the final fight of this raid may be one of the most iconic encounters in all of World of Warcraft. How cool would it be to see a Hearthstone homage in one of the single-player wings against everybody’s favorite Shaman Legendary card?

And yes, we know that we need not four but five wings in total to mirror the single-player campaign of Rise of Shadows! Luckily enough, Uldum holds tons of other open-world points of interest such as the Temple of Orsis that we already know from the League of Explorers expansion, the Ruins of Ammon, or Ramkahen, the main quest hub of Uldum.

As the base for one last theory serves one of the very few released cards of the upcoming Saviors of Uldum set: Puzzle Box of Yogg-Saron. 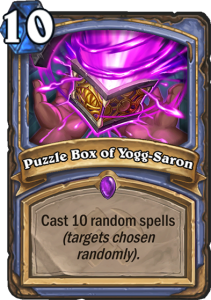 In the World of Warcraft, this particular item is a rare archaeology artifact toy which holds many secrets. When used you will receive one of many whispered one-liners, such as:

Already creeped out? Well, this item from Cataclysm has been putting a Lovecraftian vibe into lore discussions ever since. Even with Battle for Azeroth, Blizzard decided to put in a unique interaction between the box and the boss Zek’voz in Uldir, the first raid of the expansion.

From one of Mike Donais’ answers on Reddit, we know that Reno Jackson finds the box in Uldum, and this statement is fully supported by the beautiful card art. But what could that mean?

Sure, it’s most likely just another precious artifact that could be used against the League of E.V.I.L. – but what if this card announces the comeback of yet another certain Hearthstone squad, the Old Gods from their very own expansion Whispers of the Old Gods?

Warcraft lore lovers know one thing: Where the titans did their work in the past, the Old Gods have never been far, and this goes especially for Uldum. We know nothing about the third expansion of the Year of the Dragon yet, and although the teaser picture of it has a certain Dragon vibe to it, we could very well see some sort of Old Gods influence, especially after looking at the current happenings in the World of Warcraft.

Saviors of Uldum once more shows how self-sufficient Hearthstone lore has become; at this point it is already able to reference itself thanks to the comeback of several lore heavy-hitters with both the current and the upcoming expansion. It will be exciting to see how and if Saviors of Uldum will continue this trend of establishing Hearthstone as a lore stand-alone Blizzard title!