Zilliax is a unique card in Hearthstone. Introduced in The Boomsday Project, it has been part of the game for a year and a half, and its popularity has been unparalleled and shows no signs of waning. No matter how you look at the data, Zilliax is by far the most popular card in the game. It started out by being part of roughly one-third of all decks, a share it still retains in Wild, and with the Standard rotation of 2019 that removed the immensely powerful expansions from 2017, its popularity in Standard jumped to roughly 60% and has stayed there ever since. It is in more than 60% of decks in Legend, on rank 5, and even between ranks 10 and 25. It was in more than 60% of decks throughout January, before Galakrond’s Awakening, and it remains equally popular now that all the wings of Galakrond’s Awakening are here.

Yet, Zilliax has not been nerfed throughout this time, nor have nerfs to it been demanded widely, unlike with many other meta-defining cards.

In this article, I will take a deep dive into the world of Zilliax. What makes it so good? Why has it not been nerfed? How is it used? Is it really still worth using, or is it put in decks out of habit?

Everything but the Kitchen Sink

Everything but the kitchen sink. Oh wait, there’s one on his back. 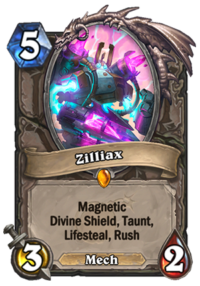 Zilliax’s flavor text says it all. It has everything, even a kitchen sink on its back. For a five-mana card, a 3/2 stat line seems kind of weak, but Zilliax more than makes up for it with its plethora of keywords: Magnetic, Divine Shield, Taunt, Lifesteal, and Rush. It also carries the Mech tribal tag, which synergizes well with other cards released in 2018.

Because of its flexibility, Zilliax can be used in multiple roles. It protects you, removes threats, provides healing, and can even provide burst damage in combination with an existing Mech on the board. Yet, its stat line is low enough so that it does not seem too intimidating: Three-damage burst for five mana is not too big of a deal, most aggro decks can do better. Three healing for five mana, and only if there is something to Rush into is not a whole lot, but it does put a Taunt minion on the way too, although one that can be removed with just about any damage spell. Every individual thing Zilliax does, it does in a somewhat mediocre fashion.

Zilliax’s strength is in being able to do multiple things at the same time: it can remove a threat, heal you for three, and put a Taunt minion on the board, all at the same time and at the cost of only a single card. If you’re playing a control deck or even a midrange deck — that sometimes has to take on the control role against faster decks — making all of these things happen simultaneously for the cost of just a single card can be extremely valuable.

Why Has Zilliax Not Been Nerfed?

Zilliax’s apparent lack of power is deceptive. Lots of cards get nerfed when they do something really strong and that completely frustrates the opponent. The only matchups that Zilliax wins almost on its own are aggro matchups where the defender has other Mechs in the deck alongside Zilliax. In such cases, Magnetizing Zilliax on an existing Mech can just completely shut down the aggro player. Given that Hearthstone already favors the attacker by design — the attacker gets to choose where their minions strike, unlike in most card games — Zilliax’s strength against aggro decks can be a desirable feature from the designers’ point of view. 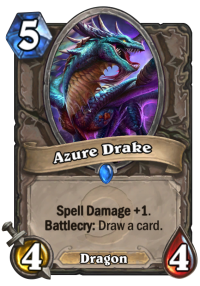 Zilliax has been allowed to stay unnerfed, because it helps to balance the game between aggro and slower archetypes. In particular, Zilliax helps to keep midrange decks safe from aggro: they can make use of its ability to defend and also its ability to contribute to the attack. With Taunt and Rush, Zilliax promotes minion combat, which has always been a key part of Hearthstone. Minionless combo or control decks do not exist in the game, and combo decks are never allowed to become too good. Pure aggro can be too frustrating to play against, so the types of decks that succeed in Hearthstone are by design midrange decks, and Zilliax is their foremost champion. Sure, it also helps control decks and sees some play in Mech-based aggro decks, but it is the defensive matchups of midrange decks where Zilliax makes the biggest difference.

Doesn’t it get too boring to always have Zilliax in every deck? Not necessarily. It is a rotating card, after all, and on its way out in April 2020, so as long as its power level is not too abrasive, it can have its two-year run as a staple. This is in contrast with Azure Drake, which was an evergreen card that was sent to the Hall of Fame in 2017, because it was the go-to five-drop for an extended period of time and, as a Classic set card, it could have remained so in perpetuity.

How Is Zilliax Currently Used?

For Hearthstone, 2018 was a year when Blizzard attempted to slow down power creep: the expansions were clearly weaker than their counterparts from the previous year. In contrast, 2019 has been a free-for-all power creep time with immensely powerful cards emerging left and right. Yet, in the middle of this all, Zilliax is at the peak of its popularity. How can such an old card still maintain such a powerful position? Is it really that good, or do players just put it in their decks out of habit? Where does Zilliax truly belong? 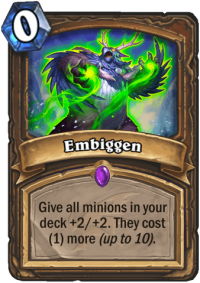 Embiggen Druid provides an interesting case study because the deck became so immensely popular after the first week of Galakrond’s Awakening so the sample sizes on statistics sites are huge. The three star players of the deck are Embiggen, Strength in Numbers, and Breath of Dreams. The best minion in the archetype is Oasis Surger, but Zilliax comes in right behind it. Because of the huge sample sizes with slightly different variants, Embiggen Druid provides the best test bed to compare Zilliax’s performance with and without SN1P-SN4P, another powerful Mech card that can provide a great magnetization platform for Zilliax. Turns out, Zilliax is equally effective with or without SN1P-SN4P! I actually did not expect that. The two go together in so many decks, but at least in a deck with Embiggen, a solo Zilliax is just as good as the Zilliax + SN1P-SN4P combo.

There are other archetypes that come with and without the combo too, the most popular of which are Galakrond Rogue, Galakrond Warlock, and Highlander Hunter. In all of these decks, Zilliax performs relatively better when it has other Mechs to keep it company, especially SN1P-SN4P. Without other Mechs, Zilliax tends to be in the bottom quarter in performance, whereas Mech synergies can promote it to the top half of the cards in the deck. There is some positive correlation with Dragonbane in Hunter, too, but SN1P-SN4P seems to elevate Zilliax the most. This seems logical, because SN1P-SN4P‘s Deathrattle leaves fresh Mechs on the board for Zilliax to Magnetize into.

In all of the above midrange decks, Zilliax is a key card against aggro decks even without further Mech support, and more Mechs help it perform better against slower decks, against which it is typically not very powerful.

Zilliax also sees play in practically all control decks at the moment. Control decks are always defending, so a great defensive tool seems like a perfect fit. In practice, Zilliax is better, the greedier the control deck is. It is phenomenal in Resurrect Priest and Highlander Mage, decks that do very little for several turns and need good tools to start stabilizing in the mid-game. In Highlander Warrior, Zilliax is near the bottom: Warrior has tons of removal and armor gain already, and it is less reliant on Zilliax whooping in to give a bit of health and protection.

Aggro decks do not include Zilliax on a regular basis: if you’re always the aggressor, there are better ways to deal damage than Zilliax. Dragon Hunter, Face Hunter, Token Druid, and Zoo Warlock do not want to spend five mana for a three-attack minion. Zilliax is part of Mech Paladin, but it is one of the lowest-performing cards in the list, so it is not clear whether even a Mech-based aggro deck really needs Zilliax at this time.

One of the few slower decks that do not use Zilliax is Quest Druid. Quest Druid already has access to a powerful five-mana Rush minion in Oasis Surger, and it has plenty of healing and armor gain in Hidden Oasis and Ferocious Howl. Once the deck completes the Quest, getting both Choose One effects at once is enough to push its class cards above Zilliax.

Is Zilliax Still Worth It?

So, should Zilliax really be used as much as it is? The data is somewhat inconclusive. Zilliax is never a terrible card. Even in decks where it is in the bottom quarter, there are other cards that seem to perform worse. On the other hand, Zilliax is one of the absolute top cards in only a few decks: Embiggen Druid, Resurrect Priest, and Highlander Mage. Zilliax is at its best as a defensive card, a role that it can perform even as the sole Mech in the deck, but if you want to get any offensive use out of it, it is useful to bring some more Mechs along for the ride. Still, even the purely Mech-based Mech Paladin cannot get a whole lot out of Zilliax as an offensive tool. 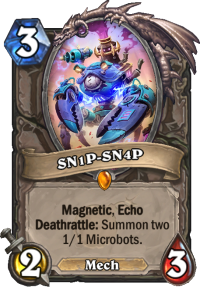 Therefore, it looks like the inclusion of Zilliax can be questioned in some decks, especially Mech Paladin, midrange decks that do not include SN1P-SN4P, and control decks that are able to get into the game early, such as Highlander Warrior. It is still possible that no other card can perform better than Zilliax in these decks, but none of them are able to fully benefit from it, either.

The meta always matters, too. Zilliax is at its best against pure aggro, and if there are lots of aggro decks in the meta, Zilliax becomes more important for midrange decks. With the recent success of Dragon Hunter and Mech Paladin, Zilliax might have a lot of life left in it all the way to the Standard rotation.

Overall then, yes, Zilliax is still great. However, the current data imply that there are some decks that might do well without Zilliax as well if some other card can serve their game plan better. Do not include the card in your deck out of dogma, even if it is almost omnipresent at the moment.