Our Tess Miracle Rogue deck list guide will go through the ins-and-outs of the potentially viable deck from the The Witchwood Expansion! This guide will teach you how to mulligan, pilot, and substitute cards for this archetype! For now the deck guide is theorycraft, but as soon as the expansion goes live we will start updating it right away! 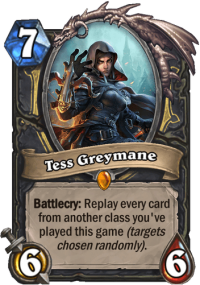 Miracle Rogue is probably one of the most persistent decks in Hearthstone. Despite multiple nerfs, cards rotating out etc. it seems to keep coming back thanks to its powerful Classic shell, with win conditions changing depending on the meta.

This time around, I feel like one of the ways to play Miracle Rogue might be by including the new “Burgle” package. I think that building an entire deck around Burgle mechanic isn’t good enough yet – there are just not enough support cards. However, by adding only a small package, we can still keep the main Miracle shell intact, while adding an extra long-term win condition in a form of Tess Greymane. Even summoning just a few minions or casting a few spells can go a long way in Miracle Rogue – and if you get good ones, you can even use Shadowstep in order to replay her.

Against Aggro, your early game plays are most important. Backstab is probably your best card, because its lets you clear an early game threat without taking any damage. Your turn 2 will most likely be Hero Power, and your 2 mana cards aren’t great keeps anyway. However, your 3 mana slot has some great keeps. Both Blink Fox and Hench-Clan Thug are good keeps no matter if your’re going first or second, while Edwin VanCleef is a great keep on the Coin. It’s still good going first if you can combo it with Preparation + a spell. Other than that, Fan of Knives might be a good keep against decks that tend to flood the board with low health minions early. If you have some of your early game tools already, keeping 4-drops like Elven Minstrel (if you have a way to combo it) or Fal'dorei Strider can be good.

Deck’s general play style is not that far off from the Miracle Rogue you see now on the ladder. Basically, getting lots of mid/late game tempo is your main win condition. You want to set up the Fal'dorei Striders to put lots of free 4/4 tokens into your deck, then use Gadgetzan Auctioneer with some cheap spells to cycle through your deck as quickly as possible.

So instead of talking about the general strategy, I’ll focus on the new cards and their role in the deck instead: