Our Miracle Rogue deck list guide for The Boomsday Project expansion and will teach you how to play this archetype. This Miracle Rogue guide includes Mulligans, Gameplay Strategy, Card Substitutions, and Combos/Synergies! 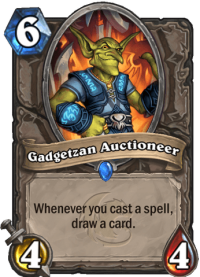 Miracle Rogue has been a deck archetype since before the Hearthstone Beta was even released, when players were testing out the cards on simulators. However, the basis for the more modern builds was popularized by Kolento in February 2014. The archetype has changed many times since then, and the original concept of growing minions comes and goes, but many features of Miracle decks have remained the same, especially their heavy emphasis on card draw and swing turns. One of the attractions of learning Miracle Rogue is that it is a very hard deck to master, and therefore very rewarding when you become proficient in playing the deck. The skills learned transfer from expansion to expansion, and the best Miracle Rogue players are usually good at all styles of the deck.

Historically, Rogue decks have always been fast, playing on the board and dominating it through early tempo plays, accumulating an advantage until it becomes insurmountable for the opponent. This is usually achieved by playing multiple cheap cards that synergize with each other in quick succession. Unfortunately, in the current meta, the tempo gained by Rogue is dwarfed by simple tempo plays available to other classes. While Rogue is able to deal with some powerful single threats, such as Mountain Giant and The Lich King thanks to Sap or Vilespine Slayer, other cards render them nearly useless. For example the wide boards generated by Odd Paladin and the ever-returning demons from Skull of the Man'ari. Combined with Rogue’s weakness to the direct burn and the endless board clears, Miracle Rogue finds itself in a very challenging position in the current meta.

Miracle Rogue can still pull off some impressive plays where Gadgetzan Auctioneer draws rapidly through the Rogue’s deck and some impressive lethal puzzles where Leeroy Jenkins, Shadowstep, and Sap combine forces to push through formidable barriers, but the deck is more difficult to play and less powerful than the main meta decks at the moment.

We’ve listed a popular version of Miracle Rogue below (credit to Fluffy), we’ll be updating the guide soon!

Aggressive decks have always been Rogue’s weak point, as the class lacks the healing to survive, even after stabilizing against them. There is a fine balance between trading and hitting face in these matchups; you should look to trade some of their stuff in the early game so you can avoid some damage early on, but you should also look to push damage to their hero, as they can probably close the game out pretty quickly. Do not be afraid to use Cold Blood early on so you can force them to trade their board, or use removal/burn on your minion. 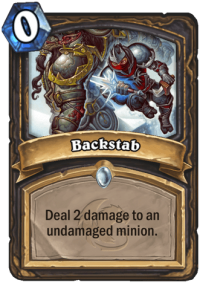 This is the matchup where the deck shines! Here the deck has enough time to develop its game plan without being pressured too much and pull off the famous “miracle turns”. In these matchups you are the aggressor and need to put pressure on your opponent. 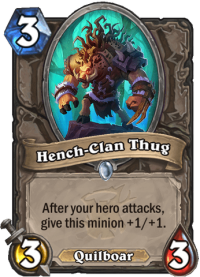 The Miracle playstyle is usually associated with high tempo plays that are Rogue’s signature move and massive swing turns in which the deck’s pilot turns the game around with powerful combo synergies. Historically, builds that burst from hand have been both popular and successful, and the current Miracle Rogue builds have a respectable amount of burst from hand, especially with Leeroy Jenkins, Shadowstep, and two copies of Cold Blood, all of which can combine to up to 20 damage from hand for ten mana, even though Cold Bloods are most of the time used for damage already before the final burst.

However, the deck generally does not have enough damage from hand, and needs to get in chip damage from the board first. Hench-Clan Thug and your early minions can really help with that, giving you the ability to close out the game with a Leeroy Jenkins + Cold Blood + Sap.

The deck starts really slowly (the only high tempo turn you can make early is a big Edwin, and Hench-Clan Thug to a certain extent) and really takes off in the mid game (there is an argument for Coin into SI:7 being a really powerful turn but while the tempo is undeniable, the impact can vary wildly between matchups).

Aggro matchups are your Achilles heel. Without any healing or taunts, you are pretty susceptible to face rush decks, especially if they manage to get some chip damage during the first couple of turns. There’s little you can do about it, as aggressive decks are a counter, but every game is winnable, so don’t despair!

Your highest priority in aggressive matchups is to kill everything and not take too much damage while doing so. Think about long-term survivability. Try to trade into everything and don’t be afraid to use your face to do so, but keep track of your life total. Stabbing something hurts, but in the long run you protect your health pool more by preemptively eliminating a source of repeating damage rather than letting it hit you over and over again. This strategy can work especially against Paladin, as their reach without a board is limited. Things are less rosy against aggressive Mage decks, who can typically burn you down in the midgame.

One of the best early game moves is making a huge Edwin VanCleef. Try to get it as big as possible, but don’t over-commit. Even using Preparation or Coin for nothing, just to get +2/+2, might be a good idea some of the time. Having an 8/8 or 10/10 in the early turns can win you the game, because now instead of trading you can start racing the opponent. If you combine it with removal or Sap, you should win that race very easily since you can usually put them on a three-turn clock and they can’t really get rid of the big body (keep in mind, most aggressive decks run 1-2 copies of a silence minion). 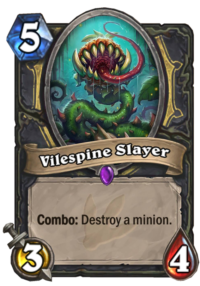 Even without Edwin, there is usually a point at which you need to switch the gears and start pushing damage. Unlike Control decks, you will never truly “stabilize”, since you can’t put a big Taunt or heal yourself up. When you get to the point when your board is significantly stronger than their board, stop trading (or rather pick only the most necessary trades) and go for their face instead. Try to get a big tempo swing turn, using Cold Blood on your own minions, Sap and/or Eviscerate on opponent’s minions and ideally set up lethal next turn (or at least the turn after). Your opponent will know what’s going on and likely have to play defensively, at which point you already won – Aggro deck playing defensively can rarely be a challenge to you, as they can rarely swing the tempo back in their favor.

Switching gears should usually happen after a big swing turn from you – like clearing their board while having something up yourself, getting two random 4/4 Spiders from your deck, successfully clearing a bigger threat (e.g. Stormwind Champion vs Odd Paladin) with your Vilespine Slayer, dropping a huge Edwin they can’t answer and such. If you keep playing defensively, you give them more time to actually do something. At this point, your health total is usually low, so the longer you wait with your push, the higher the chance that your opponent might find a way to just kill you. 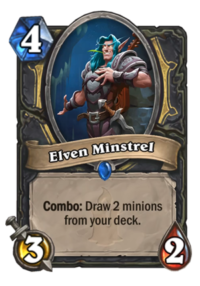 The most important virtue to have in the slower matchups is patience. You want to be saving your cheap spells for a big Gadgetzan Auctioneer turn rather than wasting them for incremental advantages that might not end up accumulating in your favor. Control decks run powerful answers and can clear big boards with a single card, so you should be looking to get more mileage out of everything you have. It’s very important to plan your Auctioneer turns. You don’t expect Auctioneer to survive, so you need to get all the draws upfront. You want to drop him on 6 only if you have multiple zero-mana spells to go with him. If you have two Auctioneers, you can go lighter on the first one and bait a removal at the same time. If at all possible use Elven Minstrel before Auctioneer to remove some minions from your deck so that you are more likely to keep drawing spells on the Auctioneer turn.

The basic win condition of the deck is to constantly present threats, turn after turn, so eventually your opponent runs out of ways to deal with it. Hopefully, it happens before you run out of cards. It’s important to mention that this deck tends to draw a lot of cards and usually doesn’t have the capability to put cards back in the deck, so you have to make sure to win in a timely manner before fatigue becomes a real issue: many Miracle Rogue games are won with no cards left in your deck, while the opponent still has a third of their deck remaining. Be careful with your Auctioneers and kill them off if necessary, or you may fatigue yourself pulling off a lethal combo. 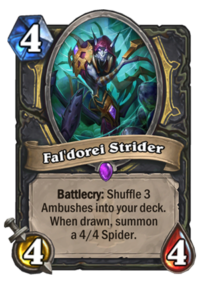 Tempo swings are incredibly important. When you can, for example, clear your opponent’s board while also developing something yourself, or you develop multiple strong minions out of nowhere in the mid game, those are your best ways to win. For that reason, Fal'dorei Strider might be the most important card in the deck in slow matchups. While yes, Auctioneer is also a necessary piece (after all, you need to DRAW those random 4/4’s), it’s those “free” minions you get from Fal’dorei that win lots of games. If you play both copies, you will get up to 6 free 4/4’s (up to 9 if you decide to Shadowstep Fal’dorei, which is sometimes a correct play) throughout the game at random moments. Sometimes you will already have a big board and they will just die to AoE, but other times they will actually create a board presence just after your opponent has used a board clear. Even if half of them get to attack ONCE, that’s still 12 damage for free, as well as keeping your opponent busy for multiple turns, in which they would normally just develop.

Even if you don’t overwhelm your opponent on the board, you should be able to deal some chip damage here and there. And this is where your second win condition comes into action – burst damage. Leeroy Jenkins is already a solid burst card, dealing 6 damage (7 with your Hero Power). But, you can combine it with multiple other cards to deal even more damage. You can mix it with Shadowstep (extra 6 damage), Cold Blood or Eviscerate (extra 4 damage each). Dealing 14-16 damage is quite common, but you can get even higher if you keep the right cards (29 is the max you can deal, but it’s incredibly unlikely, as it requires Leeroy, Shadowstep, 2x Cold Blood, 2x Eviscerate and 2x Preparation in your hand, as well as dagger equipped)

Miracle Rogue is not the most expensive deck in the world, but it plays some cards that found home only in this specific deck, especially Epics that might be hard to get. Some of them can be replaced, others can’t. I will list all of the expensive cards and talk about them, while showing some potential replacements below.

And here are some cards you can use as replacements. Remember that the more cards you replace, though, the weaker your deck will get: