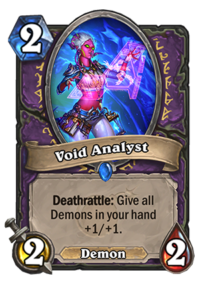 Zoo Warlock is an archetype nearly as old as Hearthstone itself, and we’ve seen dozens of different versions of this archetype.  In The Witchwood, a Heal version of Zoo Warlock has surprisingly taken over the ladder by storm roughly a month ago. It has proven that Zoo has serious potential, and Boomsday has brought some new, interesting tools that the deck can use. While it might turn out that Heal Zoo will still be the best version of the deck, just with a few small changes, it would be a pretty boring theorycraft. So instead, I’ve decided to go for a Demon-oriented version of the deck.

The version I’ve created takes some serious risks, especially in the health department. It might turn out to be a new hit, or it might be literally killing itself faster than the opponent. That’s the fun part of theorycrafting, you never know!

First thing I want to address is the lack of Prince Keleseth. One of the main reasons why Zoo decided to go for the Keleseth in the first place was lack of good 2-drops. When Vulgar Homunculus was introduced back in the Kobolds & Catacombs, players have tried out the non-Keleseth version, because Homunculus is a really strong 2-drop. It turned out that it still wasn’t worth it and everyone played Keleseth again. Right now, another good 2-drop is getting released – Void Analyst. It shares the Keleseth’s stats and has a similar effect. While it works only on the minions in your hand (and only Demons), it also means that you can run two copies, as well as Homunculus. Is it good enough to drop the Keleseth? I honestly doubt it – I think that the Keleseth version will still be better. But we won’t know until we test it out. 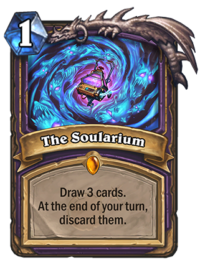 First new card I want to focus on is The Soularium. I believe that this Legendary spell is the best thing that has happened to Zoo in a while. Drawing 3 cards for 1 mana is a completely broken effect. While you obviously won’t use it consistently, often you will play only 2, sometimes even 1, but it’s still not that bad. The card has so many uses. You can drop it if you’re looking for a specific mana play (e.g. if it’s Turn 4 and you don’t have anything to do, you can play this and hope to get a 3-drop, or possibly a 1-drop + a 2-drop), a specific card (like Doomguard or Soulfire to close out the game), or simply want more resources in the mid/late game. Zoo Warlock runs out of cards really quickly, but at the same time, it doesn’t really care about losing any specific card – they’re all disposable and Zoo can win the game without any of them. In the late game, situations in which you end up drawing a 1-drop, and then tapping into another 1-drop are simply worst – you aren’t really putting any pressure on the board. Those are the moments in which The Soularium will shine – you will be able to draw 3 extra cards and possibly even play all of them, making a big push on the board. 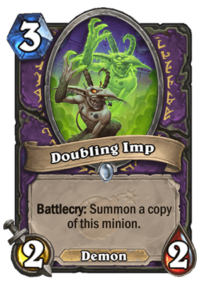 Besides The Soularium, this build runs a bunch of different new cards. Void Analyst is one of them. This card will be mostly useful in the early/mid game, when your hand size is still relevant. 16 of the minions in your deck are Demons (2 of them are Void Analysts), which means that there is a significant chance to have at least 2-3 of them in the hand in the early/mid game, and buffing them can be pretty significant in a Zoo deck. The most notable buff target would be Doubling Imp, which “double-dips” on the buffs – getting out 2x 3/3 minion on Turn 3 is really great in Zoo. But it can get even better – Soul Infusion is another card the deck plays. 1 mana for a +2/+2 buff is already pretty good (you can make some early game tempo pushes – like buffing Vulgar Homunculus to 4/6), but it works even better if you land it on Doubling Imp or Saronite Chain Gang. In case of those two, it becomes 1 mana +4/+4, which might be good enough to win some games by putting lots of pressure (you know how good getting down a T4 Chain Gang buffed by Keleseth feels like – this is going to be even better). You want to manipulate your hand in a way so those will get the buffs most often, but a more expensive card might be stuck on the left side of your hand sometimes. Putting it on most of the minions isn’t bad – e.g. buffing Doomguard to 7/9. Probably the worst target would be Hooked Reaver, but it won’t happen that often. 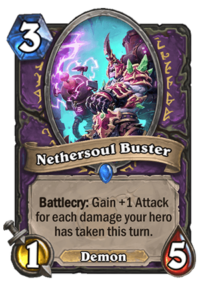 Now, onto the self-damage package. Outside of buffs, this deck is full of self-damage effects, as well as some cards that benefit from them. The good old Hooked Reaver might finally be good in Zoo Warlock thanks to the Crystallizer. Trading 5 health to 5 Armor will make activating Hooked Reavers in the mid game way easier. Having just a few health points too much was pretty common, and Crystallizer can get you down from 20 to 15. 4 mana 7/7 would obviously be strong, and it will be sometimes possible to drop it on the curve now. The second card which benefits from self-damage is a new Nethersoul Buster. It starts as a mere 1/5 for 3, a card you wouldn’t really want to play. But just one self-damage card, or even Life Tap, and it’s AT least a 3 mana 3/5, something you wouldn’t mind playing in Zoo. However, it can go even higher – combo it with Crystallizer and it becomes a 3 mana 6/5. In the mid/late game, getting it to 8-9 attack will be pretty common. It will be really useful in slower matchups – if they don’t immediately kill it, you kill them.

On top of that, the deck runs pretty standard Zoo cards, some of which were played ever since the first versions of the deck a few years ago. Like I’ve mentioned already, it’s hard to say whether this version will be better than a Keleseth version, or the Heal Zoo version. For example, card slike Nethersoul Buster or Hooked Reaver have potential to be really powerful, but are a bit risky to play. Playing them with their base stats really suck, but on the other hand, they’re completely overpowered when activated. So you need to be able to activate them consistently. It’s hard to say whether you will be able to without actually playing around with them, but that’s exactly what I will do early in the expansion. After all, best decks in the history of Hearthstone wouldn’t be created without experimentation – even seeing Heal Zoo for the first time, I thought that it just can’t work and it’s a meme deck, so I was obviously surprised when it was all over the ladder a few days later. 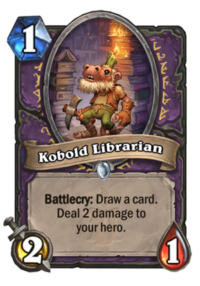