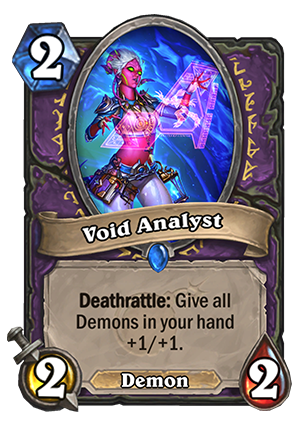 Deathrattle: Give all Demons in your hand +1/+1.

Pretty cool card, but I think that it came out too late. A while ago, Demon Zoo build was pretty popular and it worked quite nicely. It used Demonfire, Bloodfury Potion, Crystalweaver and a bunch of Demons. This would fit right in.

Right now, there are three main issues. First – Zoo decks aren’t exactly Demon-heavy. I mean, they DO run Demons, but not at an incredibly high density. Second – past the early/mid game, you nearly always empty your hand every turn, so this would be a vanilla 2/2 minion… not very exciting. And last, but not least – Prince Keleseth. +1/+1 for all minions is still better. Of course, when Warlock reaches a certain amount of good 2-drops (like Vulgar Homunculus), you might want to drop the Keleseth, but I don’t think it’s this one.

On the other hand, I don’t see it being played anywhere outside of Demon Zoo deck. I mean, giving your Doomguard and Voidlord +1/+1 is not really worth a card slot and diluting the pool of Demons for DK Hero. Maybe some Midrange Demon Warlock build will pop out eventually, Skull of the Man'ari would actually make it quite interesting.

So overall, it’s okay, might see some play in the future, especially after Keleseth rotates out. But it’s not amazing, nor I think that it will be played right now.