Face Hunter is making a bit of a reemergence with some of the cards from One Night in Karazhan. Thanks to Cursed for allowing us to re-host his guide.

I have posted deck guides many times in the past and I am here once again to present a face hunter deck I have been testing and doing fairly well with after the release of kindly grandmother.

The point of this deck is pretty straightforward, get ahead on the board using your powerful 1-2 drops during the early game and start pushing for heavy damage as soon as possible.

Having Argent Squire, Worgen Infiltrator and Kindly Grandmother is very hard to deal with effectively minions, and will help you set up for good trades and also enable powerful plays capitalizing on buffs from Dire Wolf Alpha and Abusive Sergeant. After the first 2-3 turns you should try to always be aware of the damage you can deal with the cards you already have , as well as with the possible draws you might get.

Try to maximize hero powers in most situations and think ahead on how you will be splitting the damage dealt on each turn to get the most of it. Whenever you get to use steady shot with this aggressive deck it is almost like using a card , so hero powering a lot is the key to not running out of gas until you can close the game. This is particularly important against decks that can heal-armor up, so long term maximum damage becomes more relevant.

Of course, always be aware of potential early kills, especially if your opponents have a slow or sub-optimal start. I usually try to pinpoint the turn I should be able to kill my opponent and distribute my damage accordingly. If you happen to fall behind, in many cases the correct play will be to just ”stupidly” go face and rely on drawing the correct cards that will allow you to race your opponent. Wasting too many resources to stay alive is usually a losing play, that will not even give you an unlikely out.

First of all, why no Call of the Wild? 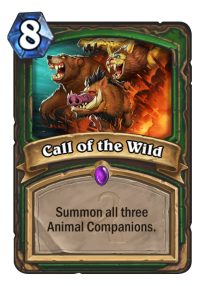 Call of the Wild might be an extremely powerful card , but it just does not fit this faster aggressive style of hunter. Hunters running Call of the Wild can be at best a hybrid build, that looks to run you out of answers by dropping strong minions, along with pressuring your health to force sub-optimal use of removal.

In a Face Hunter deck however, where you are looking to straight up kill your opponent as fast as possible there is no room for Call of the Wild. After all it is only 5 damage for 8 mana (without board).

Futhermore, no Cloaked Huntress too?

Another great card that was just too inconsistent to include. Sure, the dream of dropping a Cloaked Huntress, followed by a bunch of secrets is quite appealing. Gain a lot of tempo with the plus of emptying your hand to ensure Quick Shot drawing a card. However, in a fast deck like this that does not have draw-cycle mechanics running a lot of secrets along with Huntress and getting stack with only some parts of the combo is catastrophic.

So, taking care of that , I was quite certain that the decklist should look something like this to begin with: http://prnt.sc/c9u8fr

Run Abusive Sergeant and Dire Wolf Alpha to maximize Kindly Grandmother impact and include Argent Squire since they are great with buffs and difficult to cleanly kill. Have strong chargers to help you close the game, along with what is the best secret for this type of deck, Explosive Trap. Explosive Trap is guaranteed damage unlike other secrets, while also being our only real defensive mechanic (aside the occassional Misha).

For the final spots I took into consideration various possibilities. The best performing ones were: Huge Toads, Hunter's Mark + On the Hunt, Deadly Shot, Lance Carriers.

I ended up preferring Knife Juggler to Huge Toad, since they can easily snowball with all the cheap minions in this deck. Mark and deadly shot shenanigans, though pulling some devastating swings against Shamans and Druids, I would more often than not find them sitting in my hand and even getting in the way of drawing with Quick Shots. Lance Carriers made the deck even faster and more aggressive but they also seemed inconsistent since I would end up in situations where I would have an empty board and a lance carrier in hand early on.

I decided in the end to improve the consistency of starting strong with Worgen Infiltrator and cut an Unleash the Hounds, due to facing a lot of Warriors and Priests.

Squires worgens and kindly grandmothers are what you want to see in your starting hand , followed by ways to buff them and trade them up. Be ready to deal with a coined Grandmother early on so it does not mess up your development. Try to activate potential secrets when the time is right and don’t just walk in an Explosive Trap with a huge board. Most Hunter’s at the moment are midrange so you should be able to kill them fairly easy, just be sure to keep a balance between skipping too many hero powers and running out of damage and taking the game too slow, thus giving them time to drop their powerful minions and race you. Watch out for Houndmaster as much as possible and always expect a Call of the Wild on 8 if the game drags that long.

There are many Warrior decks popular at the moment. Your mulligan is generally the same, since they all will be running the fun-killer trio of Blood To Ichor – Fiery War Axe – Ravaging Ghoul. Worgen or Fiery Bat is the best turn 1 going first , followed by Grandmother into anything that doesn’t just die to Ghoul, ideally Animal Companion. Going second you want either Squire or Worgen regarding 1 drop or ideally a coined Grandmother into double 1 drop, one of which to be squire to survive Ghoul. Against slower Warriors you want to keep a constant pressure with minions and hero powers. Versus Dragon Warriors its all about taking the board early and using to do efficient trades while pushing cheap damage. Lastly, cycle Warriors like OTK-C’Thun cycle or the new flavor Patron with giants luck any major armor gain engine and early threats so just pushing damage as fast as possible should ensure victory.

Mulligan for your minions that push the most damage. Animal Companion is so good that I always keep it on the coin even as the single keep. Push early and then try to get 2 minions that can survive the turn 5 AOE. Be ready to efficiently kill a Priest of the feast around turn 4-5.

Here we need sticky minions to buff up or use along spells/bow to get the board early. We need to pull ahead so by the time a faceless is played we can just ignore it and go face. Don’t forget to play around Maelstrom Portal as soon as you get the board advantage, throwing some hero powers instead of developing weak minions.

Against Reno, we want to curve with minions that don’t get coiled turn 1 and then be ready for a good trade on imp gang on 3 if possible. Aside that we just kill them as fast as possible. Against Zoo mulligan for your sticky early drops and don’t underestimate their board at any point, take all the good trades you can get. Drawing into an Explosive or an Unleash in the midgame usually ensures an easy win.

When facing Freeze Mage you want to get fast start along with a Grandmother that trades well with Loots and Doomsayers. Try to plan your turns in a way that you will have a strong play even if your board gets frozen, such as Bow + hero power or Kill Command + hero power.Try to pop them before 9 , a defensive Alexstrasza rarely can lead to a win. Facing Tempo Mage the strongest card to get is Bow. They have a ton of annoying removal but running them out of minions and into awkward spell-only hands is a common scenario.

Most Paladins pack more than enough heal to survive anything we can throw at them if the game reaches the late game. Go face as hard as possible! Kindly Grandmother again great against hero powers – small annoying minions and Doomsayers.

No matter the Rogue, you always keep Bow in your starting hand. Try to use hero power over weak minions, since Rogue can keep on effectively removing your board. Get good trades on their 3 drops and then snowball into face.

Aim for a fast start, while playing around swipe as much as possible. Animal Companions is usually hard for them to remove, unleash its vhuffer”] so even better. You should try to plan around innervated minions by keeping spells/buffs in hand to kill them. Furthermore, explosives and unleash can punish a greedy token-spawning play.

If you have questions feel free to ask me anything, or send me a recording of your games and I will comment on them on my stream. I also plan on using this deck to race to legend after reset this season.

or book me for coaching at :