Our Tempo Priest deck list guide for the Ashes of Outland expansion will teach you how to play this budget list. This guide includes Mulligans, Gameplay Strategy, Card Substitutions, and Combos/Synergies! 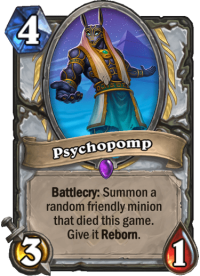 Tempo Priest is not the deck you think about whenever that class comes up. And no wonder – Resurrect Priest or Highlander Priest are better options. However, the problem is that they also take more Dust to create. While Resurrect Priest could still be seen as a reasonably budget deck (you could build it for 5-6k Dust), Highlander build is crazy expensive. That’s why for the budget build we’re stuck with is Tempo Priest, which might not be as good, but it’s easier to build using cheap cards. Good news is that the Epic of this build – Psychopomp – is a Preist staple used in nearly every deck for the class, so crafting it is a great investment if you’re using this class.

As for the Tempo Priest, it’s kind of an unique archetype and – to be honest – the closest to Blizzard’s outlined Priest class identity after the Basic/Classic rework. The deck relies on board control, buffing and healing up your minions, cloning them, but all of that without the “unfair” Divine Spirit combo. You want to get onto the board early and stay there all game long, possibly finishing the game with Inner Fire (but again, not in the OTK “combo” way, but simply as a card that gives a minion +6 or +8 attack). The deck is pretty fun to play and I honestly hope that card designers will push Priest in that direction instead of the Resurrect build.

Your strategy revolves mostly around minions. You have no other way to win the game – no burn damage, no combo, no incredible late game value, no removals etc. That’s why you want to focus on this one game plan and not get sidetracked – play minions, keep them alive by healing/buffing them, make efficient trades, kill your opponent. Tempo Priest is not a late game deck. Ideally you want to close out games around Turn 6-7, because after that you will likely run out of steam. With that in mind, let’s look at your main ways to win the game. 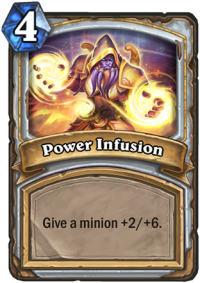 Against faster decks, as long as you stay ahead on the board, you should be set. Aggro decks have no real way to clear your board, so if you keep doing efficient trades, buffing your minions, putting up Taunts to protect the more valuable ones, they should have a very hard time. At the same time – if you fall behind, you’ve lost. While you can still sometimes save the day with a clutch Psychopomp, it’s rather unlikely. It’s important to keep your minions alive, because a lot of your cards rely on you having them. For example, your Power Infusion is a pretty strong buff. For example, you can turn your 1/4 Overconfident Orc that was already hit into a 3/10 Taunt, but it’s useless if you have nothing to put it on. That’s also why you mulligan 100% for your minions and not buffs – you will draw the latter eventually, but having the former is a requirement to play them anyway.

Against slower decks, it’s more about playing against removals and not against other minions. Your goal is to drop as much stuff as possible as quickly as possible so they can’t remove it. You have a very limited time – when they start dropping big AoE removals, big Taunts etc. they you won’t likely win the game. Inner Fire is a key in those matchups – buffing health of a minion and then turning it into let’s say a 8/8 with Inner Fire is a great way to win the game. Even better if you also manage to hit it with Psyche Split – it’s like Faceless Manipulator on steroids. The +1/+2 might not seem like much, but it’s basically doubled, since both the old and the new version gets it. Which means that copying even a relatively small minion (e.g. a 3/4) is not bad. Another important thing is to not put all of your eggs into one basket. If you do, a single big removal or even Zephrys the Great can really make your life miserable. But if you spread your buffs between 2-3 minions, your board will be harder to answer. You won’t lose to a single target removal, but they will also be out of AoE range. 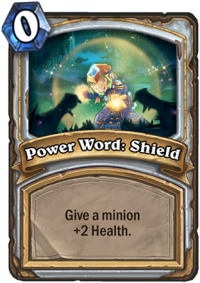 Power Word: Shield at 0 mana is for the most part a nerf compared to the old version (when it costed 1 mana and drew a card), but it has its advantages. It costing 0 mana means that you can drop it on whatever the turn you play it on curve. For example – a 2/2 Dragonmaw Overseer can is much easier to clear than a 2/4 one. And if you stick it, then you have a much higher chance to win the game. Similarly, you can use it on a minion when you copy it with Faceless Rager or Psyche Split to double its effect (+2 Health for 0 mana is okay, but +4 is amazing).

While you don’t have many “sticky” minions, you still want to have some insurance against AoE clears. If you know that your opponent might drop a big AoE, having minions with Reborn is really good. If you already have a solid board presence and you’re afraid of AoE, you can still drop Grandmummy or Psychopomp, since you will end up with something even after AoE (and having a minion means that you have a buff target). Imprisoned Homunculus is also a nice hedge against AoE – while it’s Dormant, it won’t be damaged or destroyed by anything (sadly it can’t attack the turn its played, but it can still be e.g. copied).

Tempo Priest is a rather cheap deck, but there are indeed some cards you might want to add to it in order to make it better. While none of them is absolutely “necessary”, they will all improve your win rate slightly:

And here are the cards you can cut to fit the ones above:

However, keep in mind that even a full build of Tempo Priest is only okay (it’s not a meme tier deck, but it’s not very powerful). I recommend upgrading it only if you happen to get those cards anyway or if you really like the gameplay. If you want to craft something, Resurrect Priest is a better option.