Our budget Secret Mage deck list & guide for the Darkmoon Faire expansion will teach you how to play this budget list. This guide includes Mulligans, Gameplay Strategy, Card Substitutions, and Combos/Synergies! 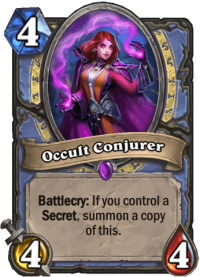 Blizzard did what Blizzard does very often – pushed an archetype right before lots of its key cards will rotate out. This time it’s the Secret Mage – a deck that has been one of the most popular Wild archetypes for years now, and one that hasn’t seen any competitive Standard play for nearly as much time. However, now that cards such as Ancient Mysteries, Arcane Flakmage or Cloud Prince will be gone in just a few months, we’ve got a bunch of new support cards. Two most notable ones are Inconspicuous Rider and Occult Conjurer. Oh, and Sayge, Seer of Darkmoon, but since we’re playing a budget build, I obviously couldn’t put it in. Similarly, with our budget limit of 2 Epics in total, I had to choose between Conjurer and Rigged Faire Game, but I do believe that Conjurer is the more important card.

As for the deck itself – full Secret Mage build is actually surprisingly good. It’s probably the best way to play Mage in the current, early expansion meta (can’t say how it will be a few weeks from now, but I don’t think that it should change much without some major balance updates). AS for the budget version… well, it lacks a few key cards, so it’s sadly not as good. In particular, card draw is the biggest issue, because both Rigged Faire Game and Sayge draw cards. But if you have those cards or you’re willing to spend some extra Dust on crafting them – well, it will be a quite solid deck. 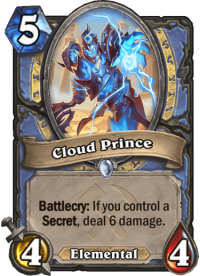 Secret Mage, just like the name’s deck suggests, bases its gameplay heavily around Secrets. But the truth is that Secrets themselves aren’t enough. Yes, they can summon some minion or stop whatever the opponent was trying to do, but they won’t win you the game. That’s why you mostly rely on cards that get more powerful with Secrets. The best example is the new Occult Conjurer – very weak by itself, 4 mana 4/4 is not something you would EVER want to put into your deck… but 2x 4/4 for 4 mana is very powerful, 8/8 stats in total, and the fact that it’s spread between 2 bodies makes it so much better against Aggro, since you can trade off small minions much better. Another example is the already quite old Cloud Prince. It’s a Fireball (4 mana card) tied to a 4/4 body for just 1 more mana. It’s great as a minion removal or a burn tool, whichever you need more at the time. But for either of those to work, you need to have a Secret up, so you might be forced to do plays that are a bit counter-intuitive at times.

That’s one of the more interesting considerations when playing this deck. You often want to play a Secret that’s not so much amazing at a given time, but rather one that will stick. For example, sometimes you might rather play a Flame Ward vs Control on T3 than let’s say Mirror Entity because you have Occult Conjurer in your hand. Yes, Flame Ward will be useless, maybe even until the end of the game. But it means that now your Secret synergies will be active and you still can use your impactful Secrets later, maybe they will even work better then. Notably, Rigged Faire Game is often the Secret that plays similar role vs Aggro, but this build doesn’t run it for budget reasons (more in the final section). 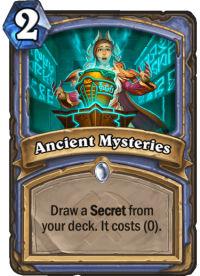 There’s one extra way to activate all those synergies without playing a “dead” Secret. I mean, yeah, you can technically wait until you can play both on the same turn for full mana, but that’s irrelevant until the late game (e.g. Secret + Conjurer is 7 mana). But a better way is Ancient Mysteries. Here’s a very, very important thing – you do not have to play the 0 mana Secret as soon as you draw it. In fact, I’d say that you should not do it most of the time. Save it for some extra synergies. Two best ways to use it is for 2 mana AoE with Arcane Flakmage (e.g. it can often clear Aggro’s board on T3-T4, or you can wait until T5 to play an extra Secret for 4 AoE damage which is nearly always enough for a full board clear) and – of course – activating the synergies I’ve mentioned above on the same turn. This way you can play a Secret that will likely trigger (e.g. Mirror vs Aggro) and still drop the synergy card, making it a really good swing turn.

And that’s basically your strategy – you mostly rely on those Secrets & synergies to win the game. How do you ACTUALLY win the game usually varies between matchups. Against decks like Aggro Demon Hunter of Face Hunter you will play reactively – you can’t just race them, because they will kill you before you can kill them. You want to control the board and after you’re ahead try to swing the entire game in 2-3 turns. You can’t take it too long, because a single Ice Barrier is your only form of life gain, you run no Taunts etc. – if you take too long, they will just kill you. You can use your burn cards as removal if necessary. Control matchups are different – in those you will play the role of aggressor and try to kill them before they can stabilize. In order to achieve that, you want to constantly put pressure on the board. Burn cards are great, but you can’t win the game with burn alone (technically you COULD, but only if your opponent wouldn’t gain life at all). For example, Occult Conjurer is an amazing card because it puts so much pressure. Even if your opponent removes a single one, you still have a 4/4 to smack him with (and next turn you’re likely to drop something else). That said, burn is still very important. Minions can usually only get you so far, and you might have to finish your opponent off with burn. Burn can also double-up as a removal, it’s a great way to get rid of minions, especially Taunts – it’s always better to get rid of them with a spell than sacrifice your minions (because minions can attack multiple times, burn is only one-time).

And that’s basically the whole story. Sadly the budget deck misses a very important part – refill – but more about it in the next section. 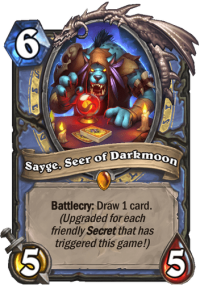 Like I’ve mentioned, what you’re missing most when playing budget version is refill. The only two cards you REALLY need are Rigged Faire Game and Sayge, Seer of Darkmoon – they’re a must-have if you want to play the deck at a higher level. While your perormance against Aggro will be similar either way (since those cards aren’t particularly good in those matchups), they’re simply key against slow builds. Rigged Faire Game will trigger nearly every time simply because you’re the one putting pressure, you’re not getting attacked. And then drawing 3 cards often for 0-1 mana (e.g. when “cheated out” with Kirin Tor or Game Master) is a massive boost. Sayge is kind of similar to what Aluneth used to be in the past for Secret Mage – in such a Secret-heavy build it usually draws you at least 3-4 cards, possibly even more. Aluneth could draw more in the long run, but the downside was that the draw wasn’t instant and that it had no board impact – Sayge is still a 5/5 minion, and that’s pretty huge.

Another card that you probably want to add is Jandice Barov. It’s not really important, but it’s just a generally good card that will boost your win rate slightly. Some builds also run Apexis Smuggler for even more value – again, the card works quite nice in slow matchups, and in faster ones you can just drop it on the board on T2 if you have nothing better to do. But those two are not nearly as necessary as Faire Game & Sayge.