Learn how to play this archetype with our Murloc Paladin Deck List Guide.

Our Murloc Paladin deck list guide for the Ashes of Outland expansion will teach you how to play this budget list. This guide includes Mulligans, Gameplay Strategy, Card Substitutions, and Combos/Synergies! 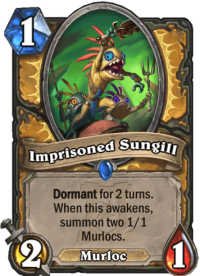 Let me start with one thing – Murloc Paladin is a better deck than I’ve expected. After the upcoming round or nerfs, it might actually become more popular and make a bigger impact on the meta. However, this budget version is missing a few key cards. I had to adhere to our own budget rules and limit myself to two Epics, no Legendaries and no Adventure cards, making the deck much weaker. Good news is that even the full build is not very expensive. You should be able to build it within 5k Dust (+some gold/real money for 3rd wing of Galakrond’s Awakening).

Murloc Paladin is not a new concept – for some reason, Blizzard likes to give Uther Murlocs and Murloc synergies. It never made much sense, but that’s how it is. Similar decks were viable a few times in the past. It’s a board-centered, aggressive deck which relies on the snowball potential of Murloc tribe. The more Murlocs you play, the stronger other Murlocs become (usually gaining some stats). The deck is rather simple and straightforward, but there’s still some strategy to it, especially with resource management.

Like I’ve mentioned already, your play strategy is rather straightforward. You want to flood the board with Murlocs, buff them and then try to kill the opponent. However, your opponents will do their best to prevent you from doing that. Yes, they will clear every Murloc you play whenever they can – even more so than any other tribe. 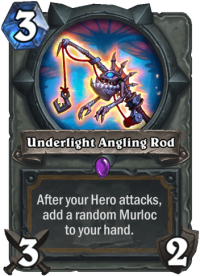 In the budget version, killing your opponent will be a bit harder, since you’re missing a Murloc Warleader. With our 2 Epics limit of budget decks, I had to pick between him and Underlight Angling Rod, and I believe that Rod is sligthly better. It’s a great combination of early game board control and value, while it can also be used as a “burn” damage later in the game. It’s the reason why you don’t run out of cards, and running out of cards is a really bad thing in this meta (if you play against Demon Hunter, they won’t really run out of cards, and slower decks run enough removal to handle DH).

In faster matchup, you really need to focus on the tempo. Try to play on the curve and put as much stats on the board as possible each turn. For example, dropping a Turn 3 Seer with no other Murlocs on the board is a better idea than just Hero Powering. Yes, it’s just a 2/3 for 3, but it’s better than having a 1/1 on the board. Once you fall behind, you won’t likely come back. The deck does run Consecration, which might come handy at times in those matchups (e.g. it’s really good against Demon Hunter), but unless you also have some minions on the board, you’re just going to spend a turn coming back and your opponent will develop again. However, if you manage to stay at least even on the board, you should be able to push the game in your favor. You play a lot of buffs, which are a great way to swing the game around. Try to buff minions which can already attack and get some good trades with them. In particular, an early Hand of A'dal can swing the game in your favor. For example, you might clear your opponent’s 1-drop with your own 1-drop while keeping it alive and well. 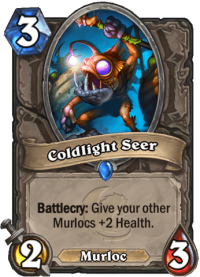 In slower matchup, your line of thought is a bit different. While you still want to play on the curve and get as much tempo as you can (especially in the early game, before AoEs come into action), you won’t have to fight against your opponent’s minions as much as against their removals. Yes, when they drop something you can try to trade it efficiently, but the point is that you will be ahead on the board most of the time. Now what’s important is knowing what kinds of AoEs your opponents play to play around them efficiently. For example, if it’s Turn 5 and you play against Galakrond Warlock, you might expect a Crazed Netherwing – 3 damage AoE. So what you might want to do is try to buff as many minions as you can out of the 3 damage range (e.g. with Coldlight Seer, or buff a single one out of range with Blessing of Kings). At the same time, you might want to calculate how much he can deal with Dark Skies (based on the number of cards in his hand) and also try to get your minions out of that range.

If you already have a solid board, you don’t want to play further into the AoE, but there are still a few things you can do instead. You can set up a Imprisoned Sungill (since it survives AoEs until it wakes up), you can play Murmy/Hench-Clan Hogsteed thanks to their Reborn/Deathrattle, you can drop Salhet's Pride, because even if it dies you will get 2 cards back for your trouble. Or you can just equip a weapon and smack your opponent with it. That’s a good way to put more pressure without playing minions.

Ultimately, weapons will be an important part of your deck and often a way to finish off matches. Early you will most likely use them for board control, but later, especially against slower decks, they will serve as a great way to damage your opponent without them being able to do much about it. Angling Rod in particular is strong, because you can smack and it will give you more value, but Truesilver Champion deals more damage. Hoard Pillager gives you a way to get your weapon back – usually Angling Rod – while also adding a 4/2 body to the board. With let’s say a Rod into Pillager curve, you will have value for days and you won’t likely run out of cards. And given that random Murlocs can also be from other classes, there’s a chance you will get an Underbelly Angler or Scargil, both of which are great. Not to mention that you might also get Murloc Warleader, which this budget build doesn’t have (although I strongly recommend getting it).

Like I’ve said at the beginning, the build is missing a few cards, but all in all even the full version is not that expensive. Here are the cards you want to put in to really make it work on the ladder, even in higher ranks:

And here are the cards you can cut: