Our Dragon Hunter deck list guide for the Ashes of Outland expansion will teach you how to play this budget list. This guide includes Mulligans, Gameplay Strategy, Card Substitutions, and Combos/Synergies! 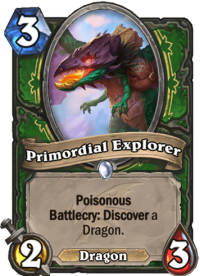 Descent of Dragons was an expansion, which pushed Dragon decks into the mainstream once again. And by far the biggest winner of that push (including Galakrond’s Awakening adventure) was Dragon Hunter. While Face Hunter was all the rage in the early Descent of Dragons, Dragon Hunter has mostly phased it out after a while.

Dragon Hunter is a very powerful Aggro deck. It balances very well between controlling the board and pushing face damage. Corrosive Breath is a great mix of both, and I honestly believe that Stormhammer is one of the strongest cards in Standard right now and it absolutely carries the deck. That’s the reason why I’ve decided to add two of them. While you COULD build it without any Epics (and replace Stormhammer with Eaglehorn Bow), I truly believe that your win rate would go down by a few % just from that change.

Overall, it’s a solid meta deck and one of the best ways to play Hunter right now. On budget, it’s capable of getting to Platinum, possibly even Diamond if you try harder, but before attempting a Legend climb I would replace a few cards with non-budget options first.

Playing the budget version of this deck is very similar to the full version. It’s a bit weaker in terms of tempo (since you’re missing a 0 mana Frenzied Felwing and your single target removal of Rotnest Drake), but it has similar offensive capabilities. You want to play aggressively and will often close out games around Turn 6-7, before some decks can even actually take off.

Your strategy is rather straightforward. Your goal is to maintain a good curve (that’s why mulligan is very important – missing a 1-drop, 2-drop or 3-drop will hurt you a lot), which of course heavily depends on what you draw, but not only. Dropping your cards in the right order, picking the right card from Tracking or Primordial Explorer can also make a big difference. In general, don’t be greedy – you’re not a value deck and you want to get on the board and smack your opponent as hard as you can. 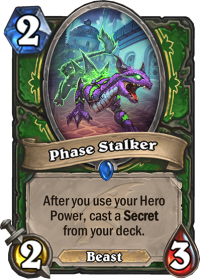 Gameplay itself is very different in faster matchups and in slower matchups. In faster matchups, such as against Tempo Demon Hunter, you can’t afford to fall behind on the board. With no real way to comeback (other than Explosive Trap, which is good, especially if you get it from Phase Stalker, but often easy to play around and doesn’t answer their bigger threats), your goal is to stay ahead or even on the board. You’re not a 100% face deck, so you DO want to trade minions, if the trade is beneficial to you. For example, if you can use Primordial Explorer’s Poisonous to clear a big minion, do it, because otherwise your opponent might trade his 3/2 into it and keep his bigger minion alive. Stormhammer is also important in those matchups, but you will mostly use it to control the board. While you take a lot of damage in the process, unless you fall in the range of their burn, it shouldn’t be a problem. Clearing stuff with a weapon while keeping your minions alive (so they can dish out damage) is great. Guardian Augmerchant is actually also pretty solid in faster matchups. You have two ways of using it – first is just straight up killing a 1 health minion (either finishing it off after a trade or just clearing let’s say a 2/1 your opponent played). The second one is hitting one of your minions and giving it Divine Shield to then trade for free. For example, if your opponent has a 3/3 on the board and you have a Faerie Dragon, using it on your 3/2 is a great play. You will be able to clear the 3/3 and still have a 3/1 in play, putting you ahead. 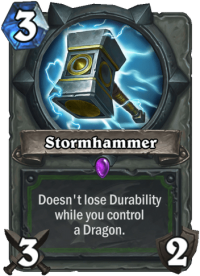 Playing against slower decks, however, is completely different. In those matchups, you’re the aggressor and you want to deal as much damage as you can before they can stabilize. The thing about slower decks is that you’re usually on a timer. The exact timer depends on their draws, but if the match gets to the late game without you winning (or being very close to winning), you might have a very hard time. They might start dropping big Taunts, heal back up, or you might just run out of things to play. Because of that, you want to play as fast as you can. The earlier you start smacking them, the higher your chance to win is. Which is exactly the reason why Stormhammer is such an MVP. Unless it gets removed, it can easily deal 15 damage by itself during a single game. Just keep it at a single charge and attack with it any time you drop a Dragon. If for some reason they can’t remove all Dragons from the board, that’s even better, because you have another free swing. While you want to focus on developing minions in the early game, in mid game you want to start adding Hero Powers to the mix. The reason is that while they can answer a minion, they can’t do anything to prevent damage you deal with HP. Instead of dropping an extra 2 mana minion, weaving in a Hero Power should end up with a better result. This way you also spread your board development across multiple turns, so if they drop a big AoE to clear everything, you still have more things to do in your hand.

Burrowing Scorpid is one of the budget choices and it’s definitely not an optimal minion, but it’s actually better than I have initially suspected. In faster matchups, you can use it as a “2 for 1” board clear – first you deal with a smaller minion and drop a 5/2 with Stealth and then you can trade into a second one. In slower matchups, the Stealth part will often be irrelevant, because you will want to attack face. But still, 4 mana 5/2 with what is basically your Hero Power is not bad. If they don’t clear it right away, 5 attack is a lot, and more damage you can deal out of hand is never a bad thing.

While the budget version of Dragon Hunter is okay, there are definitely some ways you can improve it – mostly through the Galakrond’s Awakening adventure. Which we didn’t include for obvious reasons – you can’t craft those cards, you need to buy the entire adventure, which we would recommend, but we realize that lots of players, especially budget/new players don’t own it. Anyway, here are the cards that you want to put into your deck to make it better:

And here are your flex slots that you can use to add the cards listed above:

And like I’ve mentioned already, if you want a 100% budget build WITHOUT any Epics, you can replace Stormhammer with Eaglehorn Bow, but if you can afford to craft Stormhammer (or you already have it), I would absolutely do it – the card is very important.