Our budget Aggro Demon Hunter deck list & guide for the Scholomance Academy expansion will teach you how to play this budget list. This guide includes Mulligans, Gameplay Strategy, Card Substitutions, and Combos/Synergies! 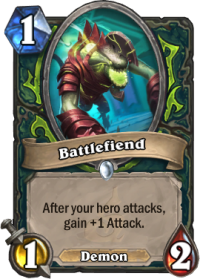 Demon Hunter class was introduced in Ashes of Outland expansion, and it quickly became a go-to budget class because of its powerful Common/Rare cards, as well as a Demon Hunter Initiate set players got for free. It’s an aggressive deck utilizing its 1 mana Hero Power as well as a plethora of cheap cards to kill the opponent as quickly as possible.

It didn’t really change much in Scholomance Academy compared to how it looked like last time, but with a few cards nerfed, they had to be replaced with new options – sometimes seemingly “weak” Neutral cards that work quite well in the build. As for the new tools it got. The deck was already great at cycling in the last expansion, and now it’s even better. Voracious Reader lets you refill your hand after dumping it on the board, while Skull of Gul'dan provides additional mid/late game card draw combined with tempo push (since most of your deck costs 3 or less, you’re likely to play your cards on the same turn you play Skull). The only other new card in this build is Demon Companion, which is a solid 1-drop that scales well as the game goes by – 2/3 of time it should add some extra damage to your board, potentially making a difference between your opponent surviving and you killing them.

The best thing is that the deck is nearly a full build – you can play it like it is and you should be able to climb to Legend if you play well enough. 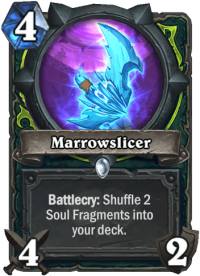 At the core, Aggro Demon Hunter is a very simple and straightforward deck. You want to stay on the board, keep putting pressure on your opponent with minions and Hero attacks, and then finish the game with a combination of minion damage and “burn” cards like Glaivebound Adept, Twin Slice and Marrowslicer. A proper curve is very important – you want to use your mana every turn as efficiently as you can. Luckily, the 1 mana Hero Power helps with that, because it lets you e.g. play a 3-cost card + Hero Power on T4, and while HP is not as good as playing a full card, it’s always some extra damage or a small removal.

Previously, hand management was pretty important, because the deck played a lot of Outcast cards. Right now it’s still important, but kind of in a different way. Yes, Skull of Gul'dan is still an Outcast card, but at 6 mana you can easily get it to the left side of your hand before you can play it. In the current, very aggressive version, the most important hand management aspect is staying with a relatively low amount of cards all the time. Voracious Reader is the new Jeeves – it offers a massive card draw opportunity (3 cards AND a 1/3 body for 2 mana), but only if your hand is empty. That’s why you curve is so low too – it’s easy to throw all the 1 mana cards and then refill your hand. Of course, you don’t need to get full value out of Reader to make the card worth it. Dropping her while drawing 2 cards is also great value. Sometimes it’s good to draw 1, especially since she provides a high priority target for the opponent, which means that they might ignore the rest of your minions to kill it. 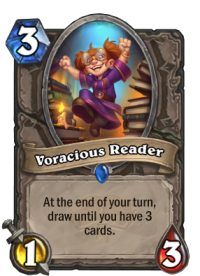 And that’s basically your main game plan. You play on curve, try to drop your hand as quickly as possible after getting Voracious Reader, push your opponent and try to kill them as quickly as possible. Do not give your opponent time to breathe – try to constantly pressure them. You can’t really deal with big Taunts, and you can’t deal almost any damage through them, so that’s your main downside. Try to kill them before they have access to big Taunts, and if they drop one, try to clear it with a weapon, Twin Slice or even Altruis damage – try to preserve your minions.

In fact, Altruis turns are probably the most difficult ones in the deck. You need to time the card correctly. Because of Voracious Readers, you don’t want to keep it in  your hand for too long. But dropping it just to deal 1 AoE damage is also not optimal. The best course of action is playing it right after Skull of Gul'dan. If you already have some board presence, you can save the cards you drew for next turn. Then you play Altruis and drop all the cheap / discounted cards from your hand, often dealing 5+ AoE damage. Not only it helps you clear your opponent’s board, but also gives you some extra reach.

Marrowslicer has an extra effect of shuffling Soul Fragments into your deck, but you can pretty much ignore. They will sometimes give you some extra healing, which might come handy in faster matchups, but the truth is that the card is played simply for a 4/2 weapon = 8 damage. It’s more aggressive than Warglaives of Azzinoth and since it’s cheaper, it’s easier to use with Voracious Reader. You could try to build a Soul Fragment deck with a few alterations, but stats seem to heavily favor builds without Soul Fragments so far. 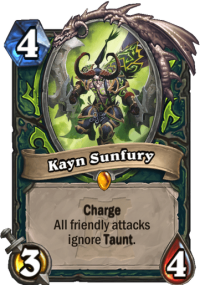 Like I’ve mentioned, the deck is really close to a full build. In fact, you only need a single Legendary – Kayn Sunfury. Despite its nerf (from 3/5 to 3/4), it’s still a good card – gives you extra reach and lets you kill your opponent through Taunts. If you already have it – you can replace Amani Berseker. If you don’t – unless you play to play a lot of Demon Hunter, I wouldn’t bother. The deck plays fine without Kayn.

There are still a few cards you might consider playing – Intrepid Initiate, Mana Burn (mostly an anti-Druid tech), Manafeeder Panthara, or possibly the new Lorekeeper Polkelt (works surprisingly well in the deck – it lets you draw both of your Skulls and then basically cycle through entire deck very quickly). However, those cards are only sidegrades, not upgrades. Which means that you can run them, but they might work better or worse than the current list depending on the meta. So, as you can see, you can have a nearly full meta deck on budget!