Our Egg / Tempo Warrior deck list guide for the Ashes of Outland expansion features one of the top lists for this archetype. This Warrior guide includes Mulligan Strategy, Gameplay Tips, Card Substitutions, and Combos/Synergies! 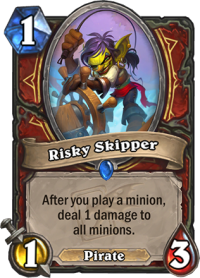 Egg Warrior, Tempo Warrior, also called Eggro Warrior, is an interesting take on the aggressive Warrior archetypes: not many decks with a fast strategy would opt to include Armorsmith, but that’s the post-Demon Hunter world we’re living in today. It’s an exciting and fairly complicated deck with a multitude of viable gameplans and a plethora of combo options which ensures it’s never completely out of a match until it is actually over.

Though it’s Serpent Egg that gets all the attention (and the naming rights), the true star of the show is Risky Skipper, a card which single-handedly enables most of the deck’s combo potential while also doubling as a strong board clear option as well against mid-sized boards. It’s certainly one of the most interesting tempo decks we’ve seen in recent memory, and it’s very fun to play as long as you don’t go cross-eyed from all the possibilities it has to offer. It was certainly good enough to hit Legend 1 in April!

This is one of the best decks for Eggro Warrior in Ashes of Outland. The deck list might still get changed or refined – if it happens, we’ll update it here!

Find more versions of this deck type on our Egg Warrior archetype page! 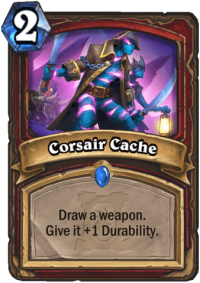 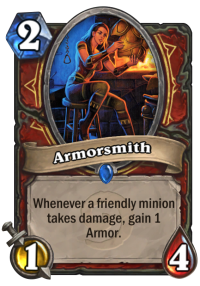 Eventually, you’ll have a monster turn with Risky Skipper and double Armorsmith, gain somewhere in the region of 15 armor while clearing their board, and you will inevitably go on to win the game from there. Your mission is to stay alive until you can set all this up, knowing you can’t rely on Taunt minions to block damage. Don’t be afraid to commit an Inner Rage to kill a one-health minion that would otherwise hit you in the face once or twice.

The usual control deck tenets apply here: keep clearing your opponent’s board, protect your health total and brutalize them once your setup is ready. Don’t prioritize face damage early on: your Armorsmith output is good enough to close out the game. Instead, leverage as much tempo as possible. Warmaul Challenger is an excellent early-game play (sssshhh: don’t tell the Demon Hunter players but dropping a naked Warmaul Challenger into their turn seven play is pretty good too), and so is Serpent Egg provided you have any sort of relevant follow-up. Your weapons (and by the same token, Corsair Cache) are also crucial here. Use every tool at your disposal to maintain board parity until you’ve got a Risky Skipper and an Armorsmith ready, then start preparing for the game-winning board clear setup. Bloodsworn Mercenary works as a pretty good alternative of the second Armorsmith in these situations. Bloodboil Brute also serves as a strong removal tool that you can splice in during the Risky Skipper turns to deal with your opponent’s biggest threat.

If you feel like you’re struggling in these matchups, try Injured Tol'vir in the deck – you can check out some other suggestions in the Card Replacements section of this guide below. 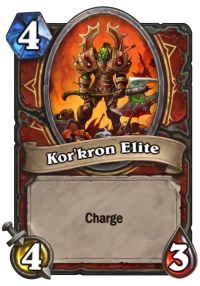 This is a tempo deck at heart, but the many finicky options available to you can make it somewhat challenging to play on curve and put out sustained pressure. Since these decks are good at clearing your board, you need to prioritize early face damage and look for alternative methods to deal the rest from that point on. Luckily, you have a multitude of options to achieve this goal.

Your next sneaky source of face damage in the mid-game comes from the interaction between Bomb Wrangler and Risky Skipper. You can potentially trigger two Boom Bots on an empty board and set up a third, with a potential for even more if you commit a Bloodsworn Mercenary or Teron Gorefiend to the setup. This can get you across the line by itself if you had a strong enough early game.

If that isn’t enough, you still have some burn damage setups to work with. The deck’s finisher of choice – apart from the weapons – is a combination of Kor'kron Elite, Inner Rage and Bloodsworn Mercenary. This makes twelve the magic number for both you and your opponent, and you should try to hold these cards back if at all possible, unless you expect the tempo generated from their use to net more damage than six. (What I’m trying to say is that you have my blessing to use Bloodsworn Mercenary on a damaged Serpent Egg or a Rampage-buffed Warmaul Challenger.) If you’re expecting the game to pan out like this, use Risky Skipper to set up as large a Battle Rage redraw as possible to find your finishers and extend the game as long as possible.

Though the featured build seems pretty much set in stone and it’s a fairly inexpensive deck to put together, there are nevertheless a few alternatives you can consider. Unfortunately you’re pretty much out of luck if you haven’t yet unlocked the Galakrond’s Awakening cards: Risky Skipper is core to this deck and cannot be adequately replaced. That said, there are a few tech options available to you: alternative builds run Injured Tol'vir for added defense against Demon Hunter plus further Bloodsworn Mercenary shenanigans. Imprisoned Vilefiend and Frothing Berserker are also worth considering if you don’t have a copy of Teron Gorefiend.