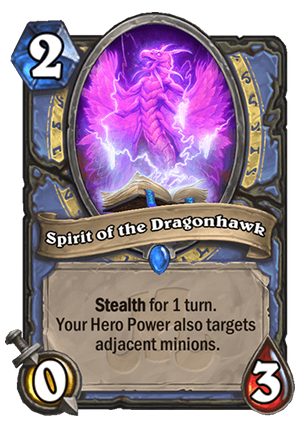 Spirit of the Dragonhawk is a 2 Mana Cost Rare Mage Minion card from the Rastakhan's Rumble set!

Spirit of the Dragonhawk Card Review

It seems like Hero Powers will be one of the Mage’s themes this expansion. However, as much as I really like the Mage’s Loa, this card seems a bit clunky to use. This + Hero Power is a 4 mana version of Shooting Star. It’s true that if you play it one turn, you can Hero Power again next turn (assuming it doesn’t die to AoE), but then it’s 6 mana for 2x Shooting Star – still not a great deal. In order to make it work, you really need your Hero Power synergies, such as the new Daring Fire-Eater. But then it’s basically the same thing as Cosmic Anomaly + Shooting Star, but it leaves a less scary board behind. Of course, you can add more pieces to the combo – e.g. Pyromaniac, but it makes it even more expensive and less consistent (8 mana 3 cards combo is not something you want to hoard in a Midrange deck like that). Then, cards like Daring Fire-Eater of Pyromaniac are quite mediocre by themselves, with no other synergies.

Of course, the dream is to have Frost Lich Jaina up, play this and shoot three one health minions. But let’s be real here – it’s hard to find a single 1 health minion against a good player, let alone 3 of them.

Regular (non-Odd) Hero Power Mage looks like one of the “deck recipes” of the expansion – cool synergy, fun gameplay, but not actually competitive enough, because it requires too many synergies and the outcome is not THAT good. But so far, Odd Mage looks a bit more promising, and it obviously can’t run this 2 mana card.