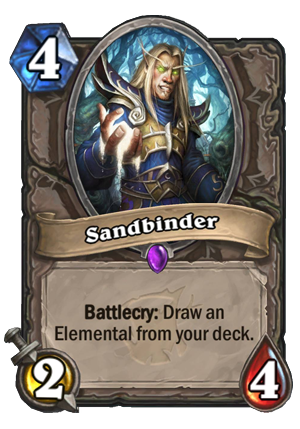 Sandbinder is a 4 Mana Cost Epic Neutral Minion card from the The Witchwood set!

Battlecry: Draw an Elemental from your deck.

This is a Gnomish Inventor that tutors a specific thing instead of drawing a random card. The same mana cost, the same stats. Tutoring is generally less flexible, but also more powerful in the right deck.

And so, if you play a deck with a vital Elemental that you want to draw as quickly or as consistently as possible, then this card will be an auto-include. For example, if you play a Shaman deck with a combo built around Grumble, Worldshaker. If you play some Priest combo that requires Radiant Elemental, this should also see play to tutor it.

Generally, in an average deck, this will be a weaker version of Gnomish Inventor, which already doesn’t see any play. But it might find its place in a specific deck you build around some specific Elementals. Or, if such a deck won’t see play, this card will also be never played.