Hearthstone’s newest expansion is right around the corner, and it can’t come soon enough – not only because of what many call the most stale meta in the history of the game, but also because of the beautiful troll lore that surrounds Rastakhan’s Rumble.

As the title outright states, a troll rumble will be held for God King Rastakhan, ruler of the Zandalari Empire. All troll tribes are represented through their respective troll champions. They lead one of nine teams; each team stands for one Hearthstone class, and are all featured by a particular loa. These loa, the spiritual deities which trolls have revered since the beginning of time, embody a certain fighting style. Let’s take a look at the troll champions, the loa, their origin and heritage! 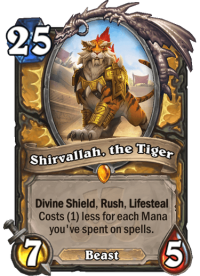 First off there are Shirvallah’s Tigers, the Paladin team. Named after Shirvallah, the Loa of Tigers, this team stands for honorable and more than confident fighting.

In World of Warcraft, Shirvallah is one of the loa that was held hostage in Zul’Gurub by the Hakkari, an evil troll tribe who worshiped the blood loa Hakkar the Soul Flayer.

Back then, High Priest Thekal and his colleagues were sent to Zul’Gurub to free the imprisoned loa, but they fell victim to Hakkar’s baleful plans. To finally free the loa, adventurers had to cleanse Zul’Gurub, and that really tells the story of one of WoW’s most well-received raid dungeons. Within the raid, Thekal arises as the High Priest of Shirvallah he always has been; however, he turns the power of the Tiger Loa against all that is good.

Nowadays, this Level 60 encounter can be solo-killed by every single end game character. However, it is still very well known to drop a rare mount called Swift Zulian Tiger, one of the most prestigious mounts up to this day. 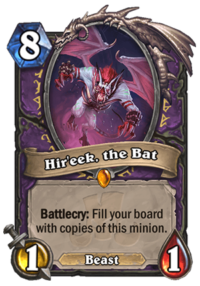 Hir’eek’s Bats will be the – no pun intended – the “Bad Guys” of the arena; led by their champion High Priestess Jeklik, they follow Hi’reek, Bat Loa and Lord of the Midnight Sky. Similar to Shirvallah, Hir’eek is also a loa of the Gurubashi tribe and was held hostage within their former capital Zul’Gurub.

The same goes for High Priest Jeklik, Hir’eek’s champion, and she suffered the same fate as all cursed high priests in Zul’Gurub, slain by the adventurers of Azeroth. Furthermore, Hir’eek played an important role in WoW’s newest expansion Battle for Azeroth. Always open to the dark magics, he fell victim to the blood god G’huun and his blood trolls, only to – once again – be taken care of by the mighty adventurers at the end of a long quest line in Nazmir.

Blood, dark magic, sacrifice – all these core abilities fit one and only one Hearthstone class, and that is why Hir’eek’s Bats will be the troll Warlock team.

Next there are Gonk’s Raptors, the rumble team that represents the Druid class. Wardruid Loti is Gonk’s high priest; she is also a member of the Zanchuli Council, a group of high-caste trolls that directly advise King Rastakhan himself.

Gonk, the Raptor Loa, is one of the most respected loa in Zandalari culture. He taught them to become druids in the first place, something that, back then, was very unusual, because druidism encourages the worship of not only loa but also other natural deities like Elune. That is why Loti and her loa Gonk are still somewhat controversial, especially within the high priest caste, causing them to become some sort of “lonely wolfs” within the troll culture. However, Loti is especially famous amongst the younger and more progressive generation of trolls.

Halazzi’s Lynxes is, from a lore standpoint, one of the most interesting teams in Rastakhan’s Rumble. They represent the Hunter class and are led by Zul’jin. Unlike the other before-mentioned loa, Halazzi, the Loa of Lynxes, is mostly revered by the Amani trolls.

The Amani once joined the Horde during the Second War, but departed quickly after a stunning defeat. Since then, the Amani have always been holding a grudge against the Horde and tried to reform within Zul’Aman, their capital.  In comparison to Zul’Gurub, Zul’Aman was only visited by WoW players for one reason: Fat loot. And that was written in the lore as well! A particularly greedy adventurer called Budd Nedreck persuades the adventurers of Azeroth to fight through Zul’Aman to get all those ancient troll artifacts. That raid instance also features fights against several loa such as Halazzi; the final fight, however, was against Zul’jin, Warlord and leader of the Amani tribe, who imprisoned all the loa worshipped by the Amani within Zul’Aman.

In the case of Halazzi’s Lynxes, the pairing between Halazzi and Zul’jin doesn’t really make sense on first sight. Zul’jin, during his time as warlord, has been a warrior through and through. However, it has to be noted that many troll warriors were also so-called “headhunters”, sometimes wielding spears instead of axes. But still – how could an Amani loa and their Chieftain not make a good fit?

Krag’wa’s Frogs most certainly are a crowd favorite. Who doesn’t love a big old frog that licks and leaps his enemies to death?!

Krag’wa, the Loa of Frogs, is mostly known for supporting Princess Talanji, daughter of King Rastakhan, in her fight against the blood trolls in Nazmir, just north of Zuldazar. Similar to Hir’eek, G’huun tried to corrupt Krag’wa, but he resisted. However, his followers weren’t as strong as him and were enslaved. In one of the main quest lines, the adventurers help Krag’wa to restore his ancient strength, which results in him defeating great parts of the blood troll army.

Not a lot is known about Zentimo, Krag’wa’s champion. We know that Krag’wa is his “master”, and that he is a witch doctor.

That is why it doesn’t make a whole lot sense to introduce Zentimo and Krag’wa as the Shaman rumble team from a basic Warcraft lore standpoint; however, frogs are very well known creatures to both witch doctors and shamans, and since Hearthstone only has the latter as a class, it fits just right.

Who we know a lot about though is Hex Lord Malacrass. He will be the champion of Jan’alai’s Dragonhawks, the Mage team. Being Zul’jin’s right hand (left hand would be more fitting), he managed to seal the loa essences, one of them being Jan’alai, in their troll champions. He was the second-to-last boss in the Zul’Aman raid, most famous for spawning several otherworldly servants and using spirit magic.

Jan’alai, the Loa of Dragonhawks, fits the Mage theme way better; as many Hunter players in WoW already know, dragonhawks breathe fire after all!

Akali, the Loa of Rhinos, is one of the few loa that are worshipped exclusively by the Drakkari, the ice troll tribe. During the WoW expansion Wrath of the Lich King, his appearance seemed to be very wild-natured; that is why the Drakkari tried to absorb his power and held him hostage in front of the gates of Gundrak, the ice trolls’ capital.

For the first time, a direct connection between a team and its champion, in this case Akali and War Master Voone, champion of Akali’s Rhinos, is not really obvious.

In World of Warcraft, Voone is a forest troll and has no ties to the Drakkari tribe. He can be found in the Lower Blackrock Spire as one of many mini-bosses. In the official Adventure Guide it says that he once was part of a splinter group that fought deeply within high elven territory during the Second War.

The only thing we know for sure is that Voone is a true warrior, using Cleave and Mortal Strike as abilities during his encounter. He also seems to be particularly wild, just like Akali, and that may just be enough for them to represent Rastakhan’s Rumble Warrior team!

The Rogue team is called Gral’s Sharks; their champion is Captain Hooktusk.

Gral is one of the more ancient loa worshipped by the Zandalari. Being Loa of the Sea, the Zandalari have particular interest in him being well-disposed towards them; wisdom and wittiness are his fortes. In Battle for Azeroth, he carried a very subtle but even more important hint with him: He knew that Queen Azshara has been in a very dark place recently, and many think that this place is the sunken city Ny’alotha, prison of N’Zoth. Since Azshara and her naga destroyed Gral’s temple in Zuldazar, he will seek revenge once she reappears.

Captain Hooktusk looks to be the only champion that is non-existent in Hearthstone lore. However, looking at Hearthstone in the past, it is nothing new that pirates in particular enter the stage of Warcraft lore in the Hearthstone universe first!

Bwonsamdi’s Zombies, the Priest rumble team, may feature two of the most well-received characters in Battle for Azeroth.

First there is Bwonsamdi, Loa of Death. Mostly known for his precocious voice lines after you die in-game, he is always on the lookout for new souls to enslave. In Battle for Azeroth, he makes an appearance after King Rastakhan gets killed by the Dark Prophet Zul, who tries to reenact the ancient troll empire.

In crackling anticipation, Bwonsamdi seeks to take the old king’s soul with him – but Rezan, the Loa of Kings, interferes, so that Rastakhan can return back to life and take revenge. That, of course, got him lots of bonus points within the Warcraft community!

Then there is Princess Talanji, daughter of King Rastakhan. Loyal to her father, she seeks out the Horde to help the trolls fight against the enemies that are about to take over their lands. Over the course of Battle for Azeroth, she forms her own expedition to fight back G’huun and his entourage.

Interestingly enough, Talanji is a priestess of Rezan, the Loa of Kings – which can be described as some sort of counterpart to Bwonsamdi! One should not reason that this team doesn’t make sense – it could be quite the opposite! However, we can only hope that there will be some sort of logical explanation of why Talanji serves as Bwonsamdi’s champion. Maybe Battle for Azeroth’s Patch 8.1 will be able to somehow explain this contradiction…