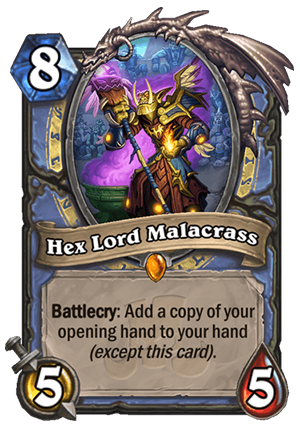 Battlecry: Add a copy of your opening hand to your hand (except this card).

This is a really interesting effect and a reason why I like Hearthstone – effects like that are impossible in paper card games, and aren’t very popular in other digital ones. Yet HS tries to experiment with stuff like that all the time.

Your starting hand is your post-mulligan hand. 3 cards if you’re going first, 4 cards if you’re going second. So this card is basically an 8 mana 5/5 that draws you 3-4 cards (technically it can draw 2 cards if it’s in your opening hand AND you go first, but that won’t be the case often). Or even better – it doesn’t DRAW them, it GENERATES them. That’s a big deal in matchup where fatigue is a big deal, but you want to have as much value as possible (e.g. Big Spell Mage). That’s a really solid value generator on paper. The question is, however, does Mage need it?

Faster Mage decks definitely don’t, it’s way too slow. But maybe Control Mage of sorts? Like Big Spell Mage? The thing is, even though you want to mulligan for a cheaper cards, in a deck like that you will still end up with some biggest stuff in your hand most of the time, which you wouldn’t mind doubling at all.

It’s also a great card in slow Mage decks that are going for the hand synergies (Astromancer, Meteorologist), since it fills your hand quite nicely.

The deck I would see it fitting most is Reno Mage in the Wild. The deck doesn’t mind more value, and you often mulligan for cards like Reno Jackson or Kazakus, and getting second copies of those is something you would just love.

So all in all, it will depend on how greedy Mage decks can get and whether they will need more value generators or not. Because this is an AMAZING value generator for a slower deck – puts some tempo on the board, gives you a bunch of cards and generates them instead of drawing. I would not play it over The Lich King. But maybe over Sindragosa? Sindragosa is better after Frost Lich Jaina, but definitely worse value-wise before her. The card might not see play right now, but the rotation will take a lot of high value, late game plays Mage currently has, so it might actually shine then.

Card rating: 5/10 right now because Mage has other good late game options, but might be better when they rotate out