By far the most controversial aspect of the Doom in the Tomb event turned out to be the reintroduction of Evolve, a card which catapulted the already powerful Shaman archetypes beyond anything else the new metagame had to offer. This is, of course, not the first time the card played a part in a meta-defining Shaman deck, and the fact that its return proved to be so problematic should be indicative of card design considerations for the class going forward, even if no immediate solution is in sight. 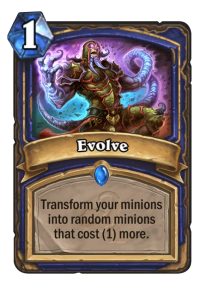 Doom in the Tomb promised craziness on the ladder. It was pretty much expected that the returning cards would become stars of the show, carefully selected deep cuts and fan favorites from different eras of Hearthstone. (And Renounce Darkness. Because why not.) While it’s fine if these “temporary” metagames – which I’d expect to become a staple going forward – are a little bit out of whack from a balance perspective, the card buffs of the Rise of the Mechs event produced a much more interesting ladder environment in the end, even if the innovation period lasted a little while longer.

As it was immediately clear, Evolve slotted perfectly into the existing Quest Shaman deck, requiring little adjustment or innovation to supercharge its capabilities. The quest reward already ensured the long-term gameplan of the archetype against even the grindiest control decks, guaranteeing enough resources and tempo to close out almost every match, but now it has become a lot more effective at putting on the pressure by generating a large board out of seemingly nowhere, utilizing both the synergy with Mogu Fleshshaper in the pre-event decklists coupled with the inclusion of Desert Hare in the new ones. The end result was brilliant in a way that was awful. Per the latest Data Reaper Report, over 30% of the ladder is comprised of Shaman decks at the time of writing, almost as high a portion as Hunter’s was after the Wild Growth nerf at the end of last year.

This is, of course, a brand new situation for Team 5: re-introducing synergistic Wild cards to the Standard environment was always going to be a gamble, even if they’ve planned ahead and considered the implications of these specific cards on the existing metagame, the complete lack of viable counters to the currently popular Shaman decks was clearly something they haven’t planned for. It’s just not a desirable gameplay state for anyone, except for those grinding for the new Thrall portrait.
However, there’s a natural solution to this problem: the eventual end of the Doom in the Tomb event.

Survival of the Fittest 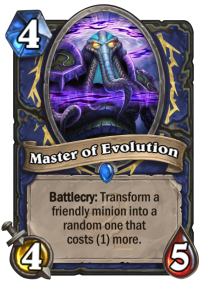 As such, though it’s quite unlikely that Evolve gets adjusted in any meaningful way, its overbearing effect on the current metagame could very well inspire a change in Shaman’s card design going forward. “Evolving” minions as a mechanic has always been carefully used in the class – though minion transformation has become a strong part of its identity over the years, only Evolve, Unstable Evolution and Mutate had this specific effect (alongside Thrall, Deathseer in Knights of the Frozen Throne). We also had Master of Evolution, but between being single target and having high mana cost compared to other similar cards, it was never problematic. It is easy to see why those effects were limited, though: upgrading your minions in this fashion basically serves as a slow-acting mega-Bloodlust, ensuring massive chunks of repetitive damage and a steady path to board control, often with enough extra stats to bypass whatever AoE spell can be cast at around the same point of the match. Unlike The Storm Bringer, a very expensive Legendary spell, Evolve is only a measly one mana, to boot.

There is, however, a catch: you need to have the right targets to evolve to truly make this effective. During the days of One Night in Karazhan, Shaman’s dominance was in part due to the stat-vomiting possibilities created by Thing from Below and Doppelgangster, one of the many reasons behind Evolve’s enduring relevance. After Saviors of Uldum launched, it’s doubtful Mutate would have seen play without Mogu Fleshshaper, much like how Desert Hare didn’t have a chance in hell until Evolve was rotated back into Standard. These specific interactions are what allow the class to go above and beyond the rest, generating a truly unfair board state on a reliable basis with just two cards at most.

Any potential solution revolves around whether you treat Quest Shaman as a problematic deck or just this specific interaction as one that needs adjusting. Keep in mind that these are not the sort of permanent buffs which were handed out as part of the Rise of the Mechs event: the Wild cards will be rotated back to where they came from with the arrival of the next expansion anyway.

All this makes it even tougher to find an elegant solution to the matter than usual. You don’t want to butcher the existing quest/token-based Shaman decks – which were strong but not omnipresent elements of the metagame before the Doom in the Tomb event began – for the short period that Evolve remains in the metagame before the new set arrives. By the same token, nerfing the card would be pretty brutal overkill considering it’s a non-factor in Wild. Move it out before the event ends? Do you then rotate in something else for Shaman or leave it be? Also, how would it look like that the cards you brought in to spice up the metagame turned out to be too effective?

Not only is it a complicated matter, it’s also one which will be solved by the passage of time. As such, I feel it’s likely to be swept under the rug without a balance adjustment, but make no mistake: lessons will be learned from its dominance on the ladder. As it stands, cards like Evolve are truly “feast or famine” by nature, at least in terms of the available card pool. If it has minions like Desert Hare (or Doppelgangster) available to combo with, it’s guaranteed to be game-breaking – otherwise, it’s not particularly efficient. Seeing how individual minion-evolving effects like Master of Evolution or Mutate were perfectly acceptable by themselves – though Master of Realities was one of the most messed-up cards in the already crazy Taverns of Time Arena event –, this little experiment in Doom in the Tomb will likely discourage Team 5 from printing similar tools in the future.