Though I ended up a few wins and few percentages short of my goal, this was a much more fruitful week than the previous one. Now that the meta has begun to settle and everyone seems to be playing a variation of the same Demon Hunter archetype, it’s time to do what I enjoy the most: tinker with the established meta deck to find some minor edges in specific matchups. Problem is, that might be more challenging than usual in the Tempo Demon Hunter mirror.

Not quite 220, but if you squint enough, it looks like 210, which is still in line with the “ten wins a day” plan. Fortunately, the average Demon Hunter match is just as quick as I have hoped, which gives me hope that I can reach 300 by the next time you hear from me.

The One Demon Hunter Deck

Since the Kael'thas Sunstrider/Inner Demon builds have all but vanished since the nerf (at least that’s one prediction I got right, along with the second nerfs), there’s basically just the one shell for the class, the tempo approach with various different power spike/payoff tools used in different builds. In many ways, this reminds me of the Kobolds and Catacombs days where Druid decks had an extremely strong and flexible ramp/draw/stall toolkit and could basically tack whatever wacky finisher they wanted to on the top of their curve for the endgame. You could not identify which one you were playing against until the point it was basically too late to adjust your gameplan. 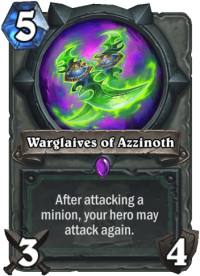 To be fair, Tempo Demon Hunter is not that bad because the flex spots are not the finishers. The early game plays out in an identical manner across each of the archetypes and their overall strategy is the same across all builds, and the difference between a Priestess of Fury curve-topper or a set of Questing Adventurer shenanigans doesn’t change your gameplan against them in a fundamental way. However, it does go to show the limitations of the class in its current state, with basically just the one archetype on offer after the nerfs and little to no reason to believe that any “Big Demon”, Highlander or other sort of builds could emerge until the release of the next set. With a lot fewer cards available to work with compared to the other classes, the innovation potential remains limited – and with their one deck performing so well, it becomes a potentially futile quest to chase a few extra percentage points in the mirror match based on your tech decisions.

If you like playing with a strong tempo deck – and I do – it’s a decent gameplay experience. For those of us who’d perhaps prefer playing with the nine original classes as well from time to time, I can see how this would become mind-numbing over time: 47% of my matches were Demon Hunter mirrors in semi-dumpster Legend last week even after the two rounds of nerfs. There’s also the very real concern that the cumulative effects of the instant card nerfs with potential further future changes later down the line could leave Demon Hunter without any viable archetype. With just the one – albeit a very strong option – available, I’m actually quite worried about Illidan’s long-term prospects. The class was only just released and it already saw seven of its evergreen cards nerfed. Whatever Team 5 had planned for it, there’s no doubt it will need to be adjusted for the upcoming set releases.

For now, we’re stuck with various flavors of Tempo Demon Hunter. So where do we go from there?

Variations on a Vengeful Theme 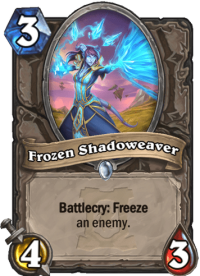 To this day, my biggest deckbuilding triumph comes from the Curse of Naxxramas days where I managed to find a significant edge in the Undertaker Hunter mirror match by making a build around Nerubian Egg and Feign Death (coupled with Dire Wolf Alpha and Defender of Argus for complete shutouts). It was just as good as the normal build against everything else, crushed the mirror, and granted me a top 100 finish on the December 2014 leaderboards.

(Goodness me I’m getting old. The one wrinkle in time where I was provably better than Kolento /s)

I’m hoping for a similar experience at some point with this deep dive into VENGEANCESTONE, but it’s safe to say it hasn’t quite happened yet. With such a large burn potential in the late game and limited healing options, it’s tough to find anything which cracks the code. However, I was overjoyed to see a high Legend build with Questing Adventurers, and I think I now have a good handle on which are the real flex cards of Tempo Demon Hunter and which alternatives seem to be worth experimenting with. Interestingly, Chaos Strike has emerged as a core card in all tempo builds, and some tools that were previously seen as auto-include have fallen out of favor over the course of last week.

To me, the Frescha build seems like the way to go. Considering most other viable meta decks also belong to weapon classes, double Frozen Shadoweaver seems quite reasonable to me. Now that we’ve figured out that neither Spectral Sight nor Satyr Overseer are auto-includes, maybe we can find those few missing percentages in the mirror. To me, the most notable aspect of his build is the replacement of Battlefiend with Blazing Battlemage as a like-for-like swap, which, as we’ve discussed above, could very well be a masterstroke.

The Grind Conundrum: Quantity Over Quality 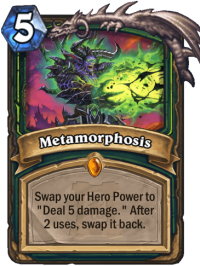 Readers of this column have probably guessed that I spent most of my time with the Questing build once it cycled back into the meta. At one point, I had a 10-2 record with it but unfortunately it decayed to a 55% overall record for the week. At least now I have a very good idea of the build I want to explore next week, with the sole goal of improving my mirror match winrate (23-17 last week, 87-87 over the entire season – pretty much the reason I haven’t climbed as high as I wanted.) So what’s next? The problem with grinding for 1000 wins is that it necessarily involves a lot of playsessions and gameplay without a 100% focus, and that has really strained my winrate.

Fantastic sessions were followed by absolutely awful ones with clearly identifiable misplays – the fact that you can attack again after using up your Warglaives of Azzinoth if your hero has spare attack has been an especially tough gameplay wrinkle to internalize, and I occasionally prioritized an extra Questing Adventurer stat over an added Altruis the Outcast trigger too – so it’s probably time to slow down somewhat. Not in terms of the climb, but in terms of playing: just like how my chess rating spikes up as we go from slower to longer time controls, there’s no reason not to game out the possibilities during the 90 seconds available.

Let’s see what the Lifecoach cosplay and some nasty tech cards can do as I make my way to 300 wins.