This was a pretty laid-back week all things considered, mostly due to my time with Battlegrounds to figure out the latest patch. (Turns out Illidan even makes a surprise appearance in the new meta! Sort of.) Have no fear though, there were actually a few minor developments with Tempo Demon Hunter, and I’ll run you through the details so that you can find those extra percentages of VENGEANCE. 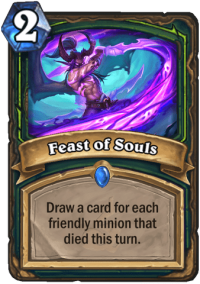 Most of my Hearthstone playtime last week revolved around Battlegrounds, that weird alien game mode where Illidan didn’t dominate from the start and didn’t actually warrant a nerf. (You’ll recall how Demon Hunter had monster winrates all across Standard, Wild and Arena until the multiple rounds of nerfs and the micro-adjusts got it back in line. Well, this was never the case in BGs: stayin’ alive is pretty difficult with even the best of builds and only a strong case of night fever would make you think that it’s among the strongest of heroes in the format.

Okay, this was a little bit forced even by my standards. The point I was trying to make is that Illidan is pretty bad, and yet, there’s a pocket in the current Battlegrounds meta where his otherwise mediocre ability can become quite useful. As a baseline effect, your left- and right-most creatures attacking at the start of the combat is surprisingly irrelevant, but the current BGs environment features many broken builds which immediately scale in stats with Mostrous Macaw at the start of combat, making a guaranteed first attack a whole lot more valuable than it normally would be.

This ties in nicely into the challenge of properly evaluating any power or effect in a game: anything can work well with the right support mechanism and every optimal build is related to a saddle point (ie. a local maximum) instead of any ultimate peak. Even Illidan’s Battlegrounds Hero Power can be good – and by the same token, even Demon Hunter could be bad in Standard. We’ve seen many such cycles in the past: Shaman’s Overload was considered a net negative, then Tunnel Trogg was brought along. Paladin’s secrets were hot garbage until Mysterious Challenger did something that was none of our business. It’s these ever-shifting sands which make card games interesting, and one should be careful with throwing around the word ‘objectively’ when evaluating builds. It does have its place in the conversation but in a much narrower way than you would perhaps expect. 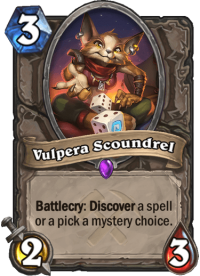 I don’t usually discuss Hearthstone esports as part of these articles, and my own interest in the scene has rapidly diminished with every passing GM season, even though I welcomed the system’s introduction and I still believe that at its core it’s the best setup you could have for a competitive 1v1 game. However, with only token efforts to maintain lower levels of competition, a way too high impact of tiebreakers and individual matches, or the absolutely asinine way SilverName qualified for Worlds a few weeks ago.

Beyond all this, there was a tweet from TicTac (who, ironically, has “If you don’t BM DH players as much as you can you’re doing something wrong” in his Twitter profile) which really got to me:

Imagine your full-time job coming down to a demonhunter mirror

The impact of first-versus-second in the Demon Hunter mirror is well-documented, and I myself spent a lot of time dissecting in these weekly columns. Realistically, when Hearthstone competitions always come down to the wire, you have to ask whether it’s the game’s skill ceiling or the tournament format which limits the way to separate the wheat from the chaff. Conquest has always produced a layer of counter-queues with a hefty amount of RNG mixed in, and as much as I appreciated the idea of Specialist, its execution turned out to be incredibly unpopular.

Long and grueling tournaments should not come down to single games, especially where play order decides so much of the proceedings. People remember Game 5 of the 2018 World Championship, with the on-curve Arch-Villain Rafaam and all the shenanigans that followed. I remember Viper missing the winning line with Zoo in the opening game, a victory which would have saved us from that shallow spectacle. We all know where Team 5’s preferences lie.

Way back when, the arguments about valuing drama over consistency and excellence made sense. There was real money on the line and lots of eyeballs glued to the screen. It was a stupid concept but it worked. But now, with Hearthstone esports shunted away into the deep dark corners of YouTube, only featuring a few dozen players on a regular basis playing for such little money almost all of them prefer to focus on streaming instead, how about actually devising a more rigorous format?

Rant over. Now, onto the decklists.

Chewing it Down to the Bone

Four different builds emerged over the course of the previous week, each minor iterations on XiaoT’s version which I deemed “standard” in the last edition of this column. Crimson Sigil Runner and Spectral Sight were the targets across the board, signifying the awful conundrum Tempo Demon Hunter players have found themselves in ever since the Priestess of Fury nerfs: how do you include sustain in your build? XiaoT’s version (and many previous iterations) relied exclusively on quick cycling to get the job done but that’s getting less and less effective an approach with better-refined Druid and Priest builds plus the emergence of a slower Warrior build.

Hence the return of Vulpera Scoundrel, a card we’ve seen as early as the first round of nerfs in certain Chinese builds. The logic is sound: the small spell pool of Demon Hunter makes the discovery effect really quite consistent, and the flexibility offered can help you out in many different matchups, albeit at the cost of tempo. This week also saw the nigh-universal adaptation of Bonechewer Brawler as a sticky two-drop, which is such a no-brainer I can’t believe I was experimenting with Temple Berserker instead. The end result is basically the same: another early buff target for Beaming Sidekick that punishes your opponent for not completely clearing it in one fell swoop. This card has a higher base Attack, Health and Taunt. What was I thinking?

None of these changes warp the core Tempo Demon Hunter playstyle, and the real question you have to answer is how aggressively you want to disrupt your opponent’s plays. Herosfunky’s build include two copies of Mana Burn instead of Vulpera Scoundrel, and it’s certainly a viable option to just throw into the deck – regular readers of the column will remember how I always considered it to be a woefully underrated card. Other players like PocketTrain (who hit #1 Legend on EU and NA), Sobek and Emushi preferred the flexibility of the 3-drop.

Illidan still remains a strong threat in the metagame but is no longer the monstrosity it originally was – though Demon Hunter is still topping the win charts in Standard per the HSReplay data, it feels like the field is a lot more hostile in high Legend than it has ever been before. Having played a few games with Priest last week (forgive me for the transgression, it allowed be to clear all three quests in one fell swoop), even that matchup seems to be a lot more debilitating than it previously was. This is the part where the real job is to find those extra percentages by improving your decision-making rather than trying to revolutionize the build: it is the task I set for myself for this particular week now that I had my fill of Battlegrounds.