Once again, a new expansion brings us a new Arena meta: and as it’s become customary by now, doing well in Hearthstone’s limited format has just as much to do with your gameplay fundamentals and drafting skills as your understanding of the systems Team 5 employs behind the scenes to manipulate the offering odds, some of which have greatly changed since the beginning of the Year of the Dragon, albeit without little accompanying fanfare.

With the launch of Saviors of Uldum, the pool of cards available Arena has also been changed from the Rise of Mechs event to the following:

The return of Journey to Un’goro means that some of the most powerful cards ever to appear in the format are once again back, and it’s likely that they’d have a disproportionate impact on the Arena meta if not for the fact that many of the Saviors of Uldum cards are off the charts in this game mode.

What are buckets and why do they matter so much?

Since March 2018, the drafting system in Arena is no longer based on the rarity gem of the different cards, and the offerings are instead organized based on “buckets”. Originally, the idea was that cards of similar strength would be offered alongside one another to make drafting decisions more meaningful, and this approach is what the rest of these systems are based on. These buckets partially overlap with each other and are set by the developers, occasionally updated based on new data or a change in the Arena card pool. Cards from the best and worst bucket have an offering rate penalty added upon them. Any class-specific micro-adjustments made are applied atop this bucket system. 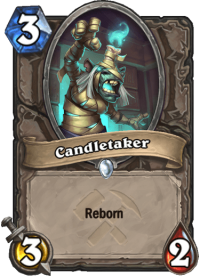 However, crucially, these buckets are occasionally modified based on data collected about the players’ drafting behavior, and moving cards across these buckets is generally based on draft rate, not winrate. Perhaps even more significantly, Iksar has recently confirmed that the new goal with the “bucketing” system is to create interesting picks for the average player, not to have cards of equal strength offered alongside one another. In certain cases, not even this can explain certain offering decisions: for instance, Candletaker is offered one bucket below Scarlet Crusader in the original offerings, much like how Sunreaver Spy is treated as a strictly worse card across all classes than River Crocolisk. Since the class-specific micro-adjustments are removed across rotations, balance can be weird soon after a new season starts.

Whether you think this is a good approach or not, its effect is undeniable: since objective card strength assessment is no longer a measure of success, certain cards will inevitably be offered alongside vastly inferior alternatives, which means that everyone who’s in tune with the game will be obligated to pick it. This has a massive, cascading effect on the Arena metagame leading to same-y decks at the higher wins where the players have a good understanding of this setup. Logically, this also means that “misbucketed” class cards also railroad you into specific archetypes – if a card is so much better than the ones it’s offered alongside, you will always pick it, and if it’s one that encourages a control strategy, you’ll be obligated to draft control decks for that particular class.

The strengths and weaknesses of this system is heavily debated in the hardcore Arena community, but for our purposes, all we need to know is which cards are offered way below the strength level it should realistically be. These are the ones you almost always have to choose when drafting and be mindful of at all times when trying to figure out your opponent’s plays. Team 5’s policy about providing this information has been inconsistent, and they’ve opted against revealing the buckets this time around. The community’s data-collecting endeavors usually result in a good enough estimate to work with, and the more egregious bucketing errors are very easy to identify either way.

For drafting purposes, it’s important to know how the different cards’ offering odds are weighted. Recently, the lower-rarity cards are once again offered at a higher rate – just like they used to be in the past with the old drafting system which was entirely based around the rarity gems – and datamining seems to suggest that there is currently no set-specific bonus for the Saviors of Uldum cards, at least where the Commons are concerned.

Key neutral cards of the Saviors of Uldum Arena meta

All in all, the high power level of the Saviors of Uldum cards from an Arena perspective means that the gameplay experience is much more swingy and less reliant on early-game tempo as the Rise of Mechs meta was. This also means that you will often struggle to identify what to play around due to the sheer volume of back-breaking options. As a rule of thumb, metas like this incentivize you to take more risks, especially if you don’t have a board flip tool available to you. That said, most of the cards listed below can easily blow you out of the water if you’re not prepared for their arrival. The real issue here is that you often won’t be able to prepare for them even if you try. Also, keep in mind that Reborn triggers after Deathrattle effects! This fairly illogical gameplay element can directly impact certain trade-related decisions. 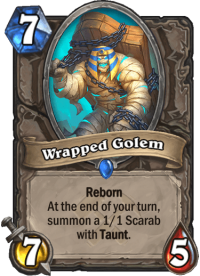 Wrapped Golem – It’s no exaggeration to suggest that the entire Arena metagame revolves around this one card: while it has zero application in Constructed, it’s a monstrous pile of stats that is very difficult to remove in its entirety. You require seven damage in three different increments the moment it hits the board, and it only gets worse if it gets to stick around and generate additional Scarabs. Arena veterans may remember how good Obsidian Destroyer was for Warrior – now there’s a strictly superior Neutral option in the card pool. Not only that, but it is bucketed prohibitively low, so much so that it’s actually in one of those buckets which get an offering penalty due to the supposed weakness of the card contained therein. The fact that Wrapped Golem is still omnipresent at higher wins is a testament to its incredible strength, and it also means that once it’s inevitably moved to a higher bucket, we are actually going to see even more of it in the Arena.

Vulpera Scoundrel – This unassuming-looking card compares quite favorably with Gnomish Inventor – an already viable draft choice in the Arena – as discovering a spell is often much stronger than drawing a card from your deck. The fact that it also found a home in certain Highlander Mage builds should tell you everything you need to know about its strength. 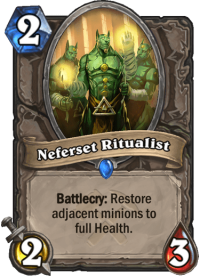 Neferset Ritualist – A monstrous reward for a successfully established board lead, this card also doesn’t sacrifice any stats for essentially turning a minion kill into a cost-free spell. Every time you don’t resolve a contested board state, you’re risking a huge punishment by this card.

Quicksand Elemental – A somewhat less insane tool when it comes to enabling value trades on the board, but this also has a massive impact on the minion combat that is the bread and butter of the Arena.

History Buff – A vanilla-statted early-game curve card with an ability that you are basically guaranteed to trigger as the game goes on: it would be a fine choice even without the text, which makes it an obviously great choice in the current Arena rotation.

Rogue (55.8% winrate per HSReplay) – A lack of micro-adjustments will always greatly help Rogue: its fantastic hero power (especially with how it impacts Reborn minions) and great slate of evergreen cards will inevitably push them high – even Plaguebringer turned out to be a decent addition to the class’ plethora of removal tools. Even without EVIL Miscreant, it will keep doing its usual thing.

Hunter (52.9% winrate per HSReplay) – Great card quality in Saviors of Uldum carried Hunter to a clear second place, with removal options like Desert Spear and Swarm of Locusts allowing for ultra-efficient damage-dealing with little to no overkill, while Ramkahen Wildtamer brings consistent card advantage to every build of the class. 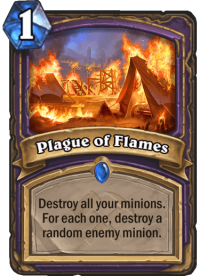 Warlock (50.9% winrate per HSReplay) – Arguably this is a surprisingly low winrate considering the Zoo-friendly cards in the pool and the insane removal option that is Plague of Flames. Don’t let the scary card text fool you: you’re looking at a one mana Twisting Nether, in a fairly low bucket to boot.

Mage (50.5% winrate per HSReplay) – Once again, Mage is the RNG/highroll class with Puzzle Box of Yogg-Saron representing the dice-rolls mid-game and the Arcane Flakmage-based Secret drafts doing the same in the picking stage. Getting a free quasi-Consecration on tap is basically an instant game-winner, but it does force you to pick up otherwise mediocre cards in the form of the Secrets, making it a potent but inconsistent archetype with a low floor and an obscenely high ceiling.

Paladin (49.2% winrate per HSReplay) – As vanilla as it gets, Paladin offers little opportunity to innovate in drafting or gameplay right now, and its simple tempo- and buff-based gameplan is simply outclassed on card quality by the top two, though it remains a viable (and fairly simple to play) option in the Arena going forward.

Priest (46.0% winrate per HSReplay) – The first of the four classes that are clearly in a lower tier, Priest still struggles to get on the board and stay there, having little in way of answers to strong Reborn-based minions or the unrelenting aggression of the many Rogues and Hunters in the field. 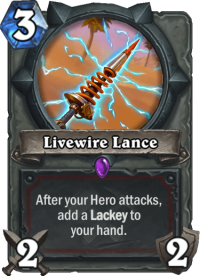 Warrior (44.3% winrate per HSReplay) – Rejoice, for Warrior is no longer the lowest-winrate class in the format! Still a shadow of their former selves, but they now have enough control tools (card generation and AoE) to at least be able to compete. Note that weapons are even better draft picks than usual due to the surprisingly low amount of such cards in the class pool – not only that, but Livewire Lance is simply just great by itself.

Druid (43.5% winrate per HSReplay) – A huge fall from grace. For a very long time, Druids were at least viable based on a ubiquitous token-based strategy – which has now been seriously hurt by a ton of neutral AoE options in the pool – , and an overall drop in card quality coupled with comparatively quite weak removal tools makes the class an undesirable pick in general. As good as Oasis Surger is, it’s just not good enough to carry Druids by itself.

Shaman (42.7% winrate per HSReplay) – Ouch. There’s no value available for Shaman and no option to set up with a consistent aggressive gameplan. Unless you’re a big fan of the class, avoid them for now.