Magic Mirror is the second boss of the first wing in One Night in Karazhan. The Magic Mirror was enchanted to compliment the guests, but without Medivh around it has started to insult them instead! Magic Mirror’s Hero Power generates a lot of 1/1 tokens so cards with Deathrattle or activations upon summon (e.g., Knife Juggler) or particularly powerful against it. 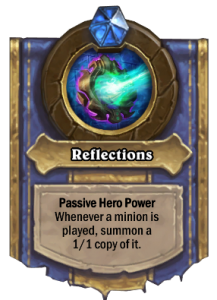 Magic Mirror can be a bit stressful if he’s able to stick Sorcerer's Apprentice or Flamewaker for more than a turn or two. You’ll have to be able to deal with those minions right away or he’ll eventually destroy you with spells and blasts from Flamewaker. He also carries Archmage Antonidas in the late game which makes him potentially dangerous if you run out of removal.

Magic Mirror can be defeated pretty handily again by Mill Rogue. Much like Silverware Golem, Magic Mirror uses Looming Presence, but also adds Arcane Intellect which makes him even more susceptible to Fatigue. The big worry with Magic Mirror is that you’ll have to avoid his secrets namely Counterspell which can foil your Gang Up or Preparation.