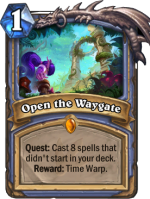 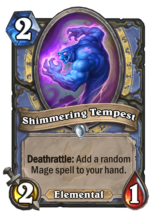 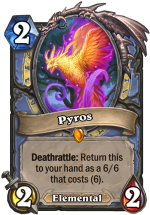 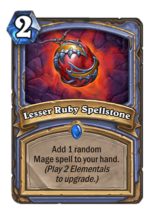 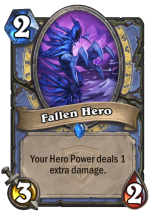 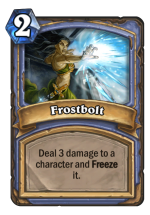 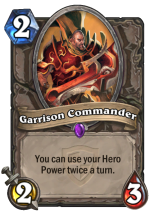 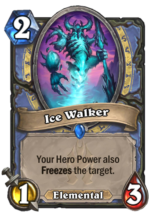 YOU NEED TO KEEP THE QUEST AT MULLIGAN OTHERWISE GENN WON'T TRIGGER.

Shimmering Tempest and Pyros are good early drops and you don't mind if they die to your opponent's early removals.

Lesser ruby spellstone is good to keep if you have already Shimmering Tempest, Pyros or Ice Walker. Frostbolt is good to deal with more resilient minions in early game but use your hero power instead if you can. Fallen Hero, Garrison Commander and Ice Walker are good to play early if you think they'll probably survive.

Having a less expensive hero power, thanks to Genn Greymane ,  is even better when your hero power is more powerful. If a Baku-Genn deck is sadly but obviously impossible, mage is lucky to have many even-costed hero power imoprovers as Fallen Hero , Ice Walker, Garrison Commander and the fantastic Coldarra Drake.

Abuse your hero power as much as possible, it’s a reliable tempo swing that cost no cards. Your hero power can allow you to quickly take control of the board, killing your opponent’s early drops without needing to trade yours. Against more slow, controlling decks, complete the quest with your spellstones, Shimmering Tempest, Steam Surger, Primordial Glyph and Kabal Chemist. When you have completed the quest, you can use Time Warp  to kill your opponent with an extra board swing, some spells, or by storming your opponent with Coldarra Drake and Fallen Hero. Leyline Manipulator and Emperor Thaurissan can allow you to play Time Warp and Coldarra Drake on the same turn or to complete the quest earlier by playing the spells you got from your spellstones.

You usually want to play Pyros or Shimmering Tempest on turn 2 or 3, since you don’t mind if they get removed by your opponent’s early removals. However, you can play Fallen Hero, Garrison Commander or Ice Walker as soon as your think they’re safe, but you may also want too keep them for the late game, as for the Coldarra-Fallen Hero combo. Quest need to be kept at mulligan for Genn’s trigger to activate and can be played as soon as turn one, but if you don’t have any good 2 drops, ping on turn one then Quest + ping on turn 2 is probably better. Your one-mana hero power gives you more flexibility on your play order, so be creative and try to use every mana crystal at its full potential.

You shouldn’t worry too much about playing your elementals on curve since the only cards relying on elementals are Lesser Ruby Spellstone and Steam Surger. They are both usefull to complete the quest, so try to keep some elementals to trigger them but don’t panic if you fail to.

Blizzard : very good wrath and one of the only ones that are even-costed in mage.

Frostbolt and Fireball are obviously just to good to bet set aside from the decklist.

Other cards that could fit in the deck, card replacement:

Kodorider, Boneguard Lieutenant and Dalaran Aspirant could be good for their synergy with your hero power. Frost Giant could also be used as a late game win condition or as a 8 damage burst combined with Time Warp.

Water Elemental and Ragnaros the Firelord are even costed elementals that are great in general.